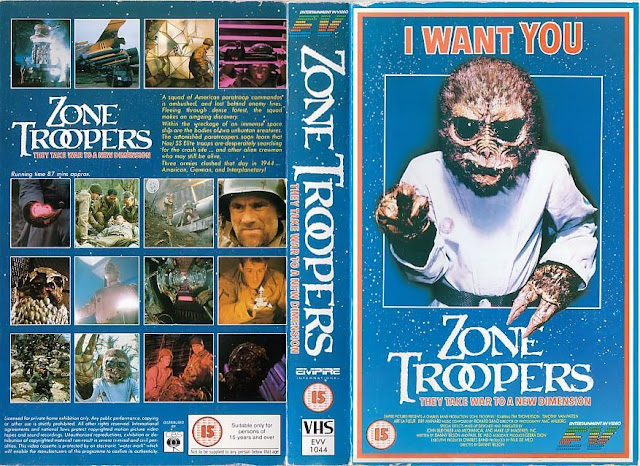 If you've never seen Zone Troopers, but you also like your war films served with a dash of alien silliness, than this '40s-set, Italian-shot production has been eluding you ever since you began developing your weird, weird proclivities.

Starring Lord of the B-Movies Tim Thomerson, as well as Hitler, Zone Troopers is an homage to so many things: the war film, the sci-fi film, Hogan's Heroes, and more. Not carnage-ridden enough to capture the essence of war, not horrific enough to fully exploit the visuals of invading aliens, but entirely silly and spoofy enough to lovingly capture that Hogan's Heroes absurdity, Zone Troopers is a film made to honor bygone eras of cinema where it was okay to slap a half-dozen men in ludicrous space costumes and film them as they stumble through the brush of an Italian wood. That Zone Troopers somehow not only exists in the world in general, but now exists in high-definition, continues to prove that the world is just one big, ol' mystery. 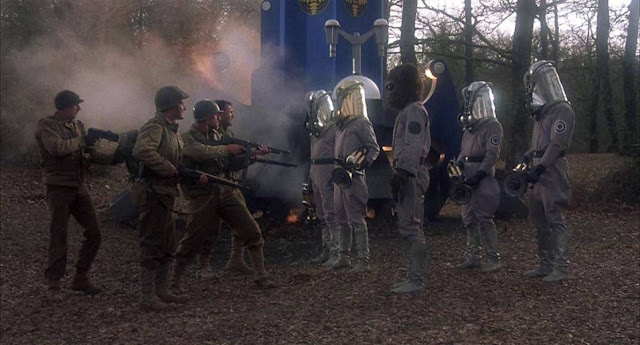 It's hard to critique such a quirky construction as Zone Troopers, considering every tongue was in every cheek during the genesis of the script. Van Patten and LaFleur's performance are Vaudevillian perfect, at times overdoing it as if they were starring in a stage production instead of a film, and this would be fine except that their takes don't quite mesh well with Thomerson's more reserved and gruff take on Sarge. The script itself manages to be amusing at times, but even at a scant running time of 86 minutes, the film still somehow feels like it's stretching this oddball concept - U.S. Military and Aliens vs. Nazis - to the breaking point.

Its obvious golden-age cinema inspirations aside, if Zone Troopers were attempting to serve as an allegory for anything at all, that remains to be seen. However, one aspect of the film remains interesting: when the soldiers meet the alien crew for the first time, only one of them sports the fly-head, crab-mouth creation which receives the most prominence during the film. Because of the film's very low budget, creating additional masks was out of the question, so instead they tweaked the remaining alien designs by spreading silver paint across their unmasked faces. The interesting thing earlier mentioned: these aliens are given blonde hair and blue eyes. What's too obviously a parallel to the "master race" the Nazis were trying to create is never fully realized, so whether or not this was a happy/unhappy accident committed during production, or if such a parallel was purposely included but fully lost within the cheesy confines of a cheesy film, only those who made the film know for sure.

Zone Troopers is about American soldiers teaming up with aliens to fight Nazis. You either know you want to see that or you don't. 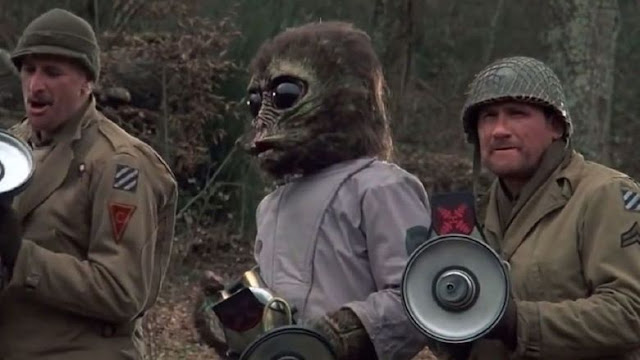