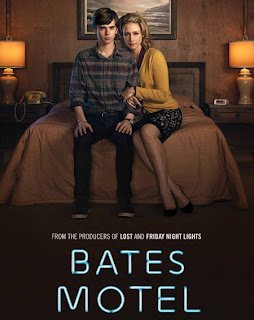 Like it or not, Bates Motel is back in business. Based on the four-film Psycho series beginning with Alfred Hitchcock's legendary original, itself based on the novel by Robert Bloch, Norman Bates is about to go off his rocker...again.

"Bates Motel" explores the early years with Norman (Freddie Highmore) and his domineering, over-protective mother, Norma (Vera Farmiga). After the untimely death of his father, mother and son pack up their car and head to the prime piece of California real estate Norma was able to buy at a steal. It's not long before the Bates begin to meet the locals...including one Keith Summers (W. Earl Brown), whose family had built and then subsequently owned the Bates' new property for generations, and is none too happy to see it under the care of outsiders. Couple this with the girls at school showing Norman a sudden interest, and Norma begins to feel like she is losing control. Her plan for a fresh start is threatened by the unhinged Keith and her control over Norman looks as if it's slipping.

This was tried once before...in 1987 (between the third and fourth Psycho entries.) Starring Bud Cort and Tank Girl from Tank Girl, Bates Motel tried its hand as a pilot but ended up being a one-off TV movie due to audiences' sheer disinterest in the subject matter. In the movie, a fellow inmate from Norman's insane asylum (Cort) apparently inherits the former Bates Motel and accompanying house from his crazy friend and attempts to re-open it for business. Who knows why. Murders happen. Blood flows. Moses Gunn is there, having an awesome name. I guess other stuff. Attempts to watch the 58th generation VHS rip posted on Youtube is a Herculean task of patience, so I can't say I was ever able to sit through the whole thing.

But that's all moot, seeing as how "Bates Motel" is being tried again...only we're going back in time...to the present(?).

I chose to call this a "reaction" rather than a review because it's tough to review the very first chapter of what has been planned as an ongoing series. Not a miniseries, mind you, but an honest-to-gosh television show. We've barely scratched the surface of where the show-runners plan to go, so it's tough to pass judgment on what's essentially a nugget of an idea soon to materialize.

So, what was my reaction? 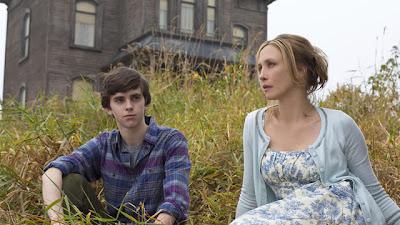 I was hesitant upon realizing the show was being set in modern times. It's strange to see a modern-day prequel to a film made - and which very much reeks of its year - in 1960. But already I can see what the show-runners are attempting: with Norma's collection of somewhat antiquated dresses, Norman's rather drab ensemble and outdated puffy haircut, and with all the very old house furnishings that came with the house, and which Norma claims they'll toss as soon as they can afford to get some other things (but will likely be sticking around), there is going to be more to this show than a fish-out-of-water, the boy-next-door-is-a-killer pulp tale. It's going to be the old culture clashing with the new. Hitchcock's original film played up the isolation of Norman and his mother, especially after "they moved away the highway." So since we're technically not at that point yet, we need to find another way to isolate the Bates - and if not geographically, than culturally. Oh, sure, Norman already has an iPhone upon moving to their new home (a mistake, if you ask me), but beyond his own mother, who also has one, who do you think he ever called with it? Because of this culture clash, I find the modern updating a little more forgivable  The Bates exist in the modern world, but in their own time. It's too early to tell how this will play out, but it's an interesting choice.

Vera Farmiga is one of her generation's most unfairly uncelebrated actresses. The Departed likely put her on the map, as well it should have, because she's great in the Boston-set crime piece, but she's been holding her own since and struggling somewhat to be re-recognized. She's certainly not a stranger to playing the mother of a somewhat...aloof child (see Joshua and Orphan), but this time she gets to show off her own brand of crazy. Not that we've yet to see any of this craziness per se - this is, after all, only the pilot episode - but something is there, simmering just under the surface. It's handled perfectly subtly, and Farmiga seems to be doing a good job of playing her role right down the middle - she's not all there, and you can somewhat tell, but we're not rooting against her yet (if we're ever meant to.)

The jury is still out on Freddie Highmore as Norman. He seems, at best, adequate for the time being. This might be the most high-profile project he's been a part of since 2005's Charlie and the Chocolate Factory. That coupled with the jump to television has made the struggling thespian a little too willing to show off his chops. Some of it works, but some of it borders on embarrassment. Not helping him any is the sometimes awkward dialogue (ie, "There's a man on the floor lying in a lake of blood! What do we do, mother? We have no idea what to do!")

Confessing my ignorance on details of the actual production, the show creators have either opted to film exteriors on the original Universal black lot to include the infamous house and motel, or they have done an admirable job of recreating it - including the house and motel interiors. Either way, good on them. The mere idea of updating the Bates house, forever sitting atop its perch, is blasphemous, and I'll definitely cop to some movie geek chills seeing the Bates house and motel again after all these years.

Oh, and for the record, does Norman seriously meet five gorgeous girls and is taken out for a night on the town by simply sitting on a bench and listening to classical music? The fuck?

Only in the world of make-believe... 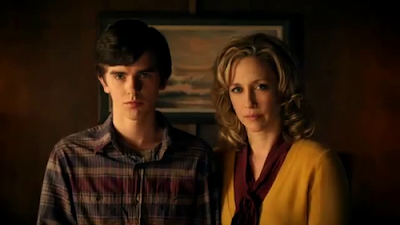 Surprisingly, A&E seems to be going ahead with the suggestive incestuous undertones that were only alluded to in the original film, and which became more and more direct in each successive sequel. Nothing too obnoxious - at least so far - just a mixture of slightly unnatural mother/son closeness and a couple suggestive glances... although the soliloquy Norman delivers to his mother to close out the episode might blow the lid off my usage of "nothing too obnoxious."

And that is where my main point of contention comes into play: The relationship between Norman and his mother is essential - it is the driving force to both of their madnesses, and it will make or break how the show plays out moving forward. All during this pilot episode, Norman has made it a point to act out, defy his mother's wishes (and orders), and attempt to forge his own identity. He meets new people rather easily considering the show wants us to buy he is an outcast, and for the most part, the girls swoon to him like crazy (which will likely rile up the "jealous and angry boyfriend" character trope we've seen so many times before). And yet...after Norman experiences a taste of this new life, in which gorgeous girls give him the time of day and he effortlessly makes friends and nothing remotely traumatic happens to him...why does he just opt to leave it all behind for his mother? There's no catalyst - no clear reason why he does so. There's no reason present why this new life just isn't for him. Arcs like this hinge on a moment for a character to realize they were wrong to think they could leave it all behind, but we just never understand why Norman does, and it was a rather weak way for the episode to end.

So what would Alfred Hitchcock think?

Hitch, who is back in a big way recently with this, his titular bio pic, and his less than flattering portrayal as a misogynistic prick in HBO/BBC's The Girl, would appreciate the casting of Highmore - at least in theory. Like Anthony Perkins in the original, Highmore is a handsome if somewhat awkward looking kid; rather unassuming and harmless...at least on the surface. For anyone familiar with Robert Bloch's original novel (it's been ten years since I last read it), Norman Bates was not a primp, skinny, and handsome fellow, but rather described as fat and hideous - a man who no woman would ever consider a feasible partner in any sense. It was Hitch who decided to cast the handsome but plain Tony Perkins in the role, changing not just the character's face, but his dynamism and his drawing power. (As an aside, while the novel does contain a motel room shower murder, it's not dozens of stabs as depicted in the film's iconic scene, but just the one - in which Marion Crane is decapitated by Norman's blade.)

Additionally, citing one particular scene featuring a urinating cop, let's just say Hitch would appreciate the black humor as well, of which he was a master. From a director's standpoint, however, he would appreciate nothing. (Granted, we're in television, here - not film - but even "Alfred Hitchcock Presents" showed a little creative flair from time to time.) Nor would he appreciate the pilot hitting the ground running without taking time to build the Bates' madness. If anyone could milk the inevitable, it was him, and he would call the show's attempt to get right into it cheap and unsatisfying.

As a show free from its lineage and judged on its own merits, it's a decent first trek into scripted narrative for A&E. There's already enough ongoing drama to engage viewers not looking for growth to a previously established character, and there's enough grue to keep horror fans satiated, along with some not-so-subtle shout-outs (Coach Carpenter! Sheriff Romero!), and, of course, plenty of pretty faces. As for me, I'll tune in from time to time to see what's going on with Norman and his mother, but regardless of where they take this show, and regardless of how realistic or fantastic they make it, there's one thought that will always be looming in the back of my mind: Norman Bates' monologue to Marion Crane in the original film is all the back story we ever really needed - summed up neatly and effectively in just a matter of minutes. Because of that, I fear that "Bates Motel" was already irrelevant before the opening credits ever rolled.

Make up your own mind when "Bates Motel" premieres this Monday on A&E.