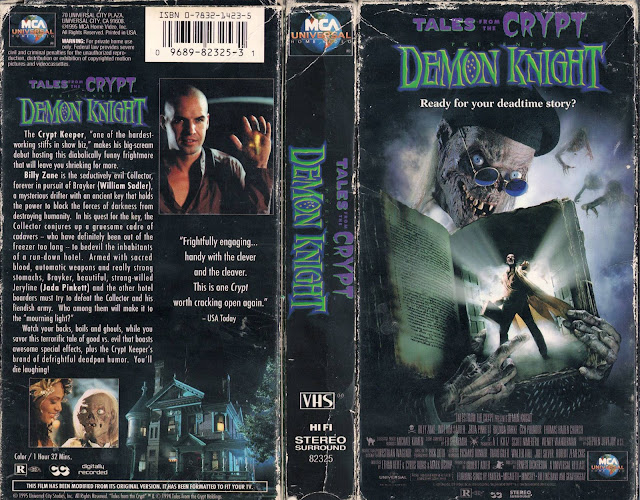 It was the summer of 1995. I was about to enter the fifth grade, but by then I was already a total horror junkie, much to the chagrin of my very worried mother. Efforts on her part to prevent my delving into the horror genre were met with refusal, dismissal, and probably a lot of whining. By this point in time, I'd worked my way through the entire Halloween and Friday the 13th franchises and was halfway through Hellraiser. But such viewings had to be done in secret. Should my mother throw open the door to our finished basement and descend the stairs to put in a load of laundry, I had to quickly shut off the tape of whatever horror VHS I'd been secretly watching and pretend instead to be watching one of those courtroom television shows or whatever happened to be on during that 3:00-5:00 weekday block. I was fooling exactly no one with this maneuver, but she was likely satisfied by my attempts. In her mind, at least I knew I wasn't supposed to be watching it.

My parents decided they wanted to take an overnight trip during that summer, sans kids, so my brother and I were dropped off at my uncle's for the weekend. It was a pretty cool and relaxed affair - my uncle's ideas on what were suitable movies and TV shows for kids were a bit more liberal than my mother's - so when my cousin announced she would go to the video store and rent some movies for us, I jumped at the chance.

"Can you see if they have Demon Knight?" I asked. Chronologically, I don't remember what came first: my devotion to HBO's Tales from the Crypt television series, or my obsession with collecting the 1990s' reprint run of EC Comics' Tales from the Crypt, The Vault of Horror, and The Haunt of Fear. I just knew that Demon Knight was out there in the world on blocky VHS, and I needed it in my eyeballs, stat.

"There's nothing bad in that, is there?" my uncle asked, merely out of obligation.

"It's about dummies," I lied. (Although it was kind of true. There was a dummy in there, after all.)

And so my uncle gave my cousin the nod of approval and off she went. She later returned with a pile of junk food and a big plastic VHS rental case for Tales from the Crypt Presents: Demon Knight.

And we all watched it together: my uncle, my brother, a few cousins, and myself. 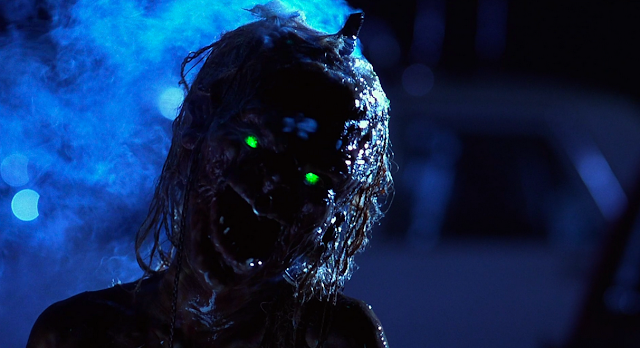 What followed was ninety of the most exhilarating minutes of my life, as my straight-edged, non-horror-loving family sat in total slack-jawed shock that little unassuming me was into such ghastly things: body mutilation! heads being punched off! clomping dummy jaws! electric sex! a room filled with tits! Dick Miller!

The room was astounded that such a movie even existed in their world; and had it not been for me, in what circumstances would they have ever laid eyes upon it?

But what permeated through that room for one of the silliest, ghastliest, most taboo-shattering communal experiences ever to happen among unsuspecting family members was tantamount to how the theatrical experience must've been prior to the invention of the cell phone.

How crazy would this movie get?

How far would it go?

Is that Lowell from Wings?

The horror genre has been a big part of my life, and there are certain titles I will always hold in higher regard than others, for they were my gateway films. They were the titles that made me realize horror was my life, and no matter how good or bad they got, I would love them in equal measure.

Demon Knight is one of those titles. 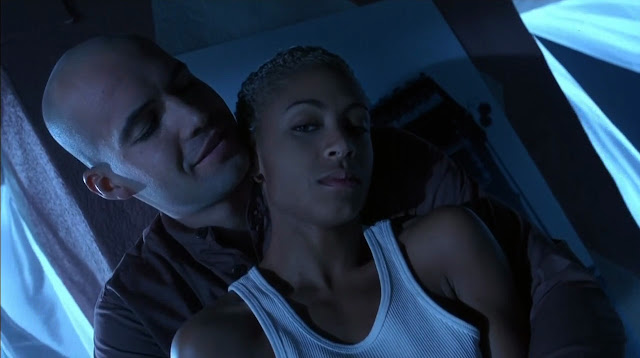 Never had there been such a successful leap from small screen to big by the time Demon Knight wrenched free from its 30-minute constraints to unleash on audiences a full feature film of demonic debauchery, gruesome violence, the blackest of gallows humor, and wobbling dummy heads. Nothing was lost in translation. The chaotic sensibilities of the show, the unashamed look at violence and pulpy storytelling, and the nudity - oh, heavens, the nudity! - all survived that trip from television screens to theatrical exhibition. Demon Knight has everything: unrestrained violence, thrilling action, sexual titillation, excellent performances, and C.C.H. Pounder throwing up directly on the camera. Who wouldn't love this?

Director Ernest Dickerson, who only had two films under his directorial belt at this point (he'd been a longtime DP for Spike Lee), seems like he were born to take on the horror genre. (Well, sort of.  He's also responsible for Bones - the awful Snoop Dogg urban horror film, not the awful forensics show for white people.) Dickerson's visual design is fully informed by the comic book aesthetic: blues for dusky interiors, browns for the war flashbacks (the staging of which seems heavily inspired by the covers of Frontline Combat, EC Comics' lesser known imprint), and let's not forget the neon green demon blood. Nearly every frame of Demon Knight is decked out in bold and vibrant comic book colors, tending to favor blue more than anything else. Brief flashbacks to the Christ crucifixion, or the marauding demons with their glow-in-the-dark eyes creeping around like raptors while set against the blue/black desert night sky, enforce his talent for capturing compelling images. He also chose a hell of a cast. There are no signs of the typical executive producer throwing his cast-preference weight around (more on this during the Bordello of Blood review). When William Sadler plays the hero and a pre-Titanic Billy Zane plays the villain, you know these were actors chosen specifically by the director for their talents and their appeal. They weren't chosen because of their box-office draw or their recognition among audiences. Additional names like C.C.H. Pounder, Thomas Haden Church, Charles Fleischer, and a pre-fame Jade Pinkett (Smith) confirm that the best possible actors were chosen for their roles, and not for their marquee value. And that's amazing, because that hardly happens anymore. 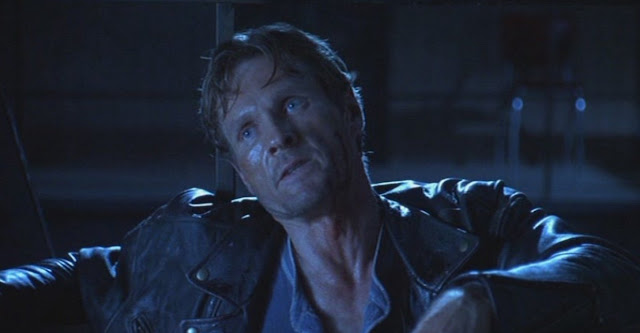 Demon Knight, to this day, remains an absolute favorite. The perfect flick to play on Halloween, or late at night when the whole world is quiet, Demon Knight is one of the funnest horror films to come along throughout the entire horror movement. Only when horror films turn the tables on their viewing audiences and take on a full-meta approach (Scream, The Cabin in the Woods) are when it seems safe for these audiences to admit they had fun at the theater. But there were no self-awareness gimmicks needed to tell Demon Knight's story. It didn't need to be in on the joke to be fun. Based on grisly comic books from the 1950s, Demon Knight isn't ashamed to be what it is, and doesn't hide from its point of origin. It exists only to be thrilling and entertaining and titillating, and that's exactly what it does. Don't even fight the smile that forms at the corners of your mouth when watching it. Don't act like you're above seeing demons drip glow-in-the-dark neon blood all over the ground as they shriek and smash in all the windows. When Billy Zane is out in the desert doing his best Beetlejuice impression and calling his soon-to-be victims "fucking ho-dunk, po-dunk, well-then-there motherfuckers!," just ENJOY IT, because this film was made for all of us.

Films like Demon Knight barely exist anymore. And when they do, they're called "throwback" and "homage" and "grindhouse," because of the rarity in which they come into being. Tales from the Crypt is a solid brand with a built-in appreciation, and so it's a shame that the second attempt at bridging the gap between television and features would be with the miserable Bordello of Blood - a film so heinously bad that it would spell the end for Crypt-branded features. While there has been an ongoing attempt by M. Night Shyamalan to reintroduce Tales from the Crypt to a new generation, so far nothing has manifested, so all we have is what's come before: the comic line, the British feature adaptations, the HBO series, and then its subsequent features. There's a lot of good in that legacy, and some not so good. Demon Knight is among the best. 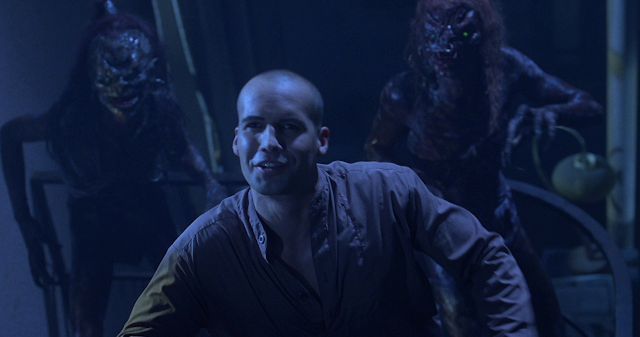