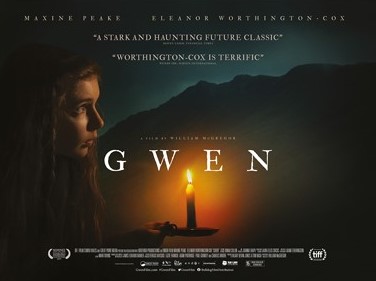 With Gwen being marketed as a Shudder Original, and released to video from the genre-friendly RLJ Entertainment, it would be easy to assume it’s an out-and-out horror film. Its own synopsis includes the words “malevolent presence,” and the cover alone shows a gloomy and dim image of a young girl clutching a crucifix in front of a roaring fire. Having watched the film twice now, I’m hesitant to label it as a horror film, though the act of watching it definitely conjures horror (in a good way). Thanks to its period setting, its ease at earning and establishing dread, and its focus on the slowly dissolving family unit, Gwen comes off as a cinematic soulmate to 2015’s The Witch, another film I was hesitant to label as horror…and Gwen contains even less horror than that.

Despite that, Gwen is a solid, well-made, and eerily authentic feature from writer/director William McGregor. Every inch of its running time feels absolutely genuine. The actors, especially young Eleanor Worthington-Cox (The Enfield Haunting) as the title character, sell the desperation and despair of this poor family undergoing every possible hardship: the father is missing in action, the mother, Elen (Maxine Peake, Black Mirror), is suffering from a strange illness that causes her seizures, and the family is barely making enough money to scrape by. Bureaucrats in town continue to pressure Elen into selling off the only asset they have left — their house and farm — but she refuses, saying it’s all they have left — that it’s their home. Meanwhile, Gwen takes over her mother’s duties and tries to sell some of their farm’s produce in the town’s marketplace, but shoppers avoid her as if she has a catchable curse. 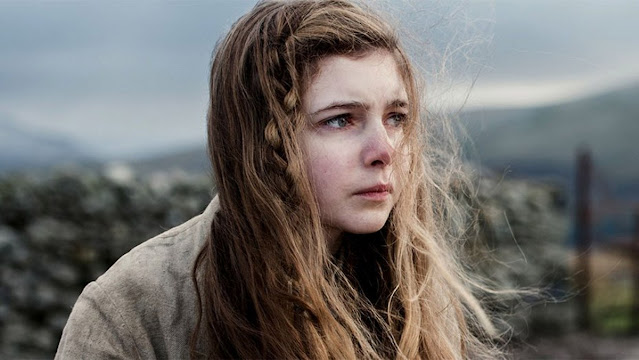 The moment Gwen begins, the viewer too easily slips into that world, and at no point does something “movie” happen to rip you out of the world that McGregor has created. Again, similar to The Witch, the dedication to making that world feel as genuine and realistic as possible is a total success, and it’s every bit as effective as A24’s eerie romp with Black Phillip. From the wardrobes to the accents and especially to the production design, it’s one of the most authentic period horror films you could ever see.

As for the horror aspect, where Gwen may lack in more typical horror scares (The Witch comes off damn near mainstream when comparing their horror content), it more than makes up in wallowing despair. Make no mistake: Gwen is certainly not a feel-good movie. If you have patience for slow-burn tales, you’ll enjoy watching it, but you won’t enjoy how it makes you feel. At times, it feels like a triathlon of how poorly things can go for a single family. Its ending, as well, comes off abrupt; when the screen cuts to black at the end, you’ll be waiting for it to fade into the next scene instead of directly into the closing credits. 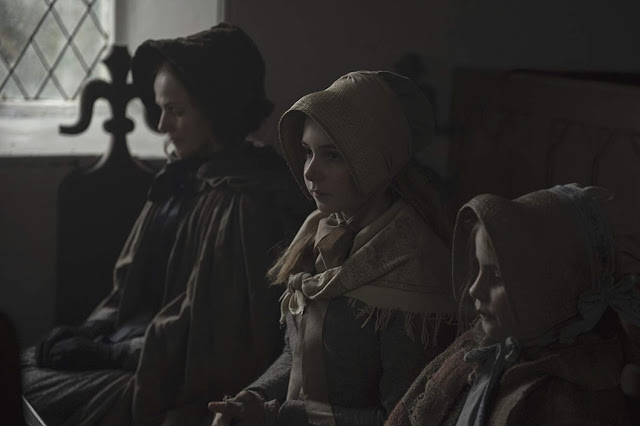 The sound presentation might actually be the sleeper agent of the movie; the quiet ambience and low-key score by James Edward Barker infests your brain and lays most of the groundwork for the film’s focus on despair and futility. Gwen is one of those flicks where the sun never shines, where the world is draped in rainy gray. The picture only ever fills with life a single time–when Gwen is at the doctor’s office begging him for medicine to take home to her mother—it’s the only time the film feels hopeful, and that things might be okay for the family.

If you want a good-time, party-like horror movie, run as fast as you can from Gwen, but if you’re someone who prefers to wallow in the dark, or if you’re especially into period dread, Gwen and her family are waiting for you. 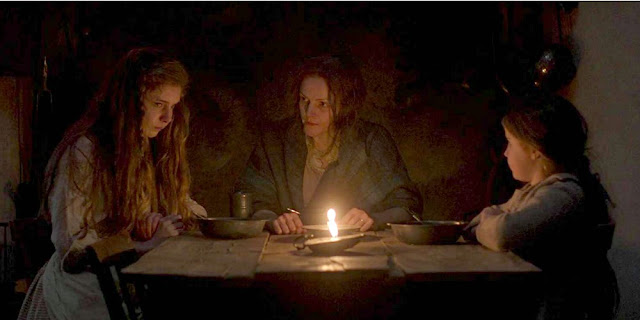 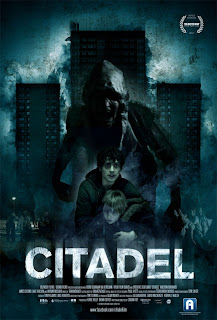 Overcoming one's fears is a huge and reoccurring theme in the horror genre. Whether directly or indirectly, our protagonists will only find victory if they learn to confront their tormentor head on, with eyes up. In A Nightmare on Elm Street for instance, Nancy literally vanquishes her demon by saying, "You're nothing." In Citadel, this theme is the forefront of our protagonist's conflict. Quite literally, he must overcome his fears...or die.

Tommy (Aneurin Barnard) and his wife, Joanne (Amy Shiels), are moving out of their apartment. With Joanne ready to give birth any day, it would seem the time has come to vacate and find a bigger or nicer place to raise their daughter. Out of nowhere, a faceless group of hoods attacks Joanne, beating her and stabbing her in the stomach with a syringe. She is rushed to the hospital where she falls into a coma, and her baby is surgically removed, luckily having survived. Tommy, because of his limited means, has no choice but to move into a ghetto duplex in the middle of a wasteland sporting signs promising a "regeneration project." The sign itself is so worn and faded that it's obvious this project is not happening any time soon - if at all. And so this complex remains tattered and torn, with eviscerated cars littering the parking lot.

In the wake of Joanne's attack, Tommy is left with a terrible case of agoraphobia. Leaving his house is tantamount to torture, and he can only do so after coaxing himself out with his eyes squeezed shut. Self-help groups don't seem to be helping at all, and he has no one in which to confide except for Marie (Wunmi Mosaku), a nurse at the hospice center where Joanne has been for nine comatose months. After Tommy euthanizes Joanne by releasing her from her life support, Marie tries to help Tommy regain control of his life. But soon, familiar faceless hoods make an appearance, intent on finishing what they started. They kidnap baby Elsa, and the multitudes of missing child fliers hanging all over town suggests that Elsa is just one of many taken by these mysterious figures. With the help of an eccentric priest (James Cosmo) and his blind adopted son, Danny (Jake Wilson), Tommy must enter his former high-rise tenement building where the hoods seem to live, take back his child, and put an end to their terror for good. 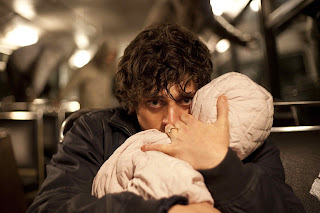 Somewhere between all the early buzz and positive reviews, and my having seen the film for myself, I saw the plot loosely described somewhere as a man being terrorized by a bunch of hooded youths. That instantly bummed me out. I wanted something creepy and unnatural. Ghosts or demons or freaks or something. I didn't want a bunch of annoying mall teens.

Still, I watched the film for myself, figuring it would be good for at least one scare or two, what with all the high marks it received during its film festival run.

I was pleasantly surprised. And creeped out. Turns out that plot description I saw elsewhere was wrong. The figures were hooded, yes, and they were definitely of a kid height...but that's about where our antagonists stop being kids. They are something much more dangerous and terrifying.

With film, but within the horror genre especially, you are asked to suspend your disbelief. But we're pretty willing to, so long as the film has earned it. Citadel asks you to refrain from asking hundreds of questions you probably should be, and which you'd be right to. Being as vague and non-spoilery as possible, those might be:

"How is it this priest knows what he knows and never told anyone?"

"How is it this building filled with these little monsters has sat for so long and no one has done anything about it, or even noticed?"

"How is it we readily accept Tommy not calling the police whenever he is terrorized because, according to him, 'they won't come here.' "

There are many more of these types of questions that might pop up as you watch, but all of them are rendered irrelevant for one simple reason: because the film is too well made and well acted to have to answer to these questions. Sometimes it's better not to explain everything to death. Sometimes it's better to just place your trust in the filmmakers that you're being told everything you need to know - no more, no less. 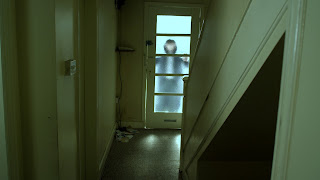 Strong performances by Bernard as Tommy and especially James Cosmo ("Game of Thrones," "Sons of Anarchy") as the unnamed priest propel the film forward, hurtling us through the moments where lesser actors would allow us to stop and question what it is we're seeing and noting why the vagueness of certainly details might be a weakness.

The script by Ciaran Foy is simple but clever, and at times feels even personal. And that's because it is. Foy himself suffered an unwarranted assault as a youth, perpetrated by a bunch of hooded miscreants who beat him and stabbed him in the throat with a syringe. It left Foy a shell-shocked, suffering agoraphobic who never found the strength to leave his home until he was accepted for film school.

Considering its budget, the make-up and visual effects are astounding. You can't really know how good of a job the the filmmakers did until you watch the behind the scenes featurette on the DVD, which is refreshingly informative, and not just your usual glad-handing and blanket congratulatory praise for every single person involved in the production.

There's an underlying warning about a society's and/or government's disregardance of lower income areas. We, as that society, sometimes like to pretend those areas don't exist and that they're not a problem. But the longer they sit and fester, the worse they will become. Their poverty will lead to desperation, which will lead to crime. Children will be born into this environment and grow in a household where crime is perfectly acceptable, and this wicked cycle will continue. One character describes the tenement building featured in the film as having been "abandoned" - not in the sense that only vagrants live there, and the place is otherwise in shambles, but that at one point whoever was living there was trying to make a life...and it was they who were actually abandoned.

Citadel is original, and surprisingly emotional. And to watch a man confront his fears, quite literally, has never been creepier.