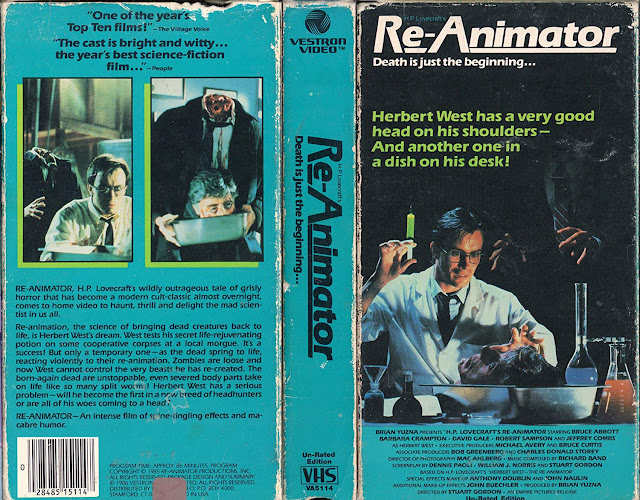 In a sort of sequel to my previous write-up for Tales from the Crypt Presents: Demon Knight, in which I launched back to my childhood to better explain my affinity for that particular title, I discovered Re-Animator on that same exact mid-’90s summer evening (when my unassuming extended family discovered the hard way that I was a weirdo into horror and gore and everything in between).

Once the closing credits on Demon Knight were rolling and my horrified family were filing out of the room, all while I rubbed my hands together and wondered when I might ever see such genius dummy heads again, my uncle flashed me a mischievous grin and asked, “So you like all that gory stuff, huh?”

“Yup!” I said, the only time in my life I’ve ever said “yup” because doing so makes you a douche bag.

He walked over to a shelf filled with VHS tapes and procured one. He slid it into the VCR, gave me a wink, and said, “Enjoy!”

Re-Animator then happened in front of me, and I've never been the same.

1985’s Re-Animator is silly chaos, but such an unmitigated joy to watch. An ’80s splatter-movie take on Frankenstein, it features two doctors, Herbert West (Jeffrey Combs) and Dan Cain (Bruce Abbott) experimenting with a serum that has the power to resurrect the dead. Along for the ride are Meg ('80s B scream queen Barbara Crampton), her father, Dean Halsey (Robert Sampson), and Dr. Carl Hill (David Gale), the human villain of the flick who intensely hates Dr. West for his arrogance and who also intensely desires Meg in the most basest of ways. Because the concept of creating an elixir to resurrect the dead has never gone wrong for anyone in the horror genre, Re-Animator does not feature people getting their heads ripped off, their bodies torn in half, or every other kind of crimson-spattered gore piece you can think of. Just kidding! One by one, our cast become unfortunately entrapped in the madcap adventures of West and Cain, each of them falling victim to the duo's dripping experiments...and some of them finding their way back to the land of the "living."

Let me tell you: when an eleven-year-old sees Re-Animator for the first time, it feels like magic. Dangerous, filthy magic. It feels like a snuff film or the kinds of films that linger behind the curtain in the local video store below the sign that reads ADULTS ONLY. It feels like you are watching something that you should not be watching. This is how it felt for me. Between all the wonderful violence and gore, which at that time had topped anything I’d ever seen, and the fact that I didn’t recognize a single actor in the film, giving it an additionally “underground” feeling, I basically felt that by watching Re-Animator I was breaking the law, and any minute the Mom Police would kick down the door and beat me with 37 wooden spoons. This unrelenting gore and cadre of unrecognizable actors re-enforced, in my eleven-year-old brain, one very scary notion: everything in Re-Animator had happened for real, and now everyone was dead. For real.

Being that Re-Animator was a trashy take on the Frankenstein story, it was only appropriate that the sequel follow one of the most famous sequels in film history: Bride of Frankenstein.

Following the bloody, brainy, bony, and heady events of “the Miskatonic Massacre,” Drs. Herbert West and Dan Cain are somehow free and clear of any wrongdoing and continuing both their practice as fledgling necromancers as well as their very odd friendship. Meanwhile, at Miskatonic Hospital, an evidence room is stuffed with the dismembered parts of all the resurrected dead who tore shit up during the massacre, and for reasons unexplained, will not decompose. (This is eight years later, by the way, which makes this extra weird.) There’s also a room containing a fair number of these resurrected dead whom the hospital don’t know what to do with, so they kind of wander around like free-range chickens. As you might suspect, those wacky doctors and their serums of life-givers create another series of conflicts that begin with drooling dead and crawling arms and end with a lot of blood on the walls.

The spirit of Re-Animator resides fully within Bride of Re-Animator, despite the script being very obviously rushed into production. Years before this sequel came to fruition, the original Re-Animator team tried to raise money for another very different kind of sequel. Called House of Re-Animator, this sequel would see Dr. West being called to the White House during the Reagan Administration to, assumedly, resurrect the deceased commander-in-chief, and would've also involved the resurrected Meg. (This script was rewritten in 2006, with the targeted undead "president" being updated to Vice President Dick Cheney, who by then, was obviously the one running the country.) Instead, the script was rewritten from the ground up, and the concept for Bride of Re-Animator was born.

Bride of Re-Animator hits a lot of the same beats as its predecessor, all while throwing in quite a handful of homages to series inspiration H.P. Lovecraft. (“It’s just rats in the walls,” Dr. West says at one point, along with the sewing of bat wings onto a decapitated head, which then flew around the room.) People and limbs still come to life. Female nudity is still firmly on display. But derivativeness aside, Bride of Re-Animator actually nails one aspect and gets a lot of mileage out of it, and it all comes from the title. It’s also the very last thing you’d expect from any Re-Animator film: love.

Every one of our characters are connected to each other because of this, but also happens to cause the most fucked up love triangle polygon of all time. Dr. Cain lets Dr. West talk him into their next challenge — the creation of life rather than just the resurrection of the dead — by convincing him to place his departed love Meg’s heart in the corpse of Cain's recently dead patient (Kathleen Kinmont, Halloween 4: The Return of Michael Myers). The detective hot on the doctor duo’s trail (played by Claude Earl Jones, Dark Night of the Scarecrow) is on a personal crusade to avenge his departed wife, who ended up as one of Dr. West’s experiments and currently inhabits the free-range chicken room. Meanwhile, there’s Francesca (the gorgeous Fabiana Udenio, who would go on to play Alotta Fagina in Austin Powers), a new love interest for Dr. Cain, and a source of consternation for Dr. West, who seems to want Dan all to himself. And then there’s the undead bride, who loves Dan because she’s got Meg’s heart, but yet West is in love with her because he created her.

Being a sequel, Bride of Re-Animator doesn't live up to the original, but weak script aside, I’ll be damned if it’s not trying at every turn. Directed by Re-Animator producer Brian Yuzna, Bride of Re-Animator feels every bit like a sequel, thematically and stylistically. The returning faces certainly help in that regard (and Bruce Abbott brings along a lot more hair), but the spirit of unrestrained, maniacal gore and mayhem are what make Bride of Re-Animator one of the better horror sequels birthed from an ’80s classic. I was a little hesitant in checking this one out after having seen it (and being disappointed by it) so many years ago, but after an iffy beginning, it easily found its groove. Every bit as gory, goofy, and ridiculous as Stuart Gordon’s beloved original, Bride of Re-Animator is a worthy entry in the Re-Animator series. 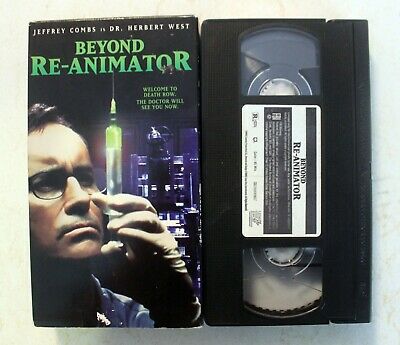 Beyond Re-Animator was shot in 2003 under the watchful eye of a returning Yuzna. Though there’s much to criticize about this final sequel, its biggest problem is when it was made: Beyond-Animator is a 2000s sequel to an '80s franchise, trying to exist in the same era as “smart” ironic slashers and PG-13 J-horror remakes. To me, lots of horror franchises birthed during the ‘80s belong to the ‘80s, and attempts to modernize some of them haven’t gone particularly well. (Tsk-tsking right at you, Friday the 13th 2009.) Of course, Beyond Re-Animator should be lauded for trying to launch a franchise comeback and offering some counter programming, but not only does it stick out for this reason, it also sticks out because it can’t afford what it clearly wants to be: unprecedented bodily madness.

Largely funded by Spanish film company Fantastic Factory/Filmax, Beyond Re-Animator was shot in Barcelona and Valencia, Spain, with roughly half a cast of Spanish actors, and right off the bat it makes things feel too different. Normally you might think, “Well, the whole movie takes place in a prison, so it’s not unbelievable that many of the prisoners are Spanish,” but that just makes you a racist. Still, this idea does make Beyond Re-Animator stick out and could have been remedied by acknowledging the obvious Spanish flavor and tweaking the script so that the infamous Herbert West had been hidden away overseas in an effort to continue hushing up his awful experiments at Miskatonic University.

Jeffrey Combs as Herbert West, the re-animator, doesn’t miss a single beat and easily steps back into the ghoul doctor’s shoes — it’s everyone else who don’t seem fully confident in their roles. And as previously mentioned, Beyond Re-Animator, given its more modern 2000s production, is the first entry to try its hand at visual effects. Nearly all of them are a failure, especially when it comes to the evil warden’s decapitated and re-animated…er…member. (Yes, this happens. If you ever wanted to see a dick puppet fight a rat puppet, you’ve reached your final destination.)

Beyond Re-Animator was clearly made in the same spirit of the original, and by film’s end, when chaos has totally overtaken the prison, it’s larger in scope than anything the previous films attempted, and that’s absolutely commendable. But unlike its predecessors, the comedy seems cheap--manufactured only to one-up the series’ previous shock moments, whereas the horror aspect this time around just feels corny. In Re-Animator, a headless corpse lowers its own decapitated head into the nether regions of a naked hapless female. That’s shocking, yes, but it’s also a unique gotcha moment that works as intended because it hadn’t been done before. In Beyond Re-Animator, someone’s dick gets ripped off and then later comes to life. Voilà: a killer wang. Sure, this, too, hasn't been done, but only because it's low hanging fruit of a joke, and that’s pretty much the example of Beyond Re-Animator trying too hard to be shocking: falling back on lazy dick jokes.

Personally, for me, the Re-Animator train stops here. There is a "remake" floating around out there in the world, but one which features zero personnel from the original trilogy, and which seems to have been made either because the writings of H.P. Lovecraft are now in the public domain, or because, like Creepshow 3 and Day of the Dead 2: Contagium (not a word), its rights-holders were cleaning out their filing cabinets and said, “Oh, shit, we own this?”

As for the future, it seems like a perfect climate to resurrect the long mooted House of Re-Animator for a third time. We already have a racist, misogynistic moron in the White House and roughly 30% of the country are okay with this. Imagine the fun that could be had with a resurrected Donald Trump bleeding from his mouth and eating brains on national television and his base finding ways to talk about how he’s still the greatest president in the history of the country. That script, alarmingly and sadly, writes itself.