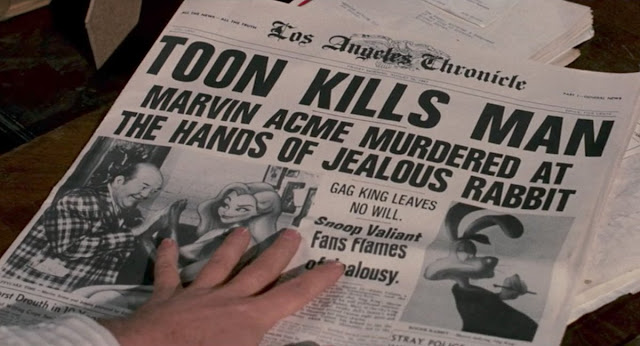 "Which scary movie moment freaked you out the most as a kid?"

Oh, give me a break. No contest. Judge Doom, as brought to manic life by Christopher Lloyd in Who Framed Roger Rabbit, is the stuff of kid nightmares. One of the all-time great movie villains, Judge Doom, in his all-black, Gestapo-like suit, is an eerie menace from his very first appearance in a 1947’s version of Los Angeles where “real” human beings coexist alongside walking cartoon characters. And he hates ‘toons. Vilifies them. Wants to dip them all in barrels of paint thinner (“the dip”) until nothing is left but colored grease. The evisceration and erasure of Toon Town. A full-on cartoon holocaust – that’s his endgame. That’s all bad enough.

And then the classic film’s lunatic finale happens.

Judge Doom is flattened under the wheels of a steamroller, only to resurrect, stick a gas tank nozzle into his mouth, and inflate his pancake body. His glass eyes pop out of his head to reveal he is, in fact, a ‘toon wearing a human façade. In pure, unfettered mania of which only Christopher Lloyd is capable, he embarks on a tirade in which he proudly, insanely, over-the-toply admits to Eddie Valiant (Bob Hoskins) that he was the one who killed Eddie’s brother – the crux of the movie’s conflict – and as his confession becomes more and more unhinged, his voice reaches a cartoonish high pitch like a whistling teapot before his cartoon eyes turn to daggers and springs burst from his feet, which he uses to launch across half a warehouse after a fleeing Eddie – and the whole time, his animated eyes are bubbling in his plastic face like a witch’s cauldron.

You know, for kids!

Watching Who Framed Roger Rabbit today, I’m still amazed director Robert Zemeckis was able to get away with the ghastly images that appear throughout the finale of his cleverly plotted Chinatown spoof. If the seed for horror hadn’t already been planted in my brain when I first saw it in my youth, then Who Framed Roger Rabbit was definitely one of the influences that cultivated it. (I also had an unhealthy crush on Jessica Rabbit, but that’s for another time.)