Jesse flipped through the records in the clearance rack at Second Spin, one of the many stores down on Main Street. He had recently gotten into older music, and further, collecting it on vinyl. There was something mysterious about vinyl records that Jesse found intriguing, precisely because the end of the record era pre-dated Jesse’s birth by thirty years, give or take. He spent much of his free time searching through the many vinyl crates in Second Spin. Every record he pulled out and examined was like a treasure—forgotten for years until he came along to discover it.

While on one of his routine searches, he pulled out a record that had an interesting design. Its entirely black cardboard folder was in pretty flawed condition, as if it had been in many homes over the years. There was no title on the front, and when he flipped it over, he saw the record contained only three songs:
1. Demon of Darkness
2. Invoke
3. Endings
Jesse was annoyed by the lack of information on the album, such as the record company that had produced it, or even the name of the band that had recorded it...but there was something about it that compelled him to bring it home. The vinyl at Second Spin was cheap, so he decided to take the risk and give it a try.

After getting home, Jesse nudged the front door open with his shoulder – a daily necessity – and made his way into the cluttered house he shared with his father. Jesse’s mom was no longer in the picture, and a true bachelor pad their household had become. If the pizza boxes sitting on the couch were only a week old, then they considered the place to be squeaky-clean.

He threw his backpack on the floor and ran up to his room with his newest acquisition. He slid the record out of the folder and held it up under the light. The entire record was black, and there was no label. He plopped the record on the spindle of his record player, dropped the needle in place, and impatiently waited. It began playing so he lay down on his bed, listening to the music slowly pouring through his crackling speakers.

Not bad, Jesse thought to himself as the first song ended and the next began. And it wasn’t. It didn’t bring the house down, but it wasn’t entirely incompetent like some of the other stuff he’d brought home before. And each song sounded pretty different from the one previous.

It was good. Not great.

Jesse had the feeling he had bought yet another record that would end up in his trade-in box—a hazard of being a collector. He sat up in bed to retrieve the record from the player when the last track began—the one called ‘Endings.’

Jesse had never heard anything like it, and he sat very still, as if moving even an inch would interrupt this strange feeling that had come over him. Then, very slowly, as the song continued to play, Jesse stood up, went over to his desk, and opened the drawer. He rifled through the drawer until he found what he was looking for. He leaned his head back and drew the scissors’ blade over the taut flesh of his throat. Blood dribbled immediately down the front of his shirt, and the flesh of his neck tore open with ease, widening quickly in a muddy, red smile. Jesse even made it as far as slicing another gash through his throat before he fell back onto the floor, blood gushing out of his wounds with such intensity that it splattered the ceiling above. As Jesse lost consciousness, and as the final song faded to a close, his own blood dripped down on him from the ceiling, splotching him and the floor around him with crimson dots.

Shelly excitedly tore the wrapping paper from her newest gift as her grandparents looked on. Her gift had an odd shape: big and square, but very thin, like a giant cracker. She had no idea what it could have been. She ripped off the last of the paper and held her gift in her hand. And she still had no idea what it was.

Her grandfather chuckled. “Now that you’ve seen the gift, it’s time for a history lesson,” he said.

“We didn’t have CDs in my day—back when horses pulled carts and we communicated by tapping rocks together,” he said, his eyes twinkling. “We listened to these—they’re called records.”

“Well, how do I listen to it?” Shelly asked. She took the record out of the folder and held it up. “It looks like a tire,” she said.

“They’re not all that different from the CDs you listen to these days,” said Shelly’s grandmother. “They were just bigger, that’s all.”

“So I gotta spend money to use one of my own birthday gifts?” Shelly asked. “That’s stupid!”

“Who said you had to spend money?” her grandfather said, bending down and lifting a turntable – decorated with a single colorful bow – onto the table.

Shelly looked at it, utterly confused. “How does it work?”

Her grandfather chuckled and took the album from her, laying it carefully down on the player and placing the needle at the record’s very edge. The music began to play out of the modestly sized speakers that were hooked into the back of the player.

“I guess...” she said, her disappointment in the gift more than obvious.

“Well, it won’t hurt you to experience a little culture,” he said, upset by his granddaughter’s attitude. He slid out his chair with a screech and stood up to make his way into the kitchen. “I’m getting some more coffee.”

“Did I make him mad?” Shelly asked her grandmother, frowning.

“No, of course not, honey,” her grandmother lied. “He just gets frustrated sometimes because things are so different now than they used to be.”

Shelly lowered her chin to the tabletop so her eyes were level with the needle’s point. The second song had ended and the third was just beginning.

“What band is this?” Shelly asked.

“We don’t know, actually,” her grandmother answered. We found the player in a pawn shop and this was the only record the man had.”

“Why did you buy it if you didn’t know who the band was?” Shelly asked, confused.

“Well, your real gift was the player, sweetie. Not the record. We both saw it one day and thought you would really get a ki—” The words droned to a halt in the old woman’s mouth and she began staring off in the distance, as if immediately stuck in a trance.

Shelly’s grandmother turned her head and stared at her granddaughter for a moment before picking up the empty cake dish in front of her and smashing it into several sharp pieces, one of which she then drove into the young girl’s right eye. Shelly shrieked in pain, but her cries were cut short by another slash with the shard, this time across her temple. The gash left behind was deep. The C-shaped flap of skin hung down over her ear, revealing a patch of her light-brown-colored skull, which was barely visible through the thin membrane surrounding it. Her blood flowed like a river, and soon she became limp in her grandmother’s arms. Shelley’s grandmother dropped her small body fall to the ground with a hard, sickening thud before walking into the kitchen. Her husband was in the process of rushing out to see what had happened when he stopped in his tracks, seeing the blood on his wife’s white sweater and the blank look on her face.

She didn’t respond, but instead pushed him roughly back against the kitchen pantry door and grabbed the large cake knife from the empty platter on the kitchen table, which she stabbed with great force into his throat. The blade easily plunged through the man’s skin, muscles, and bone before splintering the wooden cabinet behind him. She let go of the knife, which easily supported the weight of her husband, and held his face in her hands. A single tear fell from his left eye as his last breath left his body. She left the kitchen and walked into the bathroom where she turned on the bathtub faucet at full blast. She lowered herself into the tub until she was flat on her back. She then waited patiently for the water in the tub to rise—to invade her body and take her away.

And in the dining room where the family had convened to share the joy of Shelly’s tenth birthday, the last track on the album ended, and the needle fell into the last groove – the gutter – emitting nothing but static...letting any listeners know that there was nothing more to come.

Kirby walked in, wearing his tacky, punk-rock jacket, smiled a suspicious smile, and tossed the record at Sarah.

“Oomph,” she said, catching the record without trying to spill the coffee that was on the desk next to her computer. “Thanks for that,” she said finally.

Kirby smiled again and sat down next to her, kissing her once on the cheek. “Got you a present.”

Sarah held up the album and looked at it questioningly.

“Song list is on the back,” he told her.

Sarah flipped over the album and read off some of the titles. “What band?” she asked.

“Where’d you get it?” Sarah asked, taking the record out of the folder. She turned it around in her hands to search for a label and found none.

“You wouldn’t believe me if I told you,” he said, grinning devilishly.

“I’ll believe anything you tell me because you’re crazy enough to do anything,” Sarah replied.

“My brother came across it at work and gave it to me...” Kirby said, coyly looking down at the desk, along which he absent-mindedly dragged his finger.

“No way, really?” Sarah asked, looking at the album again, as if its lineage would now be more obvious. “Won’t he get in trouble for that?”

“Nah, are you kidding? That’s been sitting in the evidence room for years and years. No one’s going to notice it’s missing.” He grinned again. “So...are you going to play it?”

“I can’t play it if I don’t even know who recorded the thing,” Sarah said, pretending to dismiss the record altogether.

Kirby flashed Sarah the smile that made her fall in love in the first place.

Kirby laughed. He bent over her desk for a quick kiss. “I’ll see you tonight.”

Sarah watched Kirby walk out the door before turning her attention back to her computer screen. After another hour’s worth of typing, she printed her work and then walked out of her office with the mystery album tucked under her arm. She nodded hello to the radio DJ as he made his way out of the studio after having finished his set. She slipped through the door, took her seat, and lifted the headphones onto her face after the commercial break was through. She slid Kirby’s record into one of the station’s many players and prepped it for broadcast.

“I have a special gift for you, boys and girls,” Sarah said into the college station’s bright red microphone. “A mysterious record hit my desk tonight. I know nothing about it—not even the band that recorded it. Three songs total...and here they come.” She dropped the needle slowly in place to play the album. As the record began spinning, she leaned into the microphone one more time.

“Let’s hope this brings the house down.” 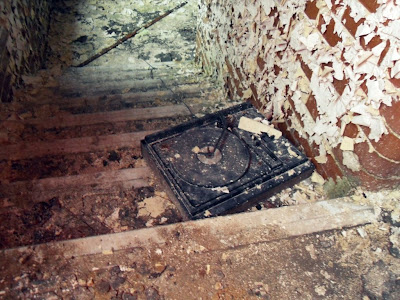