The rock ‘n’ roll horror film has somehow become a sub-genre over the years.

Say that phrase and people have their favorites: Rock ‘N’ Roll Nightmare, Hard Rock Zombies, the original Trick or Treat. Rock and horror became somewhat synonymous following the popularity boom of acts like Black Sabbath, Alice Cooper, and Kiss, among many others. Their black and dour and chain-ridden iconography and focus on dark lyrics and subject matter made them kindred spirits, so it was only a matter of time before they began to blur the lines and appear in each other’s worlds. Eventually, Alice Cooper was writing songs for Jason Voorhees.

Almost all of these titles weren’t just broadly painted with the horror brush — the films were generally satanic or demonic in nature. Appropriate, being that rock ‘n’ roll was, for a long time, the devil’s music (according to our grandmothers).

The Devil’s Candy is the next step, but also damn refreshing, taking the well-worn trope of “the devil made me do it” and doing something unique with it. Jesse (Ethan Embry) and his daughter  love metal — Metallica, Slayer, and all the rest — but otherwise the film presents them as normal and fully functioning — no hint of a troubled past, no signs of self-harm, depression, etc. 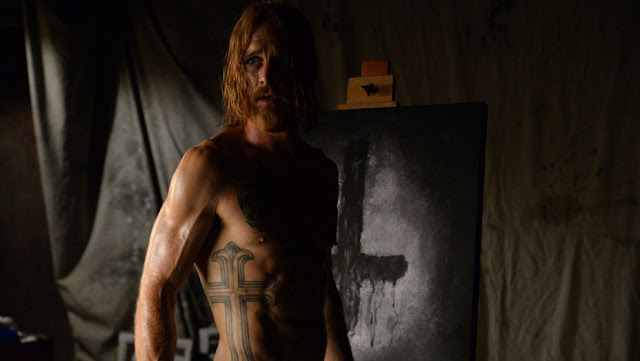 I doubt it’s spoiler material if I say the devil never appears on screen in physical form, nor does anyone become possessed by the devil or any of his minions. And I’m certainly not saying this idea is bad (I tell anyone who will listen about the awesomeness of Let Us Prey, starring Game of Thrones’ Liam Cunningham [Davos] as Beezlebub), but it’s always welcome and appreciative when someone takes a well traveled concept and does something new with it.

Ethan Embry has become a friend to the horror genre over the years, appearing in one of the best Masters of Horror episodes, “Incident On and Off a Mountain Road” (directed by Don Coscarelli), as well as the recent werewolf-at-the-old-folks home flick Late Phases. But if you’re in my demographic, then you remember Embry from one film alone: Can’t Hardly Wait, arguably the Fast Times at Ridgemont High of my generation. Remembering him from that goofball comedy, but seeing him in The Devil’s Candy, makes the actor much more likable in the role, and we, the audience, feel for him when he begins to lose control of his life and fall victim to the dark voices inside his head. The actor is barely recognizable with his Brad Pitt hair and his Bloodsport-era Van Damme body (seriously, I’m a functioning heterosexual and even I was in awe), but his kind and soulful eyes shine through, and every second of pain he experiences is felt by the viewer.

The film is strikingly directed as well, offering a handful of extremely suspenseful, shocking, creepy, and disturbing sequences (not all at once, of course), and this more than includes the excellent finale.
Though The Devil’s Candy runs at a scant 72 minutes, its story never feels incomplete or in need of additional content. It’s not a typical running time for the genre, but there’s nothing wrong with that either. When the film ends, you’ll swear it had only been on for 20 minutes. That’s less to do with running time and more to do with how easily it sucks you in.