THE HANDS RESIST HIM

In March of 2000, the below painting, officially titled "The Hands Resist Him," was sold on eBay with the description "The Haunted Painting." 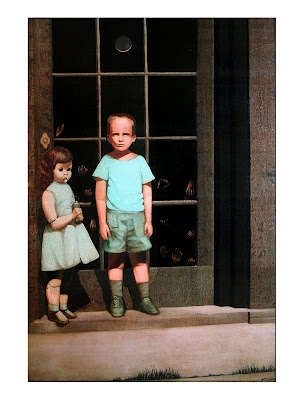 The original auction description (edited for clarity) is below:

When we received this painting, we thought it was really good art.  A "picker" had found it abandoned behind an old brewery. At the time we wondered a little why a seemingly perfectly fine painting would be discarded like that. (Today we don't !!! ) One morning, our four-and-a-half-year-old daughter claimed that the children in the picture were fighting and coming into the room during the night. Now, I don't believe in UFOs, or Elvis being alive, but my husband was alarmed. To my amusement, he set up a motion-triggered camera. After three nights, there were pictures. The last two pictures shown are from that 'stakeout'.

[Wikipedia also states: "Included with the listing were a series of photographs that were said to be evidence of an incident in which the female doll character threatened the male character with a gun that she was holding, causing him to attempt to leave the painting."]


Please judge for yourself. Before you do, please read the following warning and disclaimer.

WARNING:
Do not bid on this painting if you are susceptible to stress-related disease, faint of heart, or are unfamiliar with supernatural events. By bidding on this painting, you agree to release the owners of all liability in relation to the sale or any events happening after the sale that might be [attributed] to this painting. This painting may or may not possess supernatural powers that could impact or change your life. However, by bidding, you agree to exclusively bid on the value of the artwork, with disregard to the last two photos featured in this auction, and hold the owners harmless in regards to them and their impact - expressed, or implied.

Now that we got this out of the way, one question to you eBayers: we want our house to be blessed after the painting is gone; does anybody know who is qualified to do that?

The size of the painting is 24 by 36 inches, so it is rather large. As I have had several questions, here the following answers.
I encourage you to bid on the artwork, and consider the last two photographs as pure entertainment; please do not take them into consideration when bidding.

As we think it is a good idea to bless any house, we still welcome input into that procedure. 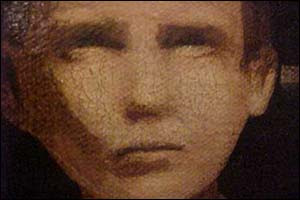 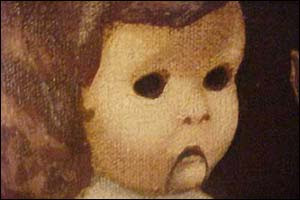 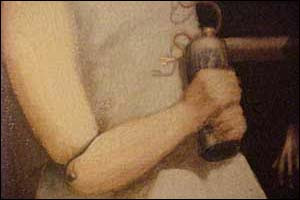 After the posting of the auction, which attracted thousands of visitors, many people who saw the painting began to experience strange auditory/aural hallucinations and bouts of hypochondria...or genuine hauntings:

The painting's artist, Bill Stoneham, explains the inspiration and origin of the painting:

"When I painted the Hands Resist Him in 1972, I used an old photo of myself at age five in a Chicago apartment. The hands are the 'other lives.' The glass door, that thin veil between waking and dreaming. The girl/doll is the imagined companion, or guide through this realm.

Both the owner of the Gallery where 'Hands' was displayed and the Los Angeles Times art critic who reviewed my show were dead within a year of the show.

I'm sure it was coincidence, but some of what I paint resonates in other people, opening the inner door, or basement. By the way, I still have no idea what happened to the character actor who bought the painting at the show (editor note: it was John Marley*, who died in 1984), or how it ended up abandoned in a building, though I could speculate."

* The unfortunate movie producer from The Godfather who denied Johnny Fontane a part in his movie and got a horse head in his bed for his troubles.

Prints of "The Hands Resist Him" are available on Bill's official site.