THE POSSESSION OF HANNAH GRACE (2018) 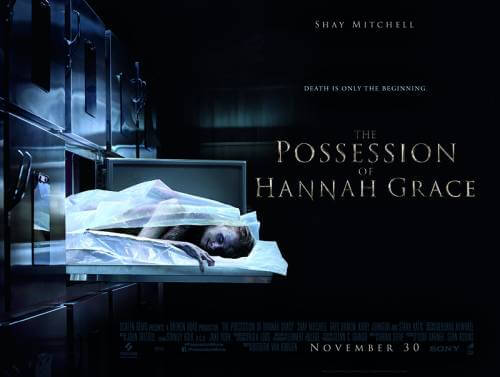 The Possession of Hannah Grace is founded on an admittedly clever concept: what would happen to the body of a person who had died during an exorcism if the ritual hadn’t been completed? Well, naturally, it would become the morgue attendant’s problem, and there’s nothing creepier than the idea of being haunted by a possessed dead body in a basement morgue. Although I’ve always professed that I have no problem if plots are borrowed from previous movies so long as the one doing the borrowing does so with good intentions, it’s hard to ignore the fact that The Possession of Hannah Grace exists beneath the behemoth shadow of 2016’s The Autopsy of Jane Doe. Not only do both ride on the same plot — a cursed body causing supernatural havoc in an isolated setting — but The Autopsy of Jane Doe did it so well without relying on corny visual effects or borrowing creepy set pieces from other flicks. (The Possession of Hannah Grace borrows from everyone, naming The Exorcist, A Nightmare on Elm Street, and The Ring as just a few.) The Autopsy of Jane Doe was gory, of course, but it felt classically done, anyway – a horror movie made by adults for adults. The Possession of Hannah Grace, despite the few good intentions it has, was clearly made for teens, and while I won’t issue a blanket statement condemning all teen-targeted flicks, let’s just say that when it comes to the horror genre, the odds are hardly ever in their favor. The Possession of Hannah Grace only wiggles a single dead finger in rebellion to that assembly line, teen-horror mindset, twitching to life every so often in an otherwise ho-hum horror offering that’s DOA. 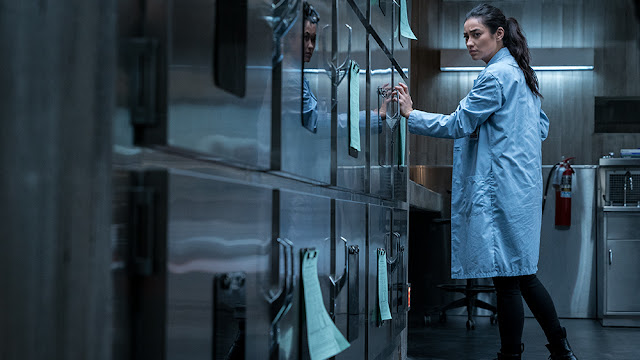 To its credit, what with this being a Screen Gems release (purveyors of the Resident Evil and Underworld franchises), The Possession of Hannah Grace never gets too stupid in trying to scare its audience. Yes, there are lots of jump scares, and the reliance on CGI for even the most everyday things seems unnecessary, but there’s at least an intent for scares leaning on pure genre tradition. Also like The Autopsy of Jane Doe, The Possession of Hannah Grace blends supernatural shock with gory images, earning its R rating with repeated usage of the titular character’s twisted, wounded, burned corpse. (Several characters meet grisly ends as well.) In spite of its strong points, the movie falls victim to the usual kinds of lowest common denominators that plague mainstream horror releases, including a lead character (played by Shay Mitchell) whose magazine-cover beauty laughs in the face of her being a former police officer and a current morgue attendant. I’ve also never seen a more attractive and trendy looking city morgue, ever—the neo-gothic, art deco-inspired set looks more appropriate for Jack Napier’s penthouse in Tim Burton’s Batman than it does for an actual place where, at some point, a brain has definitely fallen onto the floor.

The Possession of Hannah Grace is a movie. That sounds like “no shit” level evaluation, but that is its biggest problem. It’s not good enough to warrant revisitation or critical praise, and not bad enough to leave behind a distinct impression. The movie, ultimately, is just there. (If you haven’t, see The Autopsy of Jane Doe instead.)