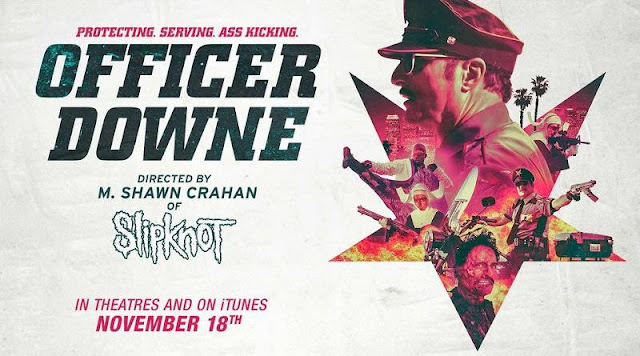 If we can thank the bloated 2007 double-feature film Grindhouse for anything, it would be the impending encouragement to filmmakers who appreciate the obscure, pulpy, over-the-top features from the 1960s and ‘70s that allowed its filmmakers to side-step more traditional story presentation. Together, though it wasn’t a total success, Quentin Tarantino and Robert Rodriguez unashamedly cobbled together a well-meaning grindhouse theater experience, complete with a host of trailers for fake films weaved in between. One of these, Hobo with a Shotgun, would later become a feature film starring Rutger Haur in the titular role. And from those loins it would seem that Office Downe, though based on a graphic novel of the same name, would emerge.

In a sort of mishmash of Robocop, Batman, and perhaps Bill Lustig’s Maniac Cop trilogy (coming soon as a series from producer Nicolas Winding Refn and Universal Soldier sequels director John Hyams), Officer Downe takes all the primary colors, unrelenting violence and insanity, and sense-assaulting presentation of Hobo with a Shotgun and implants it into a more (kind of) accessible story (and I use that term loosely, and in comparison with its cinematic roots). Designed with a Gotham City/Arkham Asylum mentality, the very proactive Officer Terry Downe works his way up the crime ladder of Los Angeles, encountering one strange group of bad guys, led by one strange semi-lead villain, after another, until he reaches a mastermind with whom he eventually meets his match. The villains are straight out of comic books, complete with garish wardrobes, operatic presentations, and a metric ton of dastardliness. Which is appropriate for all kinds of reasons.

The main reason to see Officer Downe is for its outlandishness, as well as Sons of Anarchy's Kim Coates having a grand time hamming it up, bad-ass style. Much like other grindhouse films both new and old, the gimmick is what draws in its audience. Very few grindhouse flicks felt the need to engage its audience with any kind of social message, though if you wanted to look hard enough I suppose you might find one every so often (mostly in the Blaxsploitation movement). It’s not that Officer Downe is about nothing, but it’s much more about spectacle than it is about substance. In real life, our relationship with the police has never been shakier, and seeing an undead(?), immortal(?) cop systematically resurrected from the dead to continue his very violent assault against the criminal underbelly of Los Angeles neither assuages nor solidifies our real fears of the police. The closest Officer Downe gets to a message is that we need cops like Terry Downe to do the things that we know need to be done, even if we have to play God in order to do it. But, when your “hero” spends much of his screen time blowing the heads off villainous nuns or mutilating a squadron of enemy ninjas, it would probably be wise to check your brain at the door and enjoy Officer Downe for what it is, rather than what you think it should be.

Fans of Grindhouse, Hobo with a Shotgun, Sin City, and other heightened silliness should have a reasonably good time with Officer Downe. Very low on substance but high on spectacle, violence, flying limbs, nudity, outlandishness (animal-masked villains, intentionally poorly dubbed villains, all the practical and CGI blood you can stand), Officer Downe never professes to be anything more than what it presents in its trailer: hard-bitten carnage courtesy of a beloved supporting actor enjoying a rare lead role and relishing in every moment. Casual film fans should look elsewhere, but those who seek the offbeat and the depraved should, at the very least, enjoy the ride, even if it’s a one-way trip.