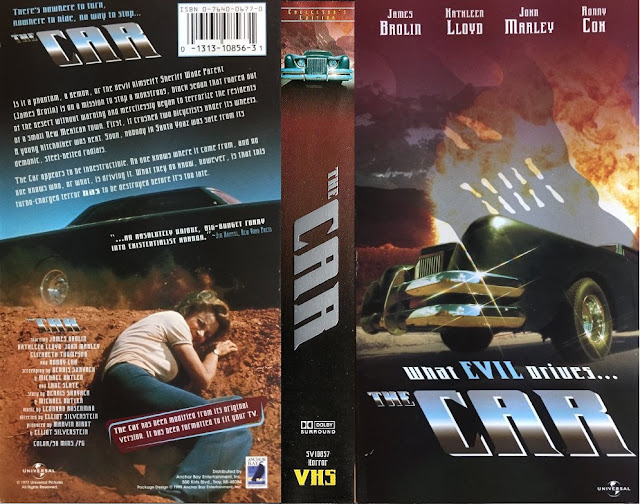 It sounds a little funny to call The Car, about a black you-know-what terrorizing citizens within a dusty, barren, sandy landscape, a rip-off of JAWS, but...that's exactly what it is. Adding to the irony, in that everything about The Car is as opposite to JAWS as you can get, is that Spielberg's previous film to JAWS was Duel, about an ominous black truck terrorizing one particular unfortunate man across a dusty, barren, sandy landscape. Much in the same way the shark of JAWS cruised the waters of Amity Island, the black demonized Lincoln of The Car cruises the sandy roads of a Santa Fe-ish town - both relentlessly looking for victims, both of a scope never before seen, and both announcing their presences with a fin and a horn, respectively. And meanwhile, two sheriffs dealing with their own shortcomings (a fear of the water and a desire to live up to a law-enforcement father) find themselves contending with the monstrous force that's come to plague their homes.

But where JAWS was a high concept, philosophical audience favorite, The Car is just dumb, lacking emotion, philosophy, or anything toward which other films wishing to make more than a visceral impact strive.

There's an undeniable enjoyment that derives from watching The Car. That it never reveals who or what it is behind the wheel adds to that enjoyment, leaving that bit of mystery to embolden the idea that whatever's driving the car is something unnatural and evil. And once the film achieves its highest Blues Brothers level of absurdity by having the titular force impossibly roll, sideways, over the two patrol cruisers pursuing it, clearly destroying itself in the process only to touch back down on the ground without a mark in the paint or some soot on the previously blazing grill, well, by now you're either fully on board with The Car or not.

The Car is dumb but absolutely entertaining. A breezy 90 mins filled with car-nage (get it?), half-baked ideas, and moments of nonsense even sillier than the nonsense surrounding it (how's a car drive itself into a garage and then lock itself in?), it's a clever-enough spin on the killer-car sub-genre and an unlikely but wholly watchable JAWS rip-off. Though The Car's originality is running low on gas, it's an offbeat title you shouldn't put in your rear-view, and other metaphors about cars.

(P.S. A very, very belated sequel was recently released direct-to-video called The Car: Road to Revenge. It's one of the worst things you could ever see, but it's hilariously incompetent.)