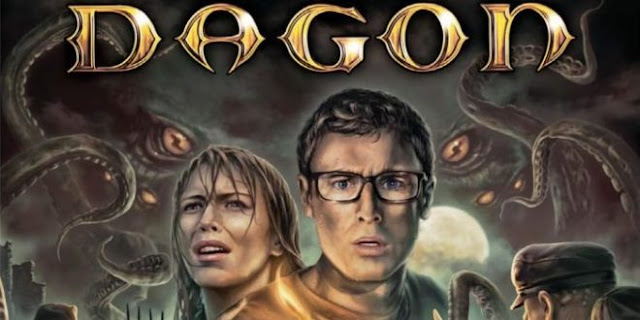 I’ve never been a huge fan of director Stuart Gordon outside of the original Re-Animator, but I respect any director who willfully works in the horror genre. Along with Re-Animator, Gordon has steadily directed several adaptions of horror author H.P. Lovecraft’s icky tales, including From Beyond, Castlefreak, Dreams in the Witch House, and finally, Dagon. Though his efforts vary in both loyalty and quality (again, I love Re-Animator, but it shares very little in common with the original story), his dedication to doing Lovecraft right is admirable.

Back during its initial 2001 release, about which I only knew because of its coverage in Fangoria Magazine, I gave Dagon a fair shot but determined it was another in a long line of overhyped under-the-radar horror releases that fanboys wold heap praise upon simply because it wasn’t “mainstream.” All these years later, I’m not prepared to say that the hype was worth it, and oh what a fool I’ve been, but I will say it plays a lot better for me now than it did back then. 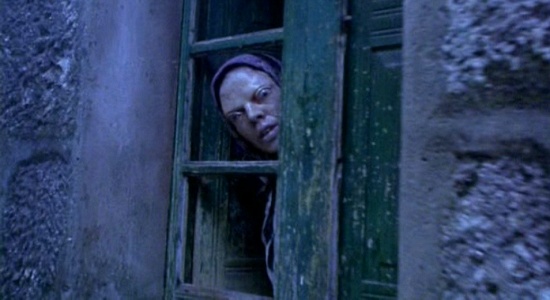 For much of its running time, Dagon sidesteps gore and violence in favor of otherworldliness and a definite creep factor. Gordon has never tried to be “scary” like he does in Dagon; the director’s most well-known works are celebrated more for their shock value and violent gore gags. But as our lead hero, Paul Marsh, stumbles through the rain-drenched Spanish town of Imboca looking for his missing wife, and as the mysterious, mutated town citizens stumble in the background toward him in the midst of undergoing their strange transformation, the realization that this is actually pretty creepy begins to sink in. Don’t get me wrong, by film’s end, faces will be carved entirely off their skulls and worn, Leatherface-style, by the fishy members of the town, but until that point, Gordon chooses to walk a classy path of strange eeriness.

This being a low-budget, early 2000s production, whichever visual effects Dagon attempts look very poor. Thankfully there are only a handful of moments that call for these kinds of set-pieces that would be physically bigger than the production could afford, and even more thankfully, the film’s reliance mostly on practical effects all look great and very imaginative.

In general, Dagon isn’t a slam dunk as a horror experience, but it’s certainly one of the strongest titles in Gordon’s filmography and also one of the more solid Lovecraft adaptations out there.