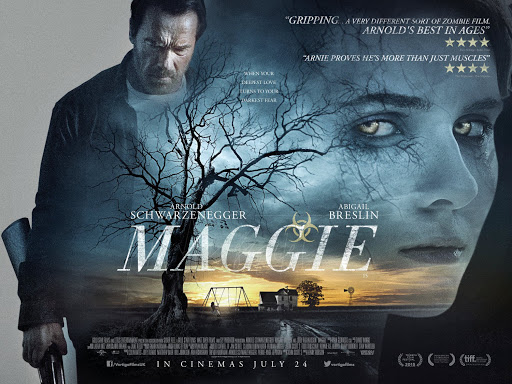 Maggie is a remarkable film in many respects, the most remarkable being that it was, for a long time, the little movie that could, and not one that many people took seriously. With several new Arnold films not doing all that well with audiences (in terms of box office), the announcement of him signing on to a zombie film alongside Abigail Breslin, who had already done a zombie film (and a comedy at that), didn't bode well, as right off the bat, it wasn't a project anyone was taking seriously. Talkback sections on the film's announcement were littered with the typical disdain for the actor's legacy and age; quotes from his previous films were appropriated and zombified. "Put the zombie down!" etc. The internet did not miss the chance to be the total cliche that it is.

And then Maggie began making film festival rounds to mostly positive reviews, and even those reviewers who panned the film at least had the decency to rightly herald Arnold's performance. For a long time, Arnold has been less of an actor and more of a superstar celebrity. And that's okay. He's only contributed some of the most entertaining action films on Planet Earth, so in that regard, not everyone need be Daniel Day Lewis. His mysterious "Austrian" accent and subsequent inability to fully articulate through it has relegated him to taking on roles where his subdued and slightly unusual way of speaking didn't inhibit the type of role he was playing, like, say, cyborg, or barbarian, or kindergarten teacher. 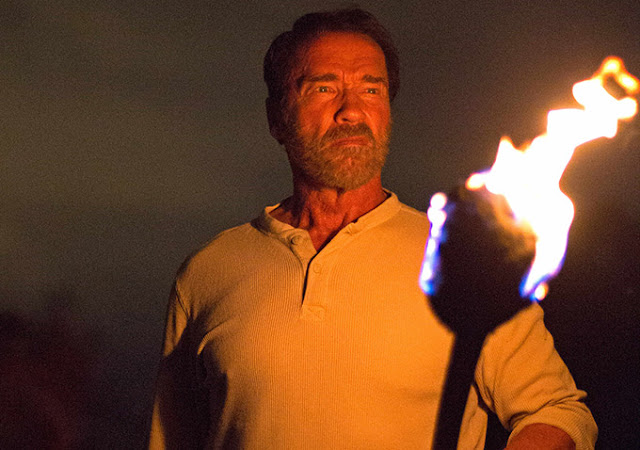 It's entirely possible that Maggie director Henry Hobson cast Arnold for somewhat the same reason - choosing someone who once represented the immortal screen superstar to this time play it small, sad, and even helpless. Without being able to rely on muscles or guns or groan-inducing puns, Arnold, this time, has only his performance to contribute. Finally, after all these years, the Austrian Oak has proven that he does have the chops to commit to such a role, relying only his talent without any of his familiar crutches in sight.

Maggie doesn't fully work and its ending may leave the viewer a little unsatisfied, but for the majority of the running time, what does work fully overcomes its weaknesses. Much like George Romero has been doing for fifty years, Maggie uses its zombies as a metaphor, but this time confines it to the family unit - more specifically, to the pain of losing a child to terminal illness. It's about witnessing the slow transformation from living to dying, and feeling completely helpless to stop it. To call the film powerful might be overstepping a bit, but at times it can be deeply affecting, with a roundhouse of excellent performances (including the film's best, which belongs to Bryce Romero [no relation!] as the doomed semi-love interest, Trent) and strengthened by restrained storytelling, Maggie offers the most unique film of Arnold's career as well as one of the most rewarding and unassuming gems of the year. 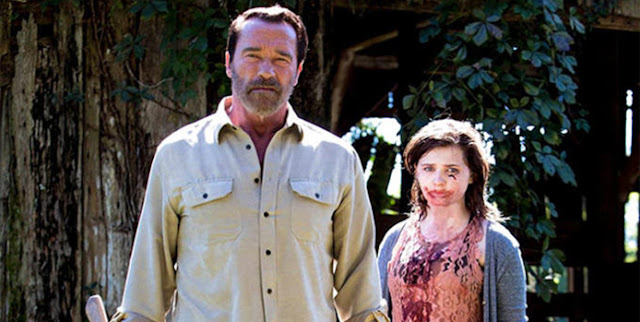 Hobson designed Maggie's visual presentation with muted and pale colors, as if every piece of surrounding is void of life. Details are finely captured, including Arnold's weathered and craggy face. Background textures of the family's depressed and depressing farmhouse, which contribute to much of the established mood, are also ably captured - they don't so much "pop" as they just exist, in keeping with Maggie's restrained style. From the squeaking and rattling of Wade's truck to the ambiance of burning fields to David Wingo's melancholy score, Maggie's audioscape remains as intimate but present as the film itself. Dialogue is clean and well-presented. Environmental ambiance has been perfectly subdued, wiping away the sounds of birds and other native wildlife, adding to the overall feeling of death that drapes across the entire world. Only the desolate sounds of cicadas remain.

Strip away all your preconceived notions of just what kind of film Maggie is based solely on the fact that Arnold's face appears on the cover. Not only is Maggie purposely pensive (fans of the quicker-paced The Walking Dead should keep walking), it also plays things 100% serious, perhaps at times to its detriment, but it's still one of the best and underseen films of which Arnold has been a part for a long time. One hopes that Maggie's excellent video release introduce the film to a whole new audience that may have missed it the first time, leading them to embrace the new approach by one of cinema's favorite leading men, perhaps that will result in Arnold taking on more serious films and avoiding studio nonsense like Terminator: Genisys - and that's a possibility we should all take very seriously.