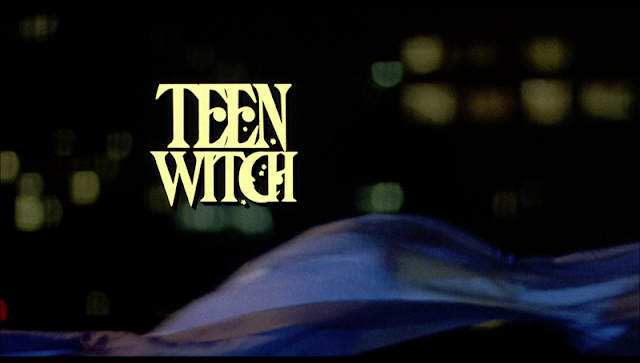 During my virginal viewing of Teen Witch, it was inevitable that my mind be blown. As someone who adores cinematic misfires – films being the equivalent of “ideas that seemed good at the time” – the triumphant Teen Witch offered much entertainment.

The plot – so ludicrous.

The random dance and rap sequences – so inexplicably present.

All of Teen Witch plays like a dream. At no point does it feel like it takes place in a real reality, and even for a movie reality it seems to be making it up as it goes. 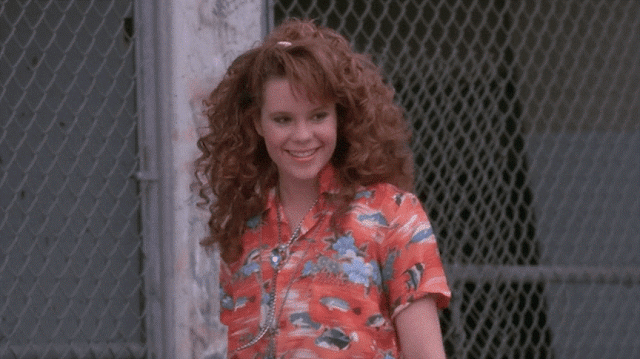 Is it a musical?

Then why do people randomly break into song and, apparently, use musical interludes to solve conflicts using the hip-hop masterpiece “Top That”? (Speaking of, what’s particularly amazing about the “Top That” rap sequence is that it’s not one of those musical moments where the entire cast break into song. Rather, a handful of teenage boys are just out in the street randomly rapping and dancing with each other, and our femmes encounter this with a detectible look of apprehension. It’s kind of amazing — especially when the girl in the bucket hat gets magic courage and starts frontin’ Greaser Ryan Reynolds, who seems offended that she’s not steppin’ off.)

Is it a comedy?

Why yes, sometimes it is.

But how do you separate the intentional from the unintentional? Sure, it’s funny when Louise uses witchcraft to make her least favorite teacher take off his clothes during class in a Rated-PG manner, but is it supposed to be funny when during a pivotal emotional moment where Louise decides she doesn’t need witchcraft to fall in love that right behind her there’s an extra who looks like a demonic Jerry Seinfeld wearing a hideous sweater and dancing in the most awkward way possible while staring right at her?

Is it a dramatic, Hughes-ish, coming-of-age that real teens can relate to?

“Be happy with your non-witch form” is the lesson learned, so…maybe?

Teen Witch is very ‘80s, and it’s interesting to see how much has changed in teen culture and the films that depict it, along with how much has been retained. Once Louise transitions from ugly duckling to beautiful swan, wearing Lauper-type ensembles comprised of bright colors and tutus, she becomes adorable. But the pre-witch version of Louise, in her frumpy clothes, her gigantic coats, her bulky sweaters, was still obviously adorable anyway. No amount of flat hair or awkward behavior was going to camouflage that. And that’s still a popular trope that’s been parodied in recent years – the beautiful girl that no one could see was beautiful because she wore glasses. However, amusingly, what the ‘80s depicted as the nerd – thick glasses, sweater vests, pompadours – is the version of today’s hipster and can be found in every catalog for Old Navy. See below: 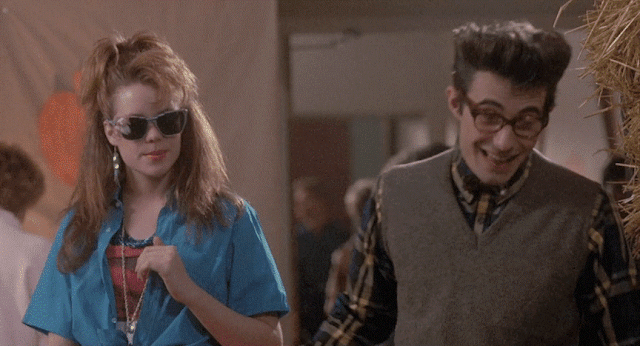 Repeating my recent loss of innocence as it pertains to Teen Witch, I understand that I am treading on sacred ground. The catalyst for Teen Witch ending up on my reviewer radar was the announcement of the title on the Blu-ray format and the subsequent outrageous amount of enthusiasm for its release and the adoration of this title. Post-viewing, as I was walking around in a daze and inquiring if any colleagues had managed to get the license plate number off the bus that ran me down – aka, seen Teen Witch – I received a handful of disparate responses. One among them: “Um…TOP THAT is my favorite song!”

How do you argue with that? I mean, listen to that soundtrack! Quick, pick your poison. What’s your favorite. “High School Blues”? “I Like Boys”? Perhaps “What Are You Doing About Love”? Spoiler: they’re all stupid! But I’ll be damned if they don’t add to Teen Witch‘s enjoyment.

Nostalgia is powerful. It can result in everything from fond memories to sheer denial. If I had grown up with Teen Witch in the same way many others did, perhaps my response to it would be different. And maybe these people recognize Teen Witch as cheesy, silly, irreverent, and somewhat poorly made at times (in one scene I swear Zelda Rubinstein is reading her lines off cue cards like Christopher Walken during an SNL skit), but it’s also admittedly perfectly harmless and certainly worthy of your embrace. And anyone who knows me knows that I’ve embraced much worse for far less. One thing is for certain: while watching Teen Witch, I was never bored, never not entertained, and I’ll probably never forget it.