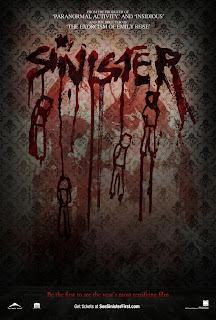 When Sinister was announced as far back as May of 2011, I began keeping an eye on any developments almost immediately because of the director attached to the project: Scott Derrickson. While he’s not a household name, at that point he had already given us the extremely undervalued The Exorcism of Emily Rose and the unfairly maligned Hellraiser: Inferno (my personal favorite entry in the Hellraiser franchise, even though it was never meant to be a Pinhead movie, anyway). I don’t really blame him for the completely inept remake of The Day the Earth Stood Still, being that it was a Fox Studio movie, and as many know, they are a studio that can’t keep their grubby mitts off their larger, tent pole films.

Developments on Sinister began rolling in, using the terms “found footage” and “true crime.” Being that I’m a found footage nut ball, this sounded only but good to me. Then Ethan Hawke was announced for the project, and I was completely confused.

“Why are they casting such a big name celebrity for a found footage movie?,” etc.

Now that I’ve seen the film, and know how the found footage is incorporated, it all makes perfect sense. 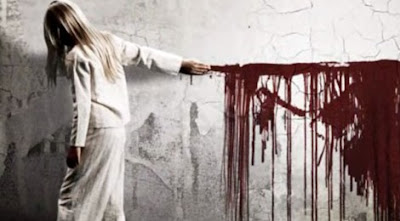 Ethan Hawke plays true-crime writer Ellison Oswald, who rose to prominence and fame with his book Kentucky Murder, written ten years prior to the events of Sinister. His prominence and exposure came when his book made known the fact that law enforcement had dropped the ball in a number of places while investigating during whatever murderous crimes that took place (they’re kept purposely vague), and Ellison’s book brought to light a lot of information that had been left behind. This is all well and good, and resulted in a bestselling book and a tidy little sum of money for the author and his family. However, there’s a blemish on Ellison’s career called Cold Denver Morning, another true-crime tome that unfortunately got some things wrong and allowed a murderer to walk free of his crimes.

Ellison moves his family, unbeknownst to them, into a Pennsylvania house where the previous family had been hung from a tree in the back yard. He hopes to investigate the unsolved murders and write the book of his career –  one that will erase all his past indiscretions and award him with all the fame and fortune he claims not to desire.

After discovering a box of super 8 films marked “home movies” up in the attic, Ellison begins going through them one by one, and what he sees before him are mere moments of idealized familial happiness and togetherness before the films jump cut and see those very same families being killed in some gruesome or intricate way. They aren’t just shot or stabbed – they’re tied to lounge chairs and pulled one by one into a swimming pool, or they're bound and gagged and pushed into a car filled with full cans of gasoline, only to burn alive. What’s important to note is this murderous footage features not only the family who had previously lived in Ellison’s new house, but other families from other houses from all across the country – and all involving one member of the family, a child, going missing soon after. The footage is genuinely unnerving, made all the more so by the very unorthodox musical choices of such avant garde/ambient musical groups like Accurst and Ulver, while Christopher Young, goddamn legend that he is, scores the more traditionally shot portions of the film.

Though Ellison tries as best as he can to isolate his family from his creepy discoveries, his son's previously conquered night terrors begin happening again with much more intensity, and his daughter begins to draw on her bedroom wall images featured in his ghastly filmstrips.

As Ellison investigates each murder, he begins to slowly realize that he’s not just dealing with terrible murders, but something much more than that…something beyond that boundary he never thought he would cross…something supernatural. 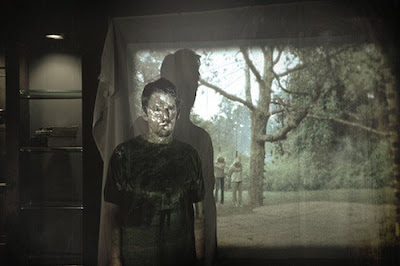 Blumhouse Productions, who produced Sinister, is quickly becoming a best friend to the horror community, having produced the Paranormal Activity trilogy (make that quadrilogy), Insidious, and the television series "The River." Blumhouse et al. and director Derrickson (along with first-time writer C. Robert Cargill, who knocked this out of the park for his first time out) work well together, and all seem to be on the very same page in terms of realizing this project and bringing it to the forefront. Sinister plays out very much like a kindred spirit to Insidious, with a heavy focus on quiet horror mixed with legitimately creepy imagery, non-melodic music, even down to a monstrous face appearing in every filmstrip Ellison watches.  It contains the perfect balance of quiet terror, disturbing images, and comic relief (which we end up relying on to take a breather from the mounting terror that befalls Ellison every night when the antiquated projector in his locked-up office kicks on by itself…)

What works in Sinister’s favor is that it’s a very simple and very contained story. There are only six people featured prominently in the movie (alive, anyway) and the action hardly ever leaves the Oswald family’s new home. And as for the story being simple, that’s not a slight against the film. Some of our best horror films – Halloween, Psycho – had simple stories, and because Sinister's filmmakers didn’t feel bogged down with having to provide exposition, this allowed them to create sequences to unnerve the audience.

It goes without saying that Sinister is Derrickon's best effort as a director. Watching the film gives you a feeling he's achieved a new way of approaching his material, and it's one that also feels the most unrestrained. It feels as if he was given nearly carte blanche to make this film the way he intended without a studio looking over his shoulder.

Horror needs more movies like Sinister. It needs high-concept and original ideas that are only out to scare audiences in the purest ways – with images, mood, music, and good story telling. I can only hope that Sinister sees success at the box office when it opens in a wider release on October 12th – not so it can be sequalized, but so once again, like Insidious and the PA films before it, studios can see that low-budgeted original horror fare can and will be successful, so long as you give it a chance.