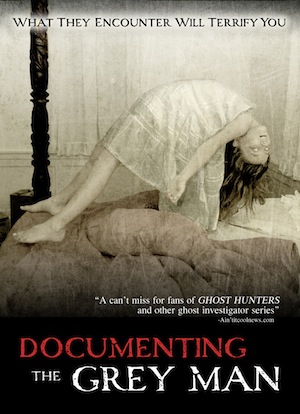 Warning: Spoilery content contained throughout.
Many filmmakers will tell you that they are just as satisfied with their film having a negative reception as they are a positive one, their reasoning being that their film in some way challenged their audience and triggered an emotional response. For some filmmakers, I’m sure that’s true, and for others, it’s probably a curtain to hide behind when celluloid shit hits the critical fan.
The only thing Documenting the Grey Man triggered in me was an overwhelming desire to turn off the thing and try to salvage the rest of my hour (because the movie is an hour long).
The movie opens with our eventual ghost-hunting crew sitting down at some kind of low-rent fast food place as the “leader” lays it all out on the table. He wants to “investigate” a Pawley’s Island home, in which the family claims to be experiencing a haunting, possibly by the Grey Man, a well known South Carolina legend. He explains he basically wants to fake everything and record everything, because, ya know, I guess it's easier to immediately establish a reason why he's a dick, and why our film crew don't drop their cameras and run the hell home upon seeing the first instance of creep.
The crew soon meets the family, including the little girl who seems to interact with the ghost (of course, since that’s become a common staple in the genre). Each family member is interviewed, and they each provide firsthand accounts of their so-called haunting. Sounds, things being moved, etc. Oh crap, the girl’s possessed. Everyone dies. Cut to black.
Thanks?
I was initially drawn to DTGM because of the found footage format it utilizes. Found footage movies are my weakness. I will always be tempted to sit down with one, no matter the concept, the budget, or the production company. Added to that, DTGM is based on a “true” story: that of the Grey Man, a mothman-like mysterious phantom who haunts the beach of Pawley’s island.
According to Wiki:

A local legend on the island has grown about the Gray Man. Thought to be the original owner of the Pelican Inn, the Gray Man is a friendly ghost who warns of impending hurricanes and protects the resident's houses from the storm. Serious hurricanes have struck in 1724, twice in 1752, 1822, 1911, 1954, and 1989. As recounted in an episode of the TV series Unsolved Mysteries, several different witnesses reported that they had seen the Gray Man shortly before Hurricane Hugo.

So, okay. That’s enough to capture my interest, as most ghost stories lean more toward the sensational and the dangerous. You often don’t hear stories of ghosts trying to be courteous and maternal.
Too bad DTGM had no idea what to do with this concept, as it eventually devolves into yet another film in which a camera crew runs around a house being pursued by an evil entity, intent on killing them all for no discernible reason whatsoever. 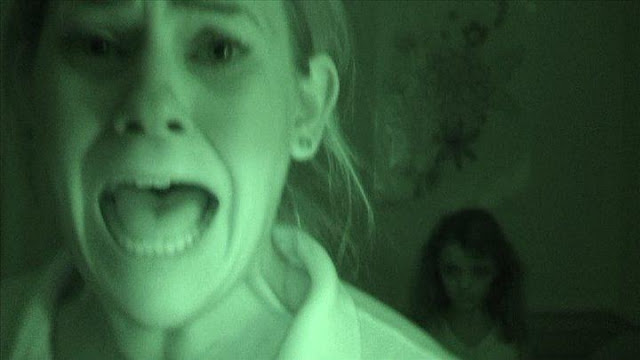 The performances are tepid pretty much across the board. Not a one of them feels at all natural or genuine, and each time a character speaks, you can’t help but realize that you’re not experiencing something even in the least bit real, but a really crappy direct-to-video movie. This becomes painfully evident once the in-movie documentary begins, and Pawley’s Island natives are interviewed. It’s almost astounding how unnatural and forced each interviewee appears, being that all they have to do, literally, is speak. There’s no need for a performance, because it’s just…talking. And they can't even do that. (The very first interviewee just may be the worst offender, going out of his way to sound as stereotypically "black" as possible, falling back on a “dammmmm!”, and even managing to shoe-horn in a bad joke about the business with the ghost being “white people’s” problems.)

In preparation for DTGM, writer/director Wayne Capps (who also plays the film’s fake psychic, and who gives a grating, overbearing performance) intensely studied other found footage stalwarts like The Blair Witch Project and Paranormal Activity and promptly threw out everything that worked about those movies, crafting a film in which people randomly wander around a house and then die by an invisible blow to the head.
Seriously.
Not a one death in DTGM is the least bit compelling or interesting. The entire cast literally just falls down, one at a time, with bloody foreheads, complemented with a muffled “splat” sound added in post so viewers are able to understand what the hell just happened.
Hey, I have a question: Why base your film on a real legend, using said legend to set up your concept, and then abandon everything about that real legend just to do your own thing? That’s like saying, “I’m making a movie about Bigfoot,” but then instead make a movie in which Bigfoot walks around with a knife and stabs babysitters in Haddonfield. Couldn’t the in-movie filmmakers have unearthed anything at all – a single piece of evidence – to imply that perhaps the Grey Man isn’t as helpful as his legend dictates; that his existence isn’t as romantic as Pawley’s Island wants to believe? Couldn’t the film have unearthed some kind of revelation to explain why everything previously known about the Grey Man was terribly incorrect? After all, they had an otherwise unused half-hour to play with. But I guess they were too excited to get to the game-changing money shot in which the entire cast throw their heads back and fall down.
When the credits rolled I stared at my television, and then after a while, I said, “Why bother?”
And that’s the real question here: why bother making DTGM? Nothing was gleaned, nothing new was introduced, at no point was it remotely creepy, and the legend on which it was based was completely dismissed after the first ten minutes.
Actually, after having written this review, I may have been wrong. I guess the film triggered an emotional response in me after all: total irritation.
Posted by TEOS at 10:59 AM