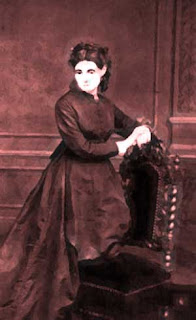 Marie Delphine LaLaurie (d. 1842), more commonly known as Madame LaLaurie, was a Louisiana-born socialite, known for her involvement in the torture of black slaves.
Jeanne deLavigne, writing in Ghost Stories of Old New Orleans (1946), alleged that LaLaurie had a "sadistic appetite [that] seemed never appeased until she had inflicted on one or more of her black servitors some hideous form of torture" and claimed that those who responded to [an] 1834 fire had found "male slaves, stark naked, chained to the wall, their eyes gouged out, their fingernails pulled off by the roots; others had their joints skinned and festering, great holes in their buttocks where the flesh had been sliced away, their ears hanging by shreds, their lips sewn together ... Intestines were pulled out and knotted around naked waists. There were holes in skulls, where a rough stick had been inserted to stir the brains."
The story was further popularized and embellished in Journey Into Darkness: Ghosts and Vampires of New Orleans (1998) by Kalila Katherina Smith, the operator of a New Orleans ghost tour business. Smith's book added several more explicit details to the discoveries allegedly made by rescuers during the 1834 fire, including a "victim [who] obviously had her arms amputated and her skin peeled off in a circular pattern, making her look like a human caterpillar," and another who had had her limbs broken and reset "at odd angles so she resembled a human crab."