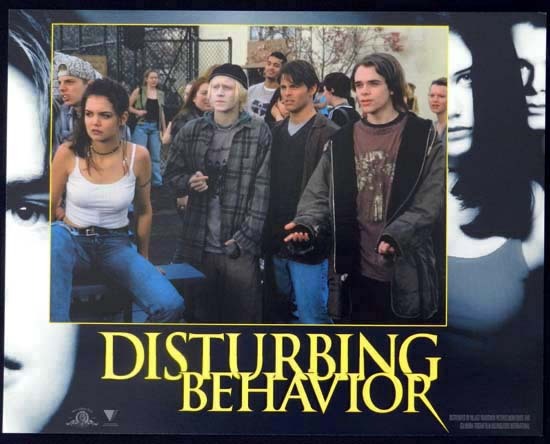 By 1998, screenwriter Kevin Williamson was dominating both television and cinemas with his teen-centric cry baby drama Dawson's Creek as well as his screenplays for Scream, I Know What You Did Last Summer, Scream 2, and The Faculty. MGM, it seemed, was eager to get into the Williamson business, but instead of just flat-out soliciting him, they instead hired someone to mimic his style: teens in a perilous conflict inspired by a classic horror film, all while uttering overly complicated and abstract dialogue that doesn't sound at all realistic. Scream had sent up Halloween, The Faculty modernized Invasion of the Body Snatchers (or Puppetmasters if you want to be all Clea DuVall about it), so Disturbing Behavior became tasked with revisiting The Stepford Wives with a hint of Pleasantville thrown in for good measure.

The script by Scott Rosenberg (Things to Do in Denver When You're Dead), who's been accused for pretty much his entire career of ripping off Tarantino's overly pompous writing, actually does an admirable job of mimicking Williamson's penchant for self-congratulatory dialogue indicative of imperiled teens thumbing through their worn-out thesauruses in between monster attacks. This dialogue tends to range from the unnecessarily flowery ("Don't worry about the snakes in your garden when you've got spiders in your bed.") to the downright befuddling ("Fail to be a tumor, Gavin!" "Sounds razor!"), but it never sounds at all casual. Along with this Williamson essence, the casting of Katie Holmes, still part of the then-current Dawson's Creek phenomenon, certainly didn't hurt in the "It's Kevin Williamson, we swear!" department. 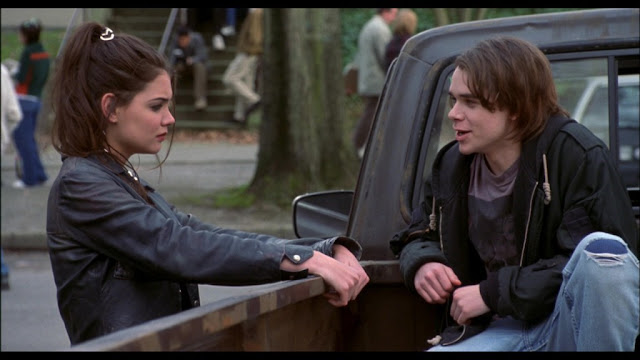 Director David Nutter, who directed the best episodes of The X-Files and Millennium (including its excellent pilot) as well as Game of Thrones, gets credit for taking on an outlandish concept and injecting all the life he can into it, but the end result isn't something of which to be particularly proud. (Behind-the-scenes drama between himself and the studio apparently resulted in a whopping 27 minutes being removed from his preferred cut, which didn't help matters.)

An allegory about sexual repression and the social pressures of "fitting in," Disturbing Behavior, alternate title Kids Are Dicks: The Movie, works less as a film on its own but more as a '90s time capsule for both filmmaking and teen culture. Because Disturbing Behavior was released within the tidal wave of younger-skewing horror/thrillers started by 1996's Scream, it followed the same template, right down to the sampling of inoffensive alternative rock songs used for thirty seconds at a time, every 3-4 mins, just so kids could have trendy musical accompaniment while walking to math class. (Props goes to Shout! Factory for opting not to specifically identify "Got You Where I Want You" by The Fly's on their Blu-ray's subtitle track during the film's opening, instead using the wonderful descriptor "[cheesy rock]".) 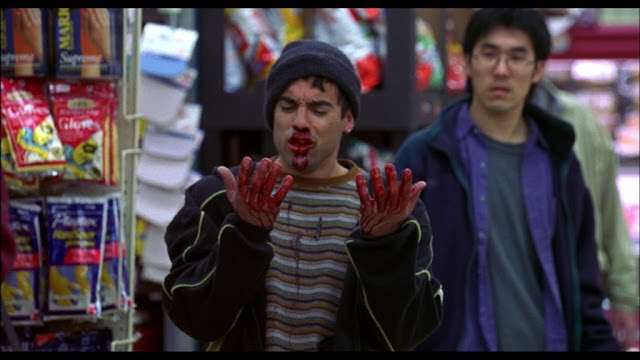 But it's the second part of this "time capsule" outlook that's the most interesting, which comes from viewing a 1998 film about teen culture with modern eyes, being how much teen culture has changed. Nick Stahl's Gavin does the obligatory introduction of the various social groups at Cradle Bay High School—the jocks, the nerds, etc.—only now, those once-nerds being "bottom feeders" whose "music of choice is the sound of their 'Apple PCs' booting up" are now an entire generation of hipsters who have embraced their lord and master Apple, and whose childhoods spent reading comic books and staying out of the sun are now resulting in billion dollar film production companies, whose profits come not just from those nerds, but from everyone.

These days, comic books are cool! Wearing dorky glasses are cool! The lone nerds have now become the majority.

In 1998, having an Apple computer made you a geek. Now, it makes you a chic American. 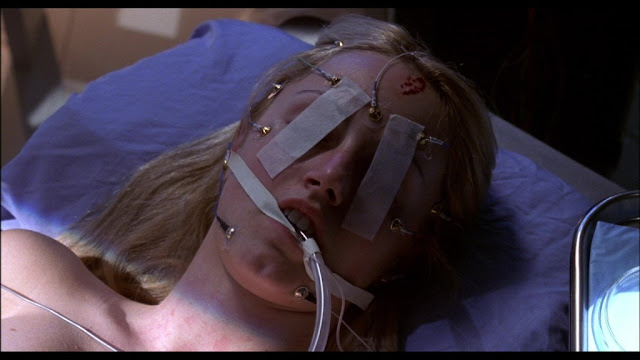 That's about where Disturbing Behavior stops being interesting. Not helping are its pallid characters, who are the cinematic equivalent of a flatlining heart monitor. (Some attempts at characterization appear in the deleted scenes, which is the kind of stuff studios love to cut out.) However, in the final film, we're really only given empty archetypes—some of which don't make any sense. The impulsively punchable James Marsden plays a drab empty leather jacket named Steve, who's bitter because his parents never want to talk about his dead brother, as he feels that would help them heal. Later, at school, when officials want to talk with him about his dead brother in an effort to help him heal, Steve says, "No thanks, I'm okay." And when it comes to Katie Holmes' Rachel, she's prone to dancing like no one is looking—right in the back of a pick-up truck, and to no music whatsoever. She's "trash." Also, Gavin's a stoner, and his albino friend (named U.V.—get it?) is basically braindead. 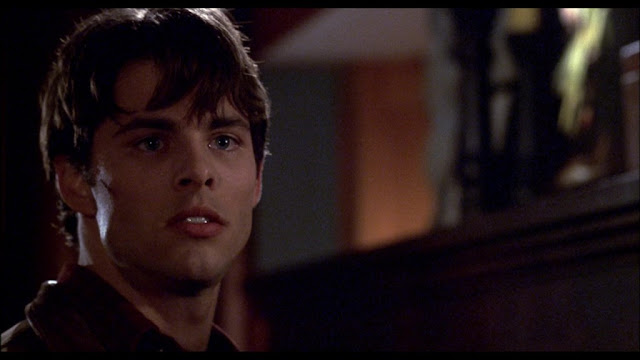 Not a total loss, Disturbing Behavior is worth a watch for a few reasons:

One: to see if you can count every single connection to The X-Files, whether it be the cast or the crew. (Spoiler: You will never find them all). The major ones are the presence of director David Nutter, composer Mark Snow, and 26(!) actors, among them Steve Railsback, who played Duane Barry, and Chris Owens, who played Agent Jeffrey Spender. Teen People called Disturbing Behavior "Part X-Files chiller, part Scream thriller!" and they weren't wrong.

Two: a very young Katharine Isabelle, who has been working loyally in the horror genre ever since, most recently in NBC's Hannibal. She's also gotten a lot better, as she's actually so bad here it makes her work in Freddy vs. Jason seem Streep caliber, and that's saying something, because everyone is terrible in Freddy vs. Jason.

Three: William Sadler playing his most eccentric character yet. 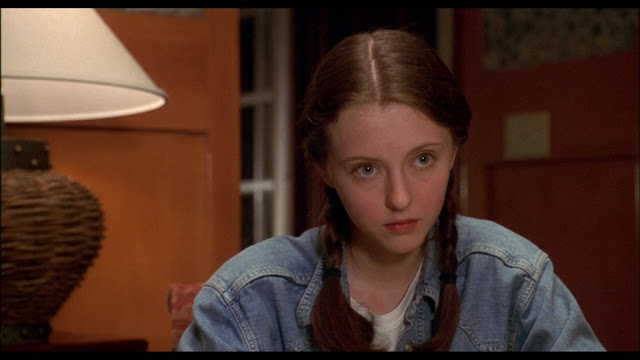