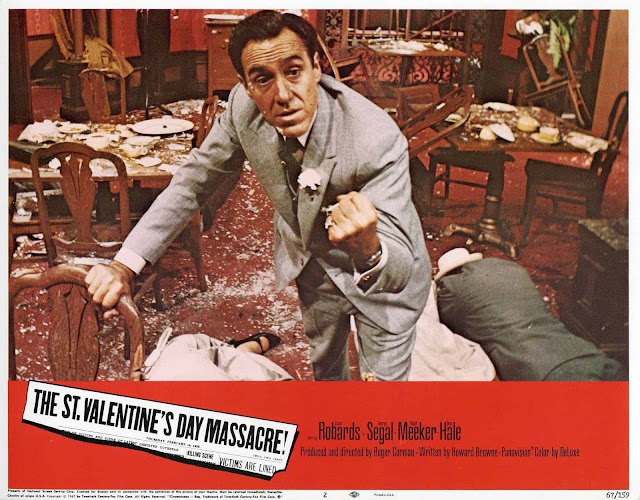 The name Roger Corman carries a lot of weight in both mainstream Hollywood as well as cult audiences. The man responsible for enabling the careers of no less than Martin Scorsese, Ron Howard, Joe Dante, and so many more, has also produced some of the silliest, trashiest, z-grade horror and exploitation trash this side of 42nd Street. Silly as it might sound, but the man who currently has CobraGator and Sharktopous vs. Mermantula on his producing roster is also the same man who, without hyperbole, permanently changed the face of the industry by not only breaking new ground when it came to low budget filmmaking, but who also birthed upon the world some of our greatest living filmmakers. Though Corman has also stepped behind the camera for no less than 56 directorial projects, when you compare that to the one thousand films he's produced, it seems like a drop in the bucket. His directing "phase" transcends four decades, his last credit belonging to the glorious trainwreck Frankenstein Unbound, but it often seems that Corman's body of work that receives the most attention revolves around his Edgar Allan Poe collaborations with Vincent Price as well as his self-described "drugs and sex pictures" like The Trip.

And that's what makes The St. Valentine's Day Massacre so special. Made during a time when studios were no longer making classic-era gangster pictures (the only other one that comes to mind is the Warren Oates starring Dillinger), and boasting involvement from the likes of legends Jason Robards, George Segal, and frequent muse Bruce Dern, the pedigree of The St. Valentine's Day Massacre suggests a rather subtle project for the director to take on - at least, on its surface. Because while it's easy to deduce that since it doesn't feature Dennis Hopper or Peter Fonda dropping acid and hallucinating or a man being slowly sliced in half by a swinging pendulum blade that it's possible that Corman was looking to make a "prestige" picture, so much of The St. Valentine's Day Massacre is hugely ingrained with his DNA - and I don't just mean the violence. Though he was working for his first major studio, and though his production was considered low budget, he was given the most amount of money yet to bring his project to fruition. His ability to stretch a dollar to its very limits is something that seems to be making a return to genre film-making, and he successfully increases the scope and look of his film with little effort. Much of Corman's budget went toward building impressive exterior Chicago sets, complete with storefront barber shops, general stores, and bars, and actors were willing to work for less in order to play a different kind of role. 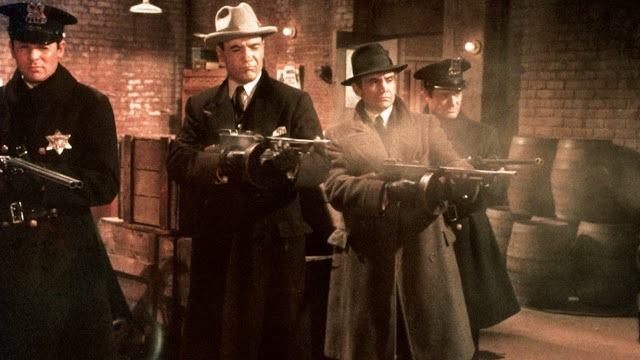 The St. Valentine's Day Massacre, presented in a semi-documentary style approach, is actually quite factually accurate (if you're willing to forgive the gaunt Robards playing the quite rotund Al Capone, that is), which is one of the film's best attributes. It's 1929 in Chicago. The sounds of gunfire ring out, causing pedestrians to shrink back behind doorways. Everyone looks alarmed, but no one looks very surprised. This is what life in Depression-era Chicago has become. Attempting to rule the city are Alphonse Capone, Southside Mob boss, and George "Bugs" Moran, who is eager to muscle in on Capone's illegal booze importing, using threats and intimidation to force speakeasy operators into buying their supply from him instead, and at twice the amount. Tactics like this are causing a problem: namely adding to the tensions already firmly established between the rival gangs. It soon escalates to all-out war, with drive-by shootings spraying thousands of bullets, and the gangs cherry-picking each other's men one by one.

The first thing worth commending about The St. Valentine's Day Massacre is how calmly presented it all is. Corman adds nothing superfluous or gimmicky to keep your attention on screen (except, of course, for that rather silly domestic dispute involving thrown lamps and a scantily clad Jean Hale). Much like modern takes on the gangster genre including The Sopranos, The St. Valentine's Day Massacre is driven by dialogue, character exchange, and the performances of the actors engaging in them. You can add as many tommygun-grasping, suit-wearing mafioso to the poster as you'd like, but the film refreshingly doesn't rely on warring gangs whacking each other out. This would be considered praise for any filmmaker, but it's heightened praise considering it's Roger Corman's accomplishment, a man who more often than not eyed the line in the sand with a glint in his eye and wry smile as he took towering steps over it. Sure, men are gunned down, as this kind of story demands it, but the violence is surprisingly sporadic, so when it does occur, it actually results in being that much more jarring. However, the problem is at times this decision can cause the film to seem drawn out or tedious. Audiences will be anticipating what the title promises, and Corman is right to make them wait for it, but a brisker pace would have resulted in a more rewarding experience. Still, The St. Valentine's Day Massacre packs quite a punch despite that, offering up an array of dedicated performances from the likes of Robards, George Segal, and Ralph Meeker. (Look for the blink-and-miss-it cameo from Jack Nicholson.) 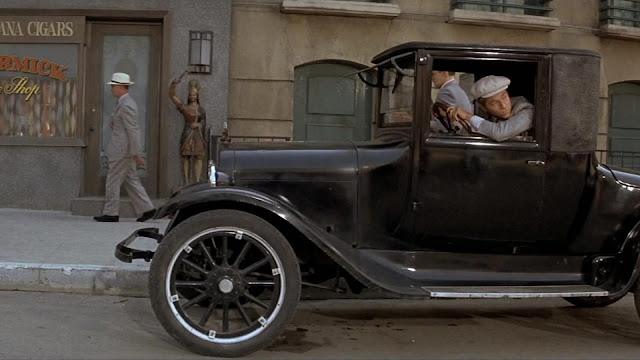 Speaking of performances, Jason Robards resurrects an unhinged, megalomaniacal Al Capone, chewing every stick of scenery and making damn sure the back row can more than hear him. It will more than rival Robert De Niro's take on Alphonse in Brian De Palma's The Untouchables twenty-five years later.

The gangster era is a huge part of American history, and as such, the gangster picture is a huge part of American cinema. United Artists produced probably the quintessential take with Scarface, but Warner Bros.' frequent collaborations with James Cagney and Edward G. Robinson solidified them as the studio producing the gangster picture. Though the movement had run its course by the end of the 1930s, the mystique that they held for the American public never really waned. Corman's contribution to this genre with The St. Valentine's Day Massacre remains one of the director's most celebrated films - accessible to all cinematically inclined members of the public. With nothing outrageous or overly exploitative to isolate lesser adventurous audiences, Corman's rare foray into the mainstream was a successful one. Fifty years later, whether The St. Valentine's Day Massacre is considered a cult title or perhaps a minor classic, there's no mistaking that Corman's passion for the story and his admirable ability to work within the confines of a low budget have resulted in a film that, at the very least, is still worth discussing all these years later.