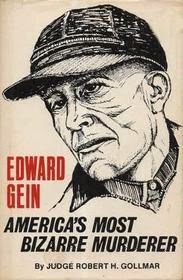 As I’ve said before, there’s been no better friend to the horror genre than Edward Gein. Perhaps you’ve heard of him? He killed two women (that we know of), dug up the graves of a dozen more, and kept parts of them in his home for various purposes. Which parts? I’ll let the author of this book tell you in his own words:


“What follows is probably the most unusual case in modern times. It is the story of Edward Gein, America's most bizarre murderer, grave robber, maker of exotic household items, wearing apparel, and possessor of undoubtedly the finest private collection of female heads, vagina, vulvas and unquestionably the most notorious character ever to stand before me in court.” 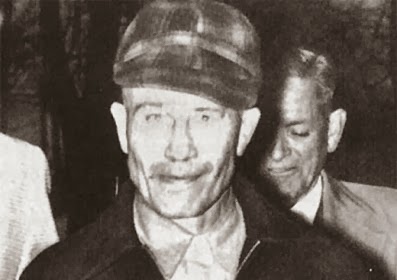 Without Gein, Robert Bloch would not have written the book that became the ultimate slasher film Psycho; same goes for Thomas Harris, who would not have written The Silence of the Lambs. And perhaps the most “accurate” account of Gein’s crimes, never would we have met Leatherface, Grandpa, and the whole Sawyer clan with Tobe Hooper’s The Texas Chain Saw Massacre. (As far as films go, I’m only naming the good ones. There are far far more titles, and boy, do they plummet that ladder of quality.) Gein even enjoyed a brief appearance in the recent Anthony Hopkins film Hitchcock, in which he was played by character actor Michael Wincott.

Being that I am a true crime obsessee, Edward Gein, America's Most Bizarre Murderer  seemed an obvious choice for me. I find Ed Gein to be nearly as fascinating as I do Carl Panzram—in fact, it was through reading Killer: A Journal of Murder that I realized reading horrific accounts that befall humanity when crossing paths with the inhumane, while morbidly interesting, can be that much more interesting when the text utilizes the subject’s own voice. It was after reading this that I decided any further reading on a particular true crime would hinge on that one requirement. After reading something as powerful as Killer:  A Journal of Murder—a tome comprised largely of Panzram’s own words—other true crime accounts I’d read by people unconnected to the cases they were examining utterly paled by comparison.

Though I’m sure true crime authors who have written about all kinds of serial killers/mass murderers have done their homework, I’d rather read about it from the point of view directly connected to the case. That, to me, makes the book seem more legitimate. Very rare can such a book be made up of the subject’s own words, as, by law, a killer cannot profit off the sharing of his or her crimes. The next best thing is to get the story of someone who was there.


Edward Theodore "Ed" Gein (August 27, 1906 – July 26, 1984) was an American murderer and body snatcher. His crimes, committed around his hometown of Plainfield, Wisconsin, gathered widespread notoriety after authorities discovered Gein had exhumed corpses from local graveyards and fashioned trophies and keepsakes from their bones and skin. Gein confessed to killing two women – tavern owner Mary Hogan on December 8, 1954, and a Plainfield hardware store owner, Bernice Worden, on November 16, 1957. Initially found unfit for trial, after confinement in a mental health facility he was tried in 1968 for the murder of Worden and sentenced to life imprisonment, which he spent in a mental hospital.

I’m not sure that I would call Edward Gein, America's Most Bizarre Murderer, the definitive account on Ed Gein the man, but as for the crimes that rocked Plainview, Wisconsin, in the late 1950s, as well as the trial that would follow a decade later, it does provide a pretty complete overview of the case. Interviews with psychologists, law enforcement, and transcripts directly from the trial are provided—sometimes with mixed results. When the subject of discussion is of Ed Gein, or his crimes, then the book is incredibly interesting and compulsively readable, but in the interest of providing detailed accounts of how evidence was removed from the scene to satisfy the reader who might, perhaps, doubt that Gein was responsible for the crimes of which he was charged, pages upon pages of explanations on which guns were removed from the scene, and which bullets were found, and which bullets fit which gun, and could you describe how these bullets were loaded into this gun?, and on and on, it can read monotonously after a while. Ditto for the fingerprinting techniques, which also went on for too long.  Again, this was crucial testimony for the prosecution, and I understand its inclusion in the text; it just doesn’t make for compelling reading. For the legally minded, however, I’m sure this particular material reads just as interestingly as the others.


The book really pulls no punches with the sharing of very graphic details, even going as far as including crime scene photographs taken of one of Gein’s victims—flayed and mutilated like a hunter would a deer.

Oddly enough (and perhaps for padding purposes), following a trend the judge noted occurring at the time, also included are examples of “Gein humor”—more specifically, jokes that began circulating following the news of his arrest, and for which type of crimes. These are as bad as you might suspect, but were probably hilarious to Wisconsin farmers in the late 1950s.

Q: Why did Ed Gein's girlfriend stop going out with him?
A: Because he was such a cut-up.

Q: Why did they keep the heat on in Ed Gein's house?
A: So the furniture wouldn't get goose bumps.

And, you know—other jokes just as stupid.

The book ends with one final interview, performed between Judge Gollmar and Ed Gein, with the latter being forever confined to a mental asylum for the criminally insane. This is the only point in the book in which Gein comes off as aloof—even lighthearted—and it makes you wonder if this man had played the entire court system in order to get away with murder. Yes, his sentence was still life behind bars, though they were not prison bars, but those of a hospital, where some of his rights and comforts would still be maintained. To summarize the defense’s entire strategy, a tactic combining claims of an accidental shooting and “I don’t remember what happened” allowed Gein to skate having to plead guilty to murder. And this was perhaps the most interesting part of the book. Yes, women being killed and mutilated, and bodies being unearthed from graveyards, all makes for cheap shocks and creepy thrills, but the most eye-opening was the spotlight on the American justice system. The prosecution and the judge knew Ed Gein was guilty of murdering at least two women, and likely responsible for dozens of other disappearances from surrounding areas. They simply knew it. The dissected body of one of his victims was found strung up in his shed, decapitated, and shackled with ropes as if she were a trophy deer shot during a hunt. But despite this, coupled with the fact that his confession was later thrown out, as it was determined to have been delivered under duress and persuasion, certain evidence obtained during the investigation was deemed inadmissible because preliminary investigating law enforcement did not obtain the proper search warrants to enter his property. That and Gein simply had no motive.

That loopholes like that exist in our justice system is actually scarier than any old murder.

Edward Gein, America's Most Bizarre Murderer is essential reading for anyone interested in the murderous exploits of Ed Gein, or those interested in true crime, but it may perhaps be invaluable to those considering entering law as a career. And if you'd also like to know the silent partner behind some of your favorite horror films, he's been waiting for you. 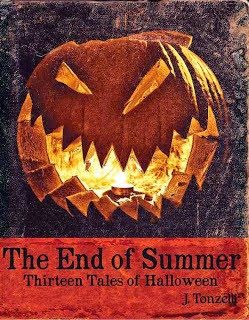 The world’s oldest celebration comes to life in The End of Summer: Thirteen Tales of Halloween, an anthology that honors the darkest and strangest night of the year. Each story is designed to be intrinsically and intimately about Halloween—its traditions, its myths, and its effects—and they run the gamut from horrifying to heartbreaking. Halloween night is the tapestry through which a haunted house, a monstrous child, a late-night drive to a mysterious destination, and other tales are weaved. Demons are faced, death is defied, and love is tested. And not everyone makes it out alive. The End of Summer has arrived.