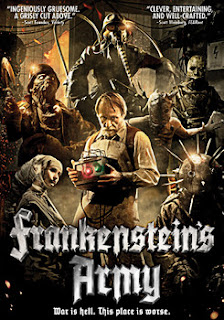 I'm just gonna come out and say it: Frankenstein's Army doesn't really have that much of a plot. And since it wants to involve the mythos of the Frankenstein legacy (which, by now, has become almost a genre unto itself), then you could argue it has even less of a plot.

I think the filmmakers kinda know what, which is why they went the extra mile in creating some absolutely jaw-dropping creatures to fill those damned bunker tunnels and maze-like corridors.

A group of Russian soldiers, in the midst of World War II, traverse the German wilderness to root out and extinguish the Nazi threat. While doing so, they stumble across a decrepit village that no longer seems inhabited. However, below one of the many buildings in this village awaits a threat more monstrous than the world has ever known before.

And because the soldiers are filming this journey for some reason, you get to experience it all first-hand.

That's primarily it for your plot, but like I said: the plot is inconsequential. It is the equivalent of, "I've got this camera. Oh, what's that?" (Monsters.)

Every once in a while, that's simply okay. Sometimes we would rather just have a fun, spookhouse environment where things literally leap into corridors and thrill us with their imaginative and completely wild appearance. And that's what Frankenstein's Army is, really. It's a filmified version of any haunted hayride or Halloween walk-through you've ever visited. You walk around, you see creepy things, the things get progressively creepier, and you get hammy acting all over your sweater.

Speaking of the acting, it's good enough to not make you say, "The acting in this fucking sucks." And the use of the camera is certainly serviceable, though I am curious about the choice to go with the found footage aesthetic, considering the film is a period piece. Though they make an attempt at first to add "camera whirring" sound effects and some light old-timey grain, after a while both of those ideas are dropped, and we're left with some pretty impressive crystal-clear footage...ya know, for the mid-1940s. And even from an artistic standpoint, the found footage angle doesn't add all that much, anyway. It's still more than possible to achieve that kind of "you're really there" feeling without succumbing to the newest Hollywood gimmick. (See Alfonso Cuarón's Children of Men as proof.)

But why we're really here is for what's promised by the title: we want to be surrounded by a group of walking, drooling, shrieking experiments. And that we are!

The production design and special effects/make-up teams should be universally applauded for their wicked and wild creations. They are something straight out of a nightmare, dripping with steampunk inspirations with a twist of Nazi madness. I wouldn't go so far as to say they are the only reason to watch Frankenstein's Army, but if they were not made the front and center of the action, my argument to convince you to watch otherwise would not be nearly as exuberant. I fully admit that Karel Roden (quickly becoming one of my favorite character actors) turns out an incredibly fun and insane performance as Viktor Frankenstein, grandson of the original grave-digging and monster making mad scientist, but for real y'all, here are your reasons to watch: 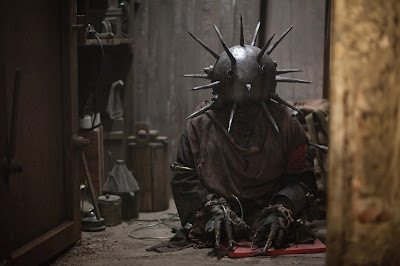 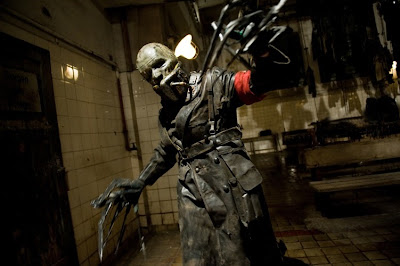 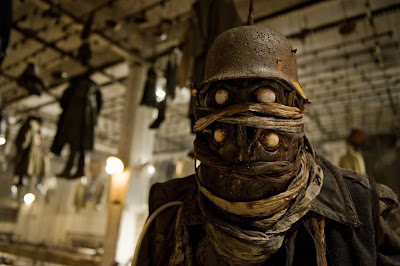 So do it. If enough of you do, maybe they'll make House of Frankenstein's Army.

I'd be all over that.