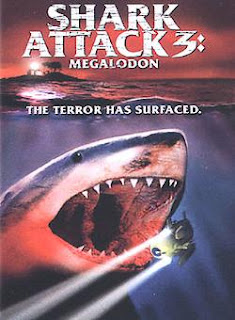 If you can believe it, there was once a time when low budget shark movies were made simply because someone said, "You know what the world needs? Another killer shark movie." It wasn't due to stunt casting or a deliciously stupid gimmick (sharks with two heads, sharks with bombs inside them, sharks chasing after "Jersey Shore" knock-offs) that a killer shark movie was made. No, it was during this purer time when the Shark Attack trilogy thrived, and when it reached its peak of utter stupidity with this:

It begins, much like any other killer shark movie, with a bunch of divers looking for something uninteresting and being killed off-screen by some pretty gnarly Shark Week footage. The Bulgarians-Playing-Americans (Bulgmericans?) really don't like this, and they chomp cigars and scream "oh, jeeze, no!" right into our faces.

After this terror, we cut immediately to Big Grins Island, which, based on the music, must be in Mexico (Bulgaria).

We meet some young studs who love to grin and smile, make some jokes, and then do some more grinning and smiling. I'm not sure what's so funny or fun, but my mood has already drastically improved.

These men, who are some sort of lifeguards, take time out to randomly say aloud what the other person should already know. This is called "exposition."


Our men separate so that one may dive and the other may remain in a boat and say more Mexican things. "Asta la vista!" Or, you know, something else.

It's soon established one of these men - the one who speaks the best English - will be our lead. And why not? He's young, handsome, and a no-nonsense type of guy capable of showing off one simple emotion: smile. 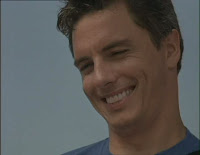 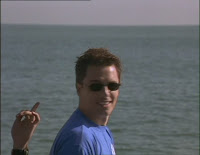 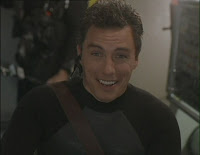 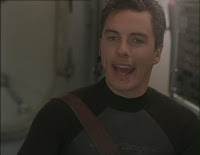 And to mix things up: 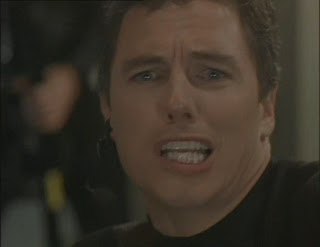 Main Guy Diver swims along the bottom of the ocean and finds a shark tooth, confirming years of scientific theory: There are sharks in the ocean. Some Jaws rip-off music leads to a fake scare and the scene ends, and I have lost nearly ten years off my life from the white-knuckle tension David Fucking Worth has mastered.

This diver, who doesn't have a name yet, goes home and logs onto his Shark Fan Forum and posts this message (verbatim):

MYSTERY SHARK
Found This Shark's Tooth ,
But Can't Determine Species.
Any Suggestions Anyone?

Then he sits back and anxiously awaits someone else to solve his problems for him.

Meanwhile, in San Diego (another part of Bulgaria - Bulgiego?), we're introduced to our female marine biologist, who shares a brief conversation with perhaps the most incoherent security guard since someone hung a guard's uniform on a cactus and another person accidentally asked that cactus for directions to the gift shop. She goes into her office and logs onto Shark Fan Forum and sees the MYSTERY SHARK message. Her intrigue is palpable.

Later we meet even more characters who struggle with English, one of whom looks uncannily like H.P. Lovecraft. They discuss how some of their underwater equipment is getting fucked up by sharks, and after a bit more unintelligible conversation, the nameless diver leaves.

As we meet a couple fucking in the water, and as their passion is inter-cut with stock footage accidentally showing two different shark species (oops!), I'll take this time to share with you that the best film of this director's filmography is Kickboxer (yes, with Van Damme, and yes, from 24 years ago).

And we have a name!

The San Diego-ahn (San Di-eh-gan?) marine biologist scours the beaches looking for one Ben Carpenter. "I saw your message on the Internet," she explains. "One time I saw sandwich at the food store," she might as well say. But Ben is tickled pink to see her. Speaking of tickling pink, Shark Attack 3: Megalo-Fucking-Don features perhaps the best improvised line of dialogue of all time. I'll share it with you a little later.

While our characters enjoy some bland conversation, allow me to point out the acting in this film is fucking abysmal. Normally that goes without saying, but I still feel the need to confirm it. If smiling was an emotion, some would call Ben Carpenter emotionally reckless. It's also painfully obvious everyone's dialogue has been ADRed, so it makes the already lifeless performances that much more awkward, as everyone inadvertently sounds like a 1930s hard-boiled detective.

After setting out into the deep blue for some recon, our marine biologist and her two stooge deckhands marvel at the grainy and cropped stock footage happening right next to their vessel.

"Whoa, look at it!" someone shouts, as I expect to hear Discovery Channel's Mike Rowe rattle off a random shark factoid and then make a wry comment.

The shark attacks, bites dumbly at nothing, and leaves behind a tooth. Our marine biologist, whose name I forgot to mention is Cat, confirms it's the same kind of tooth Ben earlier discovered, so she tags the shark with her tagger pole and celebrates with some unconvincing profanity.

Ben runs off because he's really sensitive and the two later reconvene at the dock, where they share some awkward sexual tension. He lets her come aboard his boat, so long as she recognize he's in charge.

"At the first sign of trouble, I'm taking it out," Ben tells her as I laugh.

She agrees, they set out on their expedition, and they find the shark pretty quickly, considering the ocean is fucking gigantic.

"Full throttle, now!" demands Captain Ben, his hand hovering inches from his wang, ready to take it out at the first sign of trouble. They film the shark with their huge VHS camera as they see it approaching the shore.

They chase the shark for a bit and Ben shoots at it, but then they lose sight of it because, ya know...it's a shark in the ocean. With horror they realize the shark is going after a group of drunk para-sailors (always a good idea), as the one in the chute bellows "yes, sir!" in her utter joy at defying gravity. She sees the shark and yells a lot, but her drunk boat captains just think that's just her fun-scream. Too bad for them, as one ends up in the water by accident.

We then see stock footage of the shark eating giant chunks of pork, which we are to play along with and pretend to think it's a human body. Then the shark bite-grabs the tow line for the parachute and drags the girl beneath the water, where he feasts on her supple feminine body and growls like a tiger as he tears her apart. 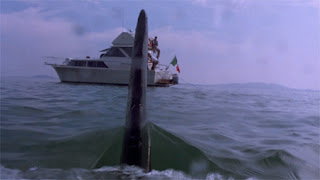 Later, Cat is in bad shape, feeling immensely guilty for being unable to save the poor girl. "If only I hadn't lost my grip on the girl's wrist 37 times..." she wonders.  Ben cheers her up by taking her to meet his old man friend, who provides a theory on why the sharks are going crazy: electricity. He tells Cat he is going to "hack" some government files to see what he can discover.

They leave and Ben has an idea. He points to a church and says, "We're gonna need all the help we can get!" The two go inside and light some official God candles, and the choral music suggests everything is going to be just fine.

During this, the old man makes good on his promise to hack some government files. In case you're wondering, his idea of hacking is to look up in the air and wonder aloud, "Okay... what's... your... password?" Somehow, this works, and like every other movie about killer animals, he finds it's actually people to blame!!!!!!!

Our heroes set out to kill the shark... with a shotgun... and as you can assume, it doesn't work all that well. Instead, the shark bursts through the underbelly of the boat and attacks Cat, but luckily Ben is there to beat it with a stick and scream "DIE!" over and over.

Through some very poor luck, or perhaps bad circumstances, this tactic simply does not work. But it does allow Cat to grab the submerged shotgun, bellow "You're extinct, fucker!" at the shark (which is a great white, so, not extinct) and blow its shark brains off.

So all is well, right?

Of course, WRONG. This movie is called Megalodon, after all, and considering we've only seen normal-sized sharks, it was only a matter of time before the big bastard made an appearance.

With more glory than Jesus Christ himself, our filmmakers take footage of a real shark breaching the surface and chomping its jaws, and digitally insert boats or divers inside his mouth, making it appear as if they are being devoured by a gigantic shark.

It doesn't look at all good - especially when they use the same stock footage for different sharks - but my god do I love it. 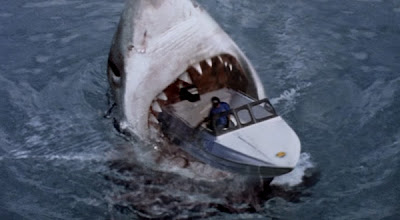 Ben tells his Lovecraftian-looking boss about the megalodon and shows him a gigantic tooth, but in an effort to try something new, this time the government bureaucrat refuses to do anything about it. Ben says "then I will!" and then for some reason leaves behind the only proof they have.

Ben, Cat, and the old man all meet at the dock to discuss their next course of action. Then, the following exchange takes place:


Cat grins, and they do just that, set to the same Christ-like music we heard earlier, now complementing some glorious, Prism-era, slow-motion, soft-core action. Buttocks are squeezed, neck bones are licked, watches are checked (mine).

The next day, our heroes set off on Mission: Kill the Shark. They have everything they'll need: an arsenal of explosives, a vessel, and their bland white personalities.

Across the water, pretty much all the people we've been conditioned to severely dislike are on the same yacht for some kind of presentation about some pretty cutting-edge technology. Each jerk-off we don't like each has a hand in the presentation; watch as each actor struggles to remember their elongated dialogue, pausing for full stops to allow their brains to catch up.

The shark bumps the yacht and knocks all the rich people's diamonds and cash out of their clothes. Panic immediately ensues, and rich folk begin strapping on life jackets and throwing themselves overboard... right into the waiting jaws of some badly manipulated stock footage. Some of the jerk-offs throw grenades at the shark (which they have on board for some reason), which doesn't work.

Somewhere along the way, this happens:

After a lot of fumbling around and light swearing, Ben and the old man manage to shoot a missile directly into the shark's big fucking mouth and blow it into Chicken of the Sea.

"Megala-WHO???" Ben jokes at the end, as the blood of the innocent fallen diffuses into the ocean tide around him. He also smiles.