1340 KAB: THIS IS STEVIE WAYNE, YOUR NIGHT LIGHT

It had been a long day for Al Williams. With the April heat suddenly coming on in full force, all he had wanted to do was stack the Sea Grass with a few twelve-packs and head out into Bodega Bay with Dick and Tommy. Making this difficult was Kathy, his well-meaning but neurotic wife, who had been driving herself crazy – along with Al by default – trying to organize the town’s Centennial. “Had the statue been finished? Had the candles been ordered? Would the dark and somber Father Malone remember he was to perform the benediction?” That’s right, their town of many years, Antonio Bay, was turning one hundred years any minute, and while many townspeople seemed excited at the prospect, he could only scoff and wonder if he should be so lucky to live that long. But he had finally managed to escape, and after handing off the final case of beer to Dick and Tommy, who waited impatiently on the Sea Grass, they shoved off from the docks and motored for a while – far enough away where the only sign of life from town came in the form of some phantom dog barks, but close enough that they could still pick up the signal from the KAB station lighthouse off Spivey Point.

He needed this – bad. Good friends and cheap beer, and sure, maybe they’d try to catch a fish or two. His old vessel creaked and cracked like she were about to fall apart at any moment, but she was sea worthy, alright – he'd been taking her out for years.

He wasn't sure where to set his sights: Whateley or Arkham Reefs, maybe. But he knew the where didn't matter; all he wanted was to kill his engine and drift along with the tide. The journey to the docks where the Grass was tied had been a long one – figuratively and literally – and the evening had grown dark and late. But everything was perfectly in place now, and hopefully, nothing would come along to ruin it. The water was calm, softly lapping at the Grass’ hull, and the sky was clear – not a bad patch of ominous looking weather in sight. And the men had all night to fish – Nick couldn't make the trip, but had said he'd meet them back at the dock at 7:30 the next morning for breakfast.

Al settled into his cot, snapped a beer, and flipped the switch on his ancient radio.

And Stevie Wayne’s show was already in full swing… 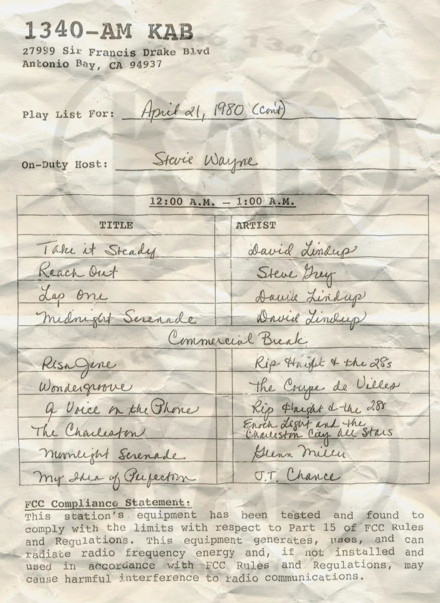 Notes:
1 In order to present all the source music heard in The Fog, I had to play around with the film's timeline. Technically, 1340 KAB transmits on two separate nights, so in order to recreate these two shows as one uninterrupted program, I had to do some combining.

2 Only one track from the film does not appear, as far too much of it was talked over, chopped up, and impossible to isolate. I was unable to locate its title or artist to secure a clean copy, so I replaced this missing track with "The Charleston," which is a pretty good doppelganger. Additionally, I added "Moonlight Serenade," which does not appear in the film whatsoever, but I needed one more track to end the show, and it seemed in keeping with the station format, especially alongside the Lindup/Moorehouse stuff.

3 Three of the songs found in the track-list have made-up names, as ID information on them is non-existent. The song titles are phrases lifted from the film, and the artist names are bits of John Carpenter-related trivia (for extra dorkiness).

For all of these artistic liberties, I would normally say I'm sorry, but I'm not, because this was really, really hard.
Posted by TEOS at 12:00 AM