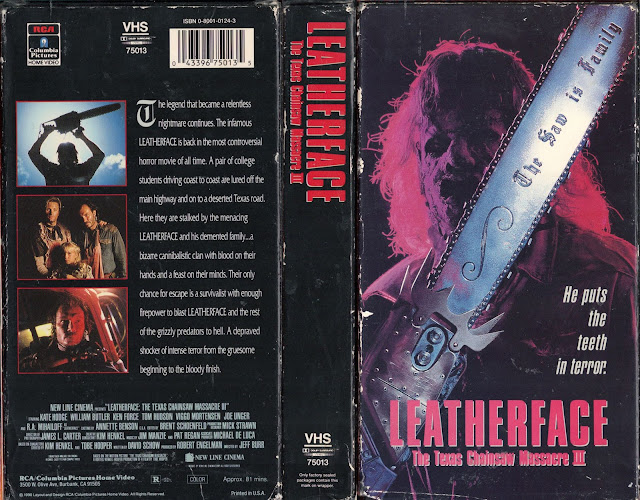 And meanwhile, sitting quietly in the corner, is 1990’s Leatherface: Texas Chainsaw Massacre III, the most middle-of-the-road film in the series, and the first to be released by a major studio...so you know what that means: studio interference and MPAA ball-breaking. Video editions of the sequel sport the “unrated” cut, restoring some of the grue and gore that was originally shot by director Jeff Burr that was then removed following a battle with the MPAA, although awkward edits that cut away from the violence suggest an even more violent version that has yet to the light of day. Famously, Leatherface: Texas Chainsaw Massacre III features Viggo Mortensen in one of his earliest roles, and he's spoken candidly in the past about his work on the movie as well as its final iteration seen by audiences:

“[Shooting that movie] was fun. I don’t know how many times they sent that to the censors … They kept getting X’s and so they cut so much out that I think the movie is only like 70 minutes long. Unfortunately most of the really funny jokes were associated with gruesome bloodletting of some kind or another.” (Source: Carpe Noctem Magazine). “The movie company got cold feet and cut away the most terrifying and gruesome scenes, and it ended up being a rather incoherent movie.” (Source: M/S Magazine).

Despite Mortensen’s misgivings, Leatherface: Texas Chainsaw Massacre III, in its "unrated" form, is a perfectly acceptable entry in the chainsaw-wielding series, though except for adding a pint-sized kid to the Sawyer clan and a survivalist into the mix, it doesn’t try anything new. Burr, however, definitely gets points for casting horror-friendly actors, including William Butler and Jennifer Banko from Friday the 13th: Part VII — The New Blood, Ken Foree from Dawn of the Dead, and Mortensen, who at that point had done Renny Harlin’s Prison and the thriller Tripwire. Adding to that, Burr’s level of mayhem and bloody violence is admirable and appreciated, as is the blackest of black humor lifted from the original (and skipped by its sequel in favor of broader stupidity). Where Leatherface: Texas Chainsaw Massacre III lacks is through its somewhat meandering pace (a LOT of time is spent with our characters wandering around the Texas woods) as well as its closeness to the original’s plot, which prevents it from establishing more of an identity. 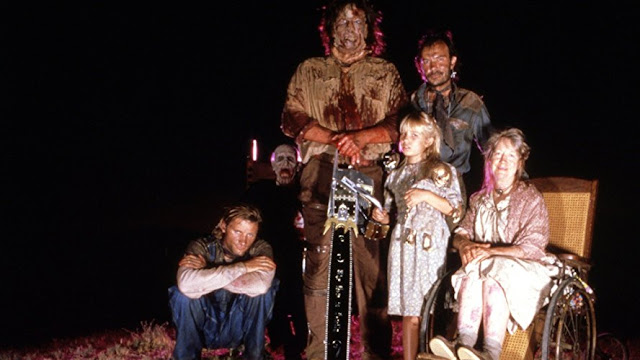 Burr follows the “if it ain’t broke” mentality, but by doing so, he’s only further welcoming comparison to Hooper’s seminal original, at which point Leatherface: Texas Chainsaw Massacre III doesn’t stand a chance. This isn’t necessarily his fault, as original distributor New Line Cinema had acquired the Chainsaw rights from Cannon Films in hopes of softly rebooting the series and creating a new direction where Leatherface would be its prominent boogeyman, similar to their very successful Nightmare on Elm Street series (hence the titular madman being called out in the title). That at least explains why Leatherface: Texas Chainsaw Massacre III feels like a loose remake, although the dismal box office return put New Line’s plans on the back burner for several years. It’s also a little odd that New Line’s desired to make Leatherface more prominent a la Freddy Krueger, being that he has no more or less screen time here than he did in the original film. By comparison, Mortensen’s “Tex” gets way more to do. (I’m also trying to figure out where all these additional family members keep coming from. Are they actually related to Leatherface, or just a bunch of random Texan psychopaths who somehow found each other in the age before Craigslist? If they’re actual relations, where the hell were they during Dennis Hopper’s duel-chainsaw smackdown at the end of the previous sequel? Were they on vacation, or at mass? How do they multiply? Are they the products of inbreeding? What the hell goes on in the backwoods of Texas, anyway?) (I have to sit down.)

Leatherface: Texas Chainsaw Massacre III, despite the obviously tacked on ending, and that its “unrated” form still seems toothless at times, is a decent sequel and worthy of appreciation...only when looking at the other sequels. After seeing how off the rails the series eventually goes, Leatherface: Texas Chainsaw Massacre III might even now be considered a high point — depending on who’s looking.