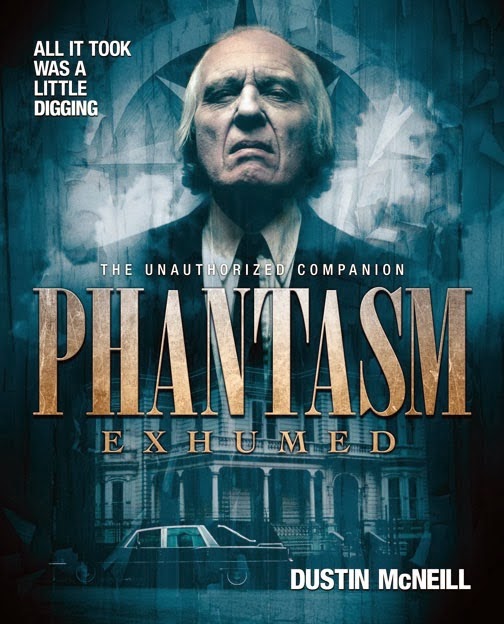 Perhaps it all began with William Schoell's The Nightmare Never Ends: The Official History of Freddy Krueger and the Nightmare on Elm Street Films, the first modern book to tackle a series in its entirety (at least, at that time) film by film. A loving ode and heavily researched retrospective on a fantastical series, it would be one of many books to come down the pike that celebrated, analyzed, and perhaps even poked fun at the various entries that made up the film franchise being discussed. Following in Schoell's footsteps were Fangoria writer Bill Warren's The Evil Dead Companion, Stefan Jaworzyn's The Texas Chainsaw Massacre Companion, Peter Bracke's amazing piece of printed art, Crystal Lake Memories: A Complete History of Friday the 13th, and 2006's quietly released The Hellraiser Films and Their Legacy by Paul Kane. With Halloween: The Complete History coming (eventually) from author Justin Beahm, it would seem we've now got at least one series retrospective celebration on every one of our beloved horror movie villains*. That is, until Dustin McNeil came along, knowing that there was still one villainous madman out there who had yet to have his exploits examined with as much detail and devotion - one madman with perhaps the most devious and despicable plan for humanity of all those that came before and after him.

Said madman was also the tallest.

With the still-warm release of Phantasm Exhumed, author McNeil has done the Phantasm phamily and phans more than a service with his excruciatingly researched book. Finally, this series that never had the same marquee value as Jason or Freddy, and whose own successive entry had the power to turn off the casual viewer, instead entrapping those who became madly intrigued by the surreal and the absurd and fucking insane developments that the series would continuously offer over its 35 years in existence, Phantasm has its own slot on every horror aficionado's book shelf. And it honestly could not have been better.

Phantasm Exhumed covers every film in the Phantasm series, including the long-awaited and much-mooted Phantasm: RaVAger**, as well as the first two films in writer/director Don Coscarelli's career, Jim the World's Greatest and Kenny & Company. Prominent players from every film are on hand to share their recollections and experiences with the author, some with great fondness, some with bemusement, but all of them agreeing on one thing: that Don Coscarelli was a hell of a good guy, a kind-hearted professional, and destined to be making films. Chief among these participants are the hilarious A. Michael Baldwin (Mike), soft-spoken and humble Bill Thornbury (Jody), lovable Reggie Bannister (Reggie), and the absolutely eloquent Angus Scrimm (The Tall Man). Their voices join those of other familiar names, along with some not-so-familiar ones, to peel back their Phantasm curtain and let us phans in on the full story, much of it being shared for the first time. (On a personal note, I was also happy to see coverage of Jim the World's Greatest, as that remains a mythical part of Coscarelli's past. Once owned by Universal Studios, the film rights have since reverted back to the original production company, which no longer seems to exist. The film has never been released on any kind of home video format; the damned thing hasn't even leaked to Youtube or the torrent world [and believe me, I've been looking]. If this the closest I can ever get, I'd consider the matter at the very least satisfied.)

Considering myself a seasoned phan, I went into the book confident that I'd know a fair amount of the info to come - the three-hour cut of the first film; the cabin-fever setting where Don wrote the script; his original inspiration for making a horror film coming from a haunted-garage scene in Kenny & Company - but I was also confident I'd be learning stuff I hadn't previously known, being that I'm not that up my own ass. But I couldn't have prepared myself for how much I simply did not know about Phantasm and its phamily. Phantasm's original title was Morningside? Coscarelli originally tried to direct the eventual adaptation of Something Wicked This Way Comes before refashioning that concept into the Morningside script? Fucking Bill Thornbury met with George Lucas about possibly playing Luke Skywalker?

And if you think I'm giving away all the non-common stuff, I haven't even scratched the surface of what Phantasm Exhumed has on display. Boasting interviews with every key player and crew member from the entire Phantasm series (though Coscarelli, as well as Phantasm II alumni James Le Gros and Paula Irvine, sadly declined involvement), and rare never-before-seen photos taken by the people who were there and experienced it first-hand, no kind of Phantasm retrospective will ever be as definitive. Prior to this, the Phantasmagoria documentary available only on the Anchor Bay UK Phantasm box set had been the ultimate phan experience.

Phantasm Exhumed now claims that honor. And all it took was a little digging.

The book is available now.

* It's time for someone to announce Chucky Unassembled: The Complete Child's Play History.
** Confession: I glossed over the section featuring Phantasm: RaVager, as I am trying to refrain from learning about the film as much as I can between now and its eventual release date.
Posted by TEOS at 12:00 AM