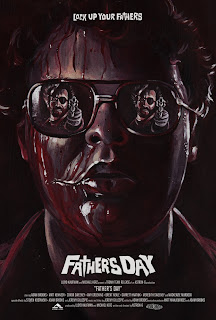 Father’s Day is now my second immersing in the world of Astron-6, a small Canadian film production company responsible for some legitimately fun creations. After first watching Manborg, I knew I’d found something special. But now after watching Father’s Day, I think I found a new group of filmmakers to closely follow, as whatever these fellows create, I need.

Honestly, I think I’m in love.

Though Father’s Day was released by Troma Studios, please don’t let that be a deterrent, and please don’t think it has anything to do with Troma’s other infamous film Mother’s Day.

The plot? Well, someone out there is raping fathers. That’s kind of fucked up, but there’s something about the phrase “raping fathers” that becomes inherently funny. Is it supposed to be? I honestly don’t know, but during the opening credit sequence awash in newspaper headlines that scream “MORE FATHERS RAPED,” I laughed.  Intentional or not, Father’s Day can bank it. 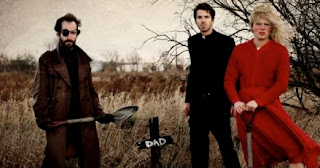 If you’re already familiar with Troma, you should know there’s not much they’re not willing to do to shock their audience. I wouldn’t exactly call myself a Troma fan; except for their one perennial hit, The Toxic Avenger, I can’t say I’ve ever enjoyed any of their films (although a few non-originals they have licensed over the years have brought me unintentional enjoyment). This seems to be one of those non-Troma originals they are lucky to have distributed. Sure, Lloyd Kauffman man appear in the film as God, but this production reeks of something much more original and genuinely entertaining than anything that’s come down from the Troma offices in quite a while.

Father’s Day contains the aforementioned scenes of father rape, along with bodily dismemberment, incest, necrophilia, and not one, not two, but three scenes of penis mutilation.

You know, for kids!

This is not something I normally enjoy. Not because I am squeamish (though I think I can say without shame I don’t enjoy seeing penises destroyed), but because I just think humor like that is cheap. Anyone can build a fake penis out of plastic and cut it in half with a knife, but unless the film wrapped around this gag is worth a damn, then it’s just empty shock. But Father’s Day earns the right to destroy penises. Three times, in fact. This kind of over-the-top sight gag can sometimes seem out of place when juxtaposed against the film’s other far more innocent jokes (toxic berries vs. tasty berries; a man who hyperbolically compares life to the process of fermenting tree sap into maple syrup), but because the Troma brand is stamped on the case, we just kind of accept all the penis biting and move on.

Written and directed by the final onscreen credit of Astron-6, our cast consists of the usual mainstays: Adam Brooks plays Ahab, the eye-patched vigilante out for revenge; Matthew Kennedy plays Father Sullivan, the very gay priest whose job it is to find Ahab’s shack out in the middle of nowhere, and Connor Sweeney is Twink, another very gay young man whose father is murdered by the "Father’s Day Killer" and is out to clear his name.

Oh, and the killer’s name is Fuchman. Chris Fuchman. The first time you hear it, you may ask yourself, “Did I really just hear that?’

Played by the very brave Mackenzie Murdock, Fuchman bares all more than once and has no problem doing some naked grinding on top of other middle aged men. 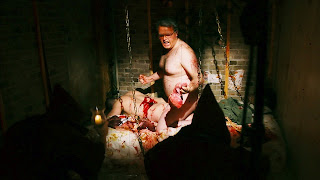 Father’s Day takes a little bit to get going. It starts off with a nice grindhouse feel, but soon gives off the wrong impression that it’s yet another Troma production with little reason to exist. The humor doesn’t kick in right away, and the film is very quick to show off some Troma-esque scenes of shock.

I implore you to keep with it.

Odds are you’re more familiar with Troma than you are with Astron-6. Based on this production, I think it’s safe to say preexisting fans of Troma will find a lot to love about Father’s Day. And Astron-6 once again proves they can play a little bit outside their wheelhouse and come up with something fresh, shocking, and legitimately hilarious.  The best thing that can come out of their association with Troma is more exposure to a broader fan base. They absolutely more than deserve it.

(I also wish we were friends. Because they must be the most fun men alive.)
Posted by TEOS at 12:00 AM