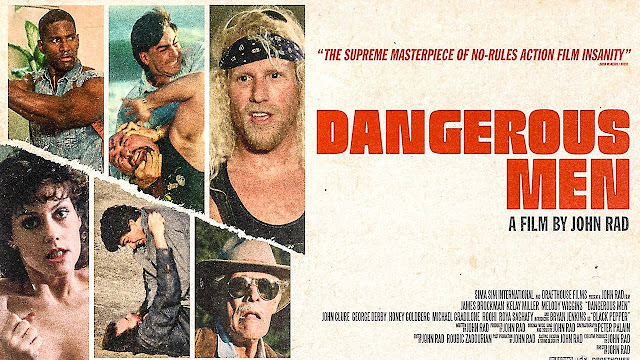 Filmmaking is the most communal artistic medium there is. The impassioned spend years watching and studying films, then attending film schools, and then striking out on their own and working on guerilla-style film sets just to hone their craft. And when everyone comes together, bringing their own specific expertise--whether it be writing, cinematography, or editing--a film happens, and it's through everyone's combined efforts that such a thing were possible.

The opening credits for Dangerous Men prove that everyone's been doing it wrong, as it proudly displays the names man that helped bring Dangerous Men to fruition:

Created and written by John Rad.

A joke surely made a hundred times by now, that opening credits list perfectly sums up Dangerous Men: Rad. Rad all over. Rad through and through. Every inch of film, every stick of production design, every B♭on the keyboard is pure, 100%, unfiltered Rad. But you'll somehow realize this before a single Rad ever flashes on screen, because you'll already have witnessed the title--DANGEROUS MEN--roar onto the screen, only to crash into each other and explode. Following this, you will know there was only one man capable of creating what you are about to witness. Neither David Lean, Howard Hawks, nor Martin Scorsese, literally, could have ever made Dangerous Men. 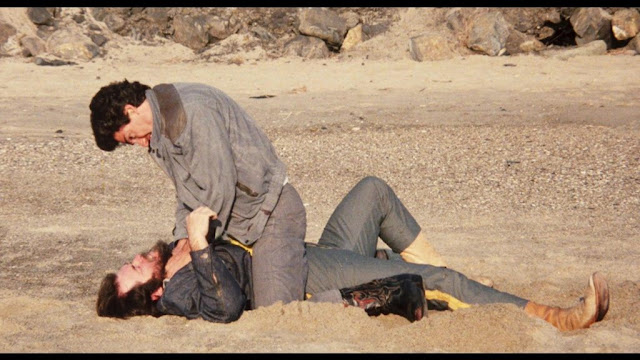 If you clicked on this review already having heard of Dangerous Men, then you likely know the backstory of the very complicated and unorthodox production. Entirely self-funded, auteur John Rad shot portions of the film when he had the money to do so. When there was no money, there was no film. The shooting just...stopped. As you can imagine, this approach made the shoot last just a little longer than usual--like, 22 years longer.

Do you know what happens over the course of 22 years?

Actors quit; technology upgrades; "plots" can become lost over the haziness of time; calendars (seen prominently in the background) can say 1985 in one scene, and 1994 the next.

Haphazardly rewritten to conform to the changes that occur over time (like, say, a lead actress who quits after becoming injured on set), Dangerous Men's plot makes very little sense. Characters are introduced and then completely forgotten. Other characters are introduced at nearly the end of the film and somehow become essential catalysts to the resolution of the conflict. Even Wikipedia, which knows everything about everything, has no fucking idea how to explain it: "The plot of Dangerous Men is somewhat unclear, and changes abruptly towards the middle of the film." 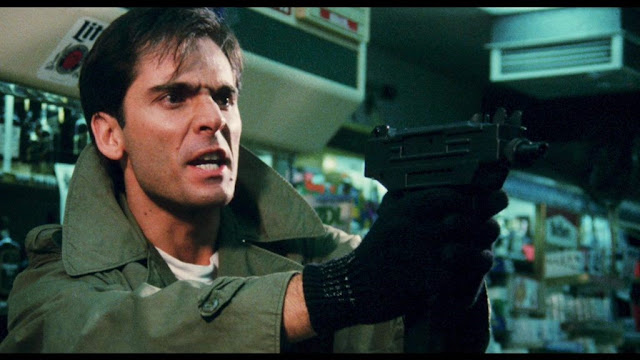 Dangerous Men is completely incompatible with the art of film criticism. There'd be no point in calling out the horrendous acting, writing, directing, etc., or the numerous continuity errors, when you're dealing with a film that feels like a fever dream. It doesn't matter that shot composition is worrisome, or that the movie is clearly comprised of multiple film grades, when there are literally instances of actors reading their lines from on-screen scripts, or the same punch sound/"agh!" yell is used fifteen times in a row between two different characters during a fight scene, or the avenging heroine is obviously holding a boom mic almost-but-not-quite out of the shot, even pointing it back and forth to whomever is speaking at that moment. Critiquing Dangerous Men is like going to PetSmart and complaining that it's a shitty zoological exhibit. It's like licking the inside of a Chinatown dumpster and wondering why you feel so ill. Dangerous Men aims a nuclear-propelled rocket at a planet called "Merely Satisfactory Filmmaking" and falls short by thirty million light years. Dangerous Men trails in every election poll except the one called "Hilarious Tits and Stabbing." Dangerous Men shows up to your mother's funeral in Crocs and board shorts, but you honestly don't care because you LOVE Dangerous Men. Someone once tried to battle Dangerous Men with nothing but hyperbole, at which point hyperbole was added to science books as an official unit of measurement.

Dangerous Men can't be bargained with. It can't be reasoned with. It doesn't feel pity, or remorse, or fear. And it absolutely will not stop. Ever. 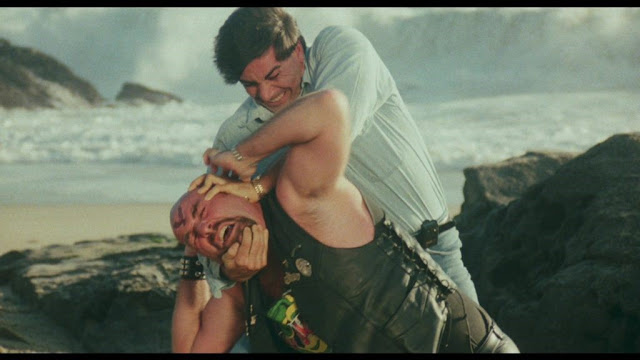 Being that Dangerous Men was shot in chunks over the course of 22 years, some portions of footage look better than others. As you can imagine, the look and integrity of the film gradually improves as it plays on, being that it was shot in mostly chronological order. There are also signs of your usual mistreated footage--print damage, marring, speckling, etc. There's even a cigarette burn or two, which will serve as your befuddling reminder that, yeah, this fucker actually played in a theater. Along with that, the audio on this thing...it ain't great. If someone is sitting in a quiet room, dialogue is clean and clear. If someone is outside on the beach, say, getting almost-raped, or stabbed to death, dialogue is likely muffled by exterior elements, like crashing waves or steady winds. In the film's opening scene, set in a restaurant, all audio has been completely removed between dialogue exchanges, which also contain your usual amount of restaurant ambiance. The very very repetitive and tonally inappropriate synth score by (you guessed it) John Rad can also overwhelm dialogue at times. To summarize, Dangerous Men is capable of offering any kind of consistency when it comes to how it looks or sounds, but seriously, who gives a shit? You didn't even know this thing existed until a month ago, and now you're going to complain?

For years now, people have asked me, "Why do you love bad movies so much? What's the point of watching something bad...on purpose?" Films like Dangerous Men are my answer. And it needs to speak for itself. If you're a bad movie connoisseur, run--don't walk--to the phone in your hand probably right now and order up this bad boy. You will not be at all disappointed.

Dangerous Men is now available on Blu-ray from Drafthouse Films. 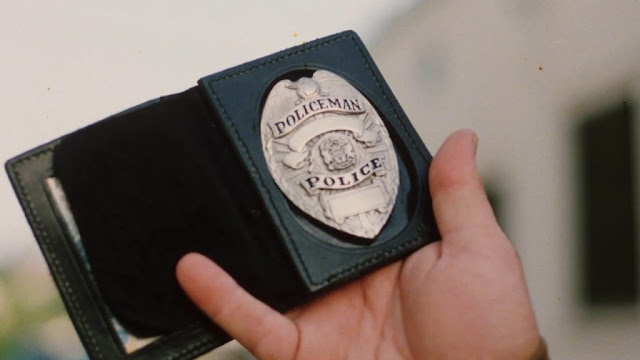