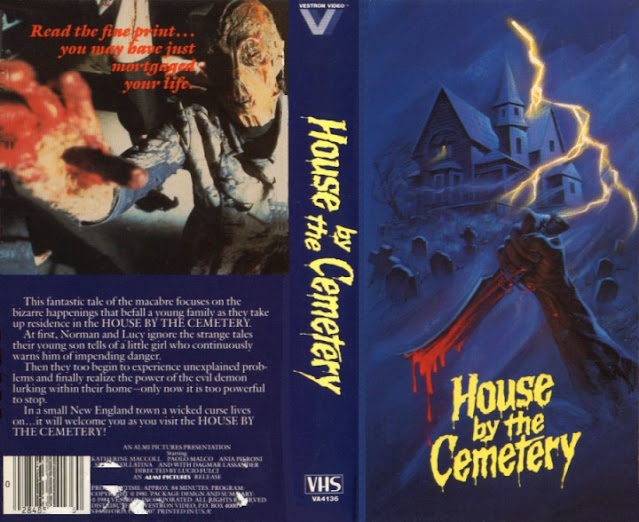 Second only to Dario Argento, Lucio Fulci is likely Italy’s most infamous and highly regarded director of horror, murder, and the macabre. Though Fulci’s Don’t Torture a Duckling is considered to be the director’s masterpiece, it never achieved the same amount of adoration as Argento’s own masterpiece, Suspiria. Having said that, the bulk of each director’s filmography has very different goals. While Argento was more interested in sexualized murder-mysteries, Fulci, though his earlier work explored similar material, eventually became indebted to the “monster” sub-genre. Perhaps best known as having directed the famous unofficial Dawn of the Dead sequel Zombie, he also helmed what’s known as the unofficial “Gates of Hell” trilogy. Not quite zombie movies, City of the Living Dead aka The Gates of Hell (1980), The Beyond (1981), and House by the Cemetery (1981) tread familiar ground about a remote or infamous location concealing a literal doorway to hell that becomes inadvertently open, unleashing sentries of the dead to kill in extremely gruesome ways. This theme and the presence of lead Catriona MacColl in all three entries are the sole ties that bind them together, along with Fulci’s unrelenting dedication to executing the goriest and most surreal deaths you’re likely to see in Italian horror.

As usual with “trilogies,” every fan has his or her own favorite (I’ve always been partial to City of the Living Dead, even with its hilariously nonsensical and unfinished ending), so I honestly don’t know where House by the Cemetery lands with fans. I do know that it’s among the director’s most unintentionally amusing, mostly thanks to the character of Bob (Giovanni Frezza), an unnaturally cherubic looking young child dubbed in post-production by what sounds suspiciously like a grown woman putting on a “kid’s” voice. A line of dialogue as simple as “My name is Bob” shouldn’t be as funny as it is, but it’s part and parcel with how charmingly clumsy all of House by the Cemetery is. Each film in the trilogy isn’t known for its concrete and fluid storytelling (The Beyond is downright befuddling), and House by the Cemetery continues the trend by presenting a story that somehow feels both incomplete and overstuffed, seemingly propelled by the movie operating by its own rules. Zombies, ghosts, potential and otherworldly co-conspirators – Fulci is ready and willing to throw them all against the wall to see what sticks – if it does: great, and if it doesn’t: whatever. This is and always has been the Italian way: directors feeling more indebted to atmosphere and style than presenting an air-tight story with every t crossed and i dotted; so long as there is forward momentum that eventually leads the audience to the conclusion, even if they stumble through the dark for most of their journey, then that’s good enough.

As far as generating genuine terror, there are moments that work as intended, and sometimes, it would seem, in spite of the flick’s clumsiness. None of it ever makes much sense, like young Mae (Silvia Collatina) hallucinating walking nightmares of headless, bloody mannequins or the extended bat attack that goes on forever. When Bob has his final-act encounter with the walking terror that haunts his new country house, the sequence goes on for so long that the action turns from suspense to tedium before turning back to suspense again, and it’s because Fulci reinvents the sequence with added horrific imagery during a chase scene that is already horrific enough. (I’m just speculating, but this sequence seems to have informed how James Wan directed one of the creepier scenes in The Conjuring, featuring Vera Farmiga’s Lorraine Warren cowering from a hanging specter in a farmhouse cellar.) Also helping the scary agenda: Italian horror has never shied away from not just gore, but from committing on-screen taboos. Children aren’t safe from their film’s respective boogeyman threats, and neither are the lead characters whom we are brainwashed to believe that just because their names are first in the opening credits that they’ll walk away terrified but relatively unscathed. Anyone can bite it at any time, and when it comes to Fulci, everyone normally does.

Italian films, especially horror films, have their own look, feel, and complete disregard for a cogent story. Because of this, the style is upped significantly to at-times overbearing degrees. Characters rattle off more extraneous dialogue than is necessary; the camerawork, though fluid and beautiful even when capturing moments of the grotesque, can sometimes come off as excessive. Take that, add in all the aforementioned gore, and there you go: Italian horror. There’s nothing like it, and that’s both good and bad. House by the Cemetery, for better or worse, is the prime example of that.

House by the Cemetery is now available in beautiful 4K UHD and 3-Disc Blu-ray editions.

Email ThisBlogThis!Share to TwitterShare to FacebookShare to Pinterest
Labels: blue underground, city of the living dead, haunted houses, house by the cemetery, italian horror, lucio fulci, the beyond, the gates of hell, zombies
Older Posts Home
Subscribe to: Posts (Atom)