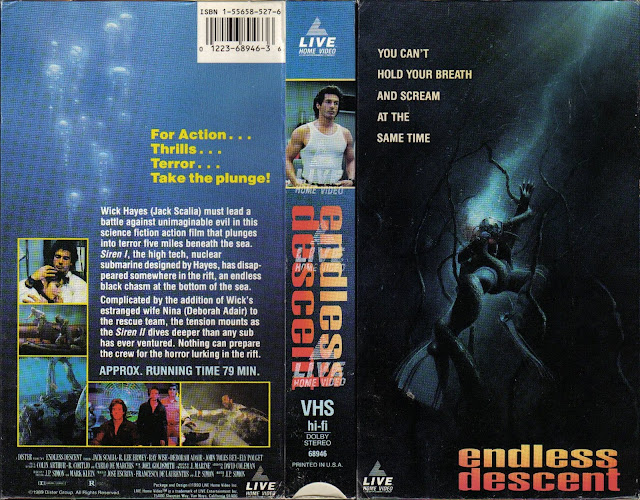 With a mere two films, director J.P. Simon has done more for my life than other filmmakers who have made actual good films that I liked reasonably well. The first of these discoveries was Slugs, bought on a whim at a local record-and-tape trader I frequented for the sole reason of seeking random and obscure horror films. With the cover art of a dead woman’s bloody face leaning against a bathroom tiled wall, and with a slug right next to her — obviously the culprit — well, I knew I had to have it. And it was a wonderful, slimy mess of a film. At the time, it hadn’t occurred to me to look into Simon’s filmography; instead, I went on my merry way (and probably discovered Tourist Trap).

During this time, while perusing those “bad movie” compilations on YouTube, I became aware of the existence of Pieces, courtesy of Linda Day George’s repeated and increasingly dramatic screaming of “bastard!” into the sky above her. Again, such a fraction of the overall film was enough for me to know it was something I had to have. And I did. I’ve owned Pieces on multiple formats, including Grindhouse Releasing’s recent and beautiful Blu-ray release. It’s one which receives a decent amount of playtime because of how fucking happy it makes me.

Which brings us to The Rift. 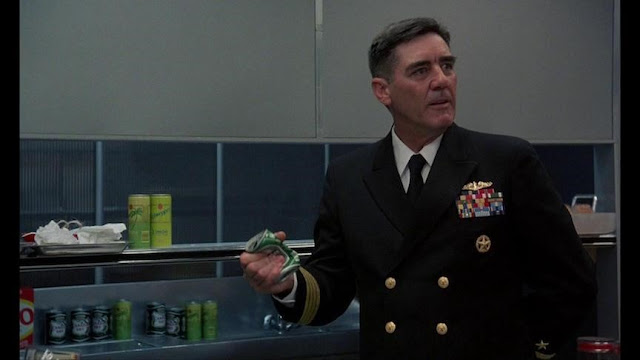 Released in 1990 as Endless Descent, The Rift was originally destined for theaters before it did an about-face and instead debuted on video after a very select theatrical release. The finished film is your best explanation of why. The Rift is goofy as hell, but somewhat disappointingly, not as goofy as Simon’s previous goofiness. Ultimately the film falls somewhere into a no-man’s land; not quite dumb enough to be as celebrated as Pieces or Slugs, but certainly not at all good enough to be accepted by both critics and mainstream audiences, The Rift is just kind of there and only occasionally entertaining for all the wrong reasons. (The death scene for “Skeets,” played by John Toles-Bey, is definitely one of the highlights. And don’t start yelling “hey, spoilers!” because this was an ’80s horror film and Toles-Bey is black and them’s the rules.)

As usual, R. Lee Ermey plays a rigid and gruff military man (how non-traditional!) but manages to not come off as poorly as everyone else — and the entire film around him. Simon’s tendency to have actors loop most of their dialogue in post-production hinders nearly every performance, giving it that awkwardness of which only joint Italian/Spanish and American productions were capable. Jack Scalia suffers the most, as every line he recites seems to be tinged with disbelief and near over-enjoyment. Ray Wise is given very little to do except stare intently at a computer screen, at least until the third act, in which he’s…well…given more to do. Where The Rift doesn’t disappoint is with its less than effective employment of practical effects. Shots of the submarine submerged are hilariously model-like, and so many heads get blown off either humans or sea creatures that one can’t help but smile (because one is very sick). 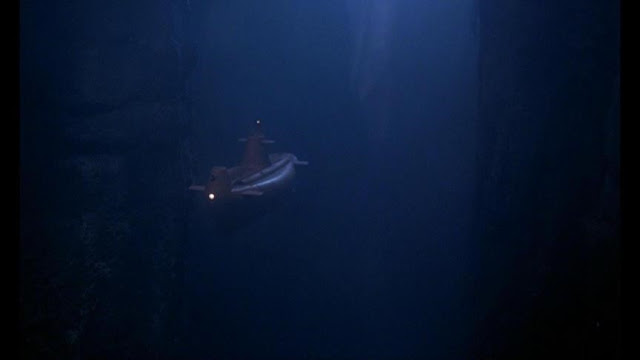 The Rift is every underwater ocean thriller that came before it, taking its cue mostly from ones not-so-memorable. Deep Star Six, Leviathan, mixed with aspects of better sci-fi classics The Thing, Alien, and The Abyss — that’s The Rift. Not as well directed as Slugs (seriously, some of Slugs is downright great!), and lacking the grindhouse nastiness of Pieces, The Rift is a very okay way to spend 82 minutes. It’s hard to say how much rewatchability it has, except for the good parts, and it’s certainly not one of J.P. Simon’s more celebrated titles, but hey, if it makes someone out there as happy as Pieces makes me, then I’m glad for them. Internet high-five.

Not at all a “good” film, but sadly, one that also doesn’t quite scratch that “so bad it’s good” itch like J.P. Simon’s more celebrated titles, The Rift has moments of cheese that nearly reach the heights of bad moviedom. Things to love: the terrible dialogue, awkward performances, do-it-yourself special effects, and obviously nice helping of bloody chunkiness. Things not to love: too-long scenes of people staring dramatically at radar and looking shocked, or half-baked marital distress straight out of The Abyss that’s given very little room to breathe. The Rift is what it is, and what it is ain't great. 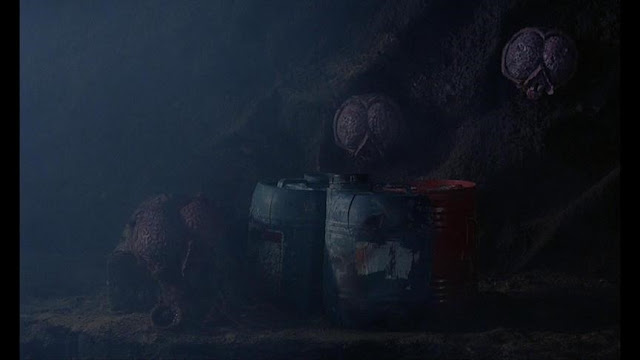 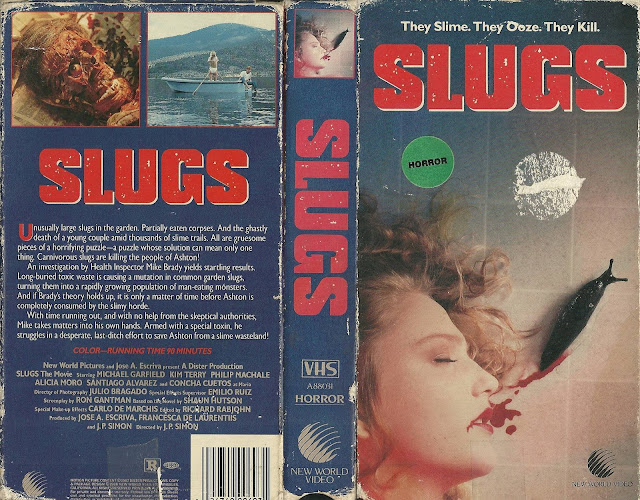 Never was a horror movie more deliciously cheesy than it was in the ’80s. Delicious, delicious cheese in the form of Slumber Party Massacre, Sleepaway Camp, and Pieces smashed the faces of film-goers everywhere — film-goers who wouldn’t know how good they had it until it was all over.

The ’80s were a time in which horror movies were allowed to be fun. They were filled with inconsequential characters whose first name you would be hard-pressed to remember as they ran from a killer with a drill, or from an animal/insect gone amok, or from what would turn out to be a 13-year-old hermaphrodite with a freaky face and a tiny dingle thing. Plots were allowed to be wildly ludicrous and it was OK to ask the audience that they suspend their disbelief, if only for a couple hours.

Sadly, this period of horror has come to an end, but it’s left in its wake numerous treasures, one of these being the greatest movie of all time to feature an army of slugs destroying the human race, asshole by asshole. 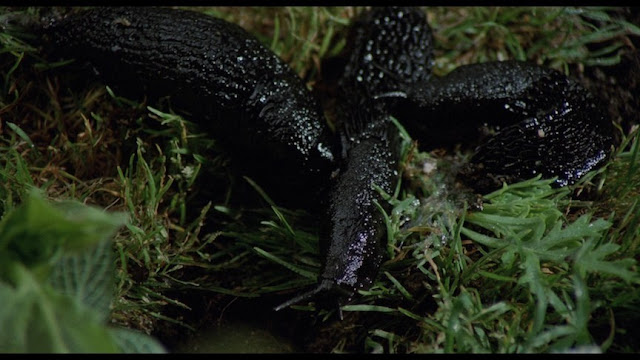 Slugs is brought to you by the Spanish (particularly J.P. Simon, director of Pieces, and all-around king of ’80s horror). In fact, its release title in Spain during its run was Muerte Viscosa, which translates to “Viscous Death” (haha). The genesis of this production certainly informs the final product — not environmentally so much as aesthetically. Amusingly referred to as the “United Nations” of killer animal movies in one of the audio commentaries included on this release, Slugs features a very diverse cast of different nationalities (most of whom who were dubbed into English, including one very not-British actor suddenly becoming very British).

These slugs first make their presence known by invading the filth-douched basement of Old Man Trash, which is filled with empty pizza boxes and other rubbish he couldn’t be bothered to, ya know, put in a garbage can. It’s this event which puts these slugs on the radar of the film’s main character and hero, hilariously named Mike Brady. Yes, the city health inspector and 1/9th of a Bunch of Brady’s will be the one in the Roy Scheider role as he tears across town trying to get officials to believe that they have a major shark slug problem on their hands. 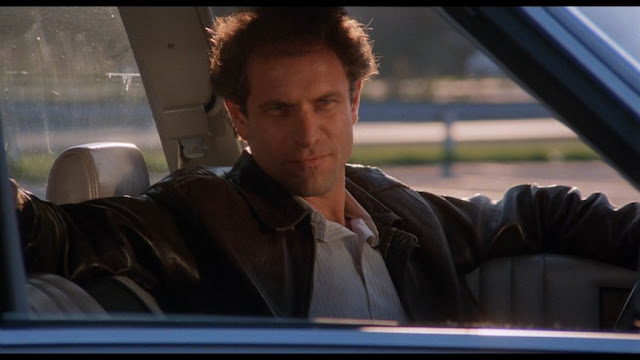 There’s so much to love and appreciate about Slugs, and some of it’s not even ironic. Sure, it’s easy to laugh at one character, Don, being married to someone who looks much older than him (called “the mother/wife” during another commentary track on this release), and it’s especially easy to guffaw when an old man puts his hand into a slug-infested glove and decides the only way to remove it is to chop off his entire goddamn hand with a hatchet. But in the midst of all this madness, it’s easy to lose sight of the fact that Slugs is actually kind of well made. With this being a product of the late ’80s, practical effects were the name of the game and handily brought the slugs to life, and their victims to death. The gore gags throughout Slugs are hilarious but undeniably effective. Eyeballs hang out of sockets, faces explode, limbs are hacked off — sounds fun, doesn’t it? Here’s the thing though: IT IS.

Adding to Slugs’ enjoyment is the baffling musical score. The themes beg comparison to the music often found in instructional videos on how to use the card catalogue, or rejected cues from The A-Team. Some themes even end in a triumphant crescendo that should complement an Indiana Jones-ish character jumping off a rocky cliff for the just-out-of-reach vine (or something equally exciting), but instead is used to complement a person getting out of a car, or running into a municipal building. Another theme actually utilizes the sad trombone/wahh-wahhhh-waahhhhhh a la bad jokes from ’50s sitcoms. 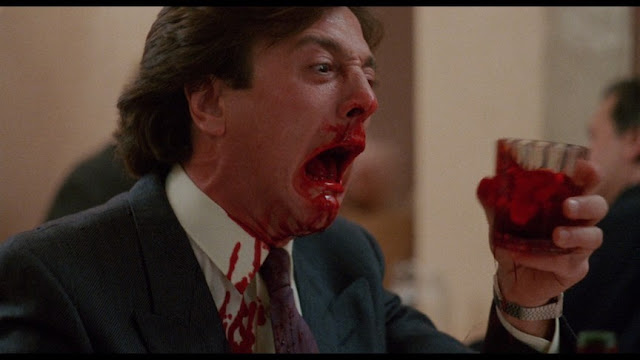 Like other films not just in Simon’s career, but also general Italian/Spanish and American joint productions from the ’80s and ’90s, there’s a certain hamfistedness to their plots and a definite, tangible awkwardness to their productions. Simon, for instance, was infamous for having nearly all his actors return during post-production to loop their lines, which offers every scene a subtle offkilterness. And this isn’t a case of Spanish actors’ dialogue being replaced by English-speaking voice-over artists. No, English-speaking actors spoke English during their scenes, but then came back to loop their dialogue again anyway — still in English. Obviously it made sense for Simon to result to this, or else he wouldn’t have done it; the why doesn’t matter — it’s the effect that does. And the effect is total joy.

There are different schools of thought as to what makes a bad horror film “so bad it’s good.” Some people claim to watch Uwe Boll films over and over and laugh with glee, which makes zero sense to me, considering his stuff is basically bottled pain. And that Sharknado nonsense, forget it. That’s not fun. Slugs is fun. Do you know why Slugs is fun? Because Slugs is trying. It’s the ones that try, but still fail spectacularly, that bring about the most joy. That’s really the takeaway: you can’t manufacture bad horror without purposely descending into parody, in the same way you can’t set out to produce a film you know will achieve cult status. You — the royal you, filmmakers everywhere — don’t decide how audiences will react to your film, ironically or otherwise, and you don’t decide if audiences — even a small portion of them (read: cult following) — will love and remember your film for decades after you’ve made it. 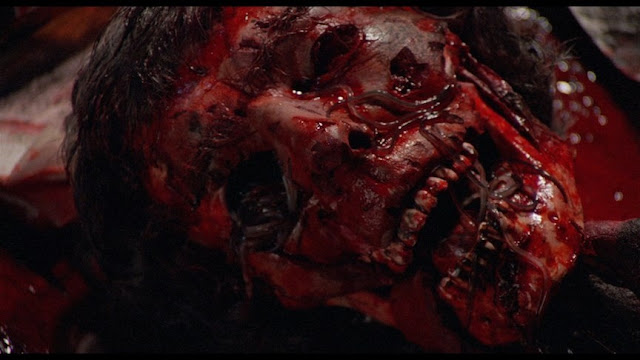 Slugs is trying. Slugs just wants to be loved. And it will crawl right down your goddamn mouth to prove it. 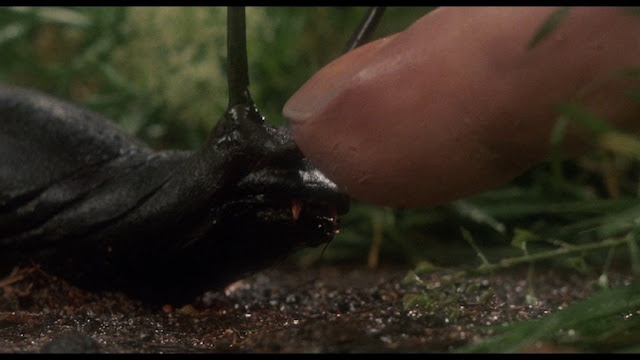