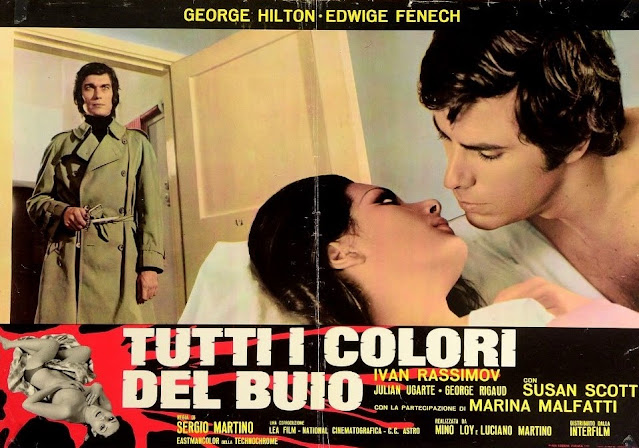 The word giallo immediately brings to mind the names of horror stalwart directors Mario Bava and Dario Argento, the former who gave birth to the popular European sub-genre movement during the late 1960s, and the latter who took what Bava had done and ran with it. Argento turned the giallo up to eleven with more sexuality and more gruesome killings, but also more experimental camera techniques and more dreamlike atmosphere. Many, many other directors soon followed suit, eager to leave their own mark on the sub-genre, and each going about it in many different ways. Some vied for artistic, some vied for pulpy thrills (which would be mirrored by the slasher movement in the U.S. following the release of John Carpenter’s Halloween). Soon, the giallo, whose etymology is traced back to yellow-covered pulp fiction novels from the early 20th century, would be applied to many different concepts: straight-up murder mystery, psychological horror, supernatural slice-and-dice, or a combination of the three.  (They sometimes shared their elements with another non-horror sub-genre known as poliziotteschi – think Dirty Harry reimagined as an Italian production, but with gorier killings.)

Director Sergio Martino enjoyed a career every bit as prolific as the filmmakers named above (which includes titles like Torso and The Case of The Scorpion’s Tail, along with a fair number of sex comedies), but he never managed to find the same kind of mainstream success as his contemporaries. Ironic, given that his 1970 film All the Colors of the Dark is considered to be a quintessential giallo and clearly inspired Argento once it came time to helm his masterpiece, Suspiria.

Starring the unrealistically beautiful Edwige Fenech, All the Colors of the Dark is about a woman named Jane, possibly suffering a psychological breakdown, who believes that a mysterious blue-eyed man in a trench coat is stalking her…with a dagger. Naturally, as the genre demands, no one believes her, and those in her life instead offer armchair analysis and advice, believing it to be a figment of her imagination. Her boyfriend, Richard (George Hilton), tells her to take vitamins; her sister, Barbara (Susan Scott), suggests therapy; and her neighbor, Mary (Marina Malfatti), suggests the most outlandish cure of all: a black magic ceremony to purge her of her fears. Jane tries each one, finding success in none, but after taking part in a black mass, things really go south.

From its opening frame, Martino is quick to inject some nightmarish (literally) imagery into what so far had been a straightforward sub-genre dedicated to murder mysteries. The opening moments present something not seen in gialli up to that point, and that same sense of unease carries through to the entire film, leaving you to wonder just how much trust you can put in Jane’s eyes, or if she’s your classic unreliable narrator. There are just enough fantastic elements that help the film and Jane’s frenzied journey feel just the least bit surreal, often making you question if what she sees is for real, or if the double-whammy of her mother’s murder when Jane was young, and Jane losing her unborn baby in a car accident, has warped her mind. And given that it’s right there in the title, Martino plays around with colors; in a pre-Shyamalan show of sneakiness, Martino hides blue – the same shade as the mystery man’s eyes – in plain sight, subtly suggesting that the person wearing that blue sweater or driving that blue car is not to be trusted.

All the Colors of the Dark has long been considered essential giallo, and I won’t disagree. Don’t miss it.

Email ThisBlogThis!Share to TwitterShare to FacebookShare to Pinterest
Labels: all the colors of the dark, giallo, italian horror, sergio martino 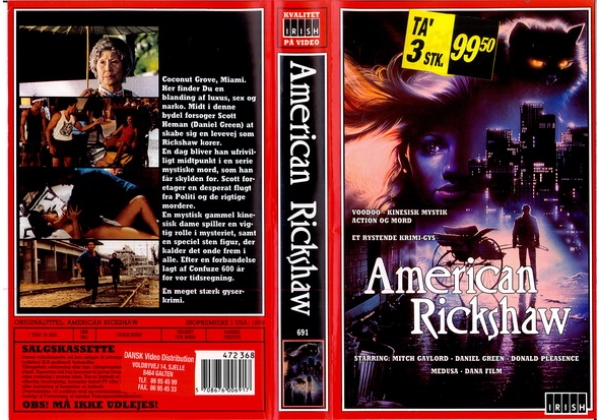 During the finale of American Rickshaw, which takes place in a television studio, a producer in the control room looks out on the events unfolding on the stage – where Donald Pleasence’s Reverend Mortom is snorting uncontrollably like a pig and the stage’s television screens at his back are showing a hijacked transmission of a youthful Chinese woman gleefully taking it all in – and then looks to his team in pure dismay as he demands, “Will somebody tell me what’s going on?”
That right there sums up the experience of watching American Rickshaw.

Released in 1989, and also known as American Tiger (a title that makes a bit more sense), American Rickshaw was directed by cult Italian director Sergio Martino, who, among many other films, had made the classic gialli All The Colors Of The Dark and The Strange Vice Of Mrs. Wardh. Following the announcement of American Rickshaw making its Blu-ray debut some time ago, I was aware of this. I recognized the name and thought, in my unending quest to see every Italian curiosity, “Well now I have to see this.” 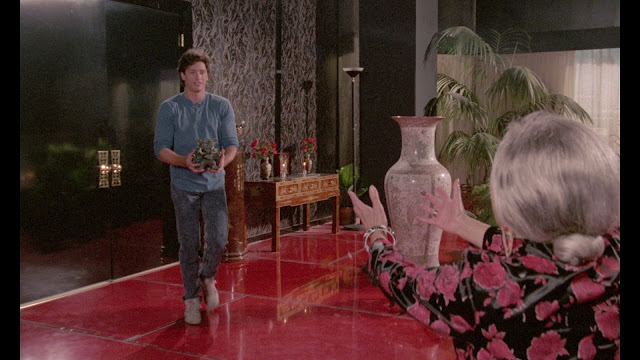 Over the following months, however, I’d forgotten about Martino’s connection, and when my screener of American Rickshaw arrived, I’d tentatively given the disc a spin, assuming it was a random title made by a random American director with no real recognition. When the credits rolled, I switched to the special features and saw the name of Sergio Martino, and that rediscovered revelation made what I had just watched even stranger.

There’s one word to describe American Rickshaw, and it’s this: baffling. From the opening moments where an elderly Chinese woman (Michi Kobi) rests on a bench in the thick of a rainstorm, and random American rickshaw driver (Mitch Gaylord) stops to pick her up, and as she stares at him with a smile reserved only for lovers, you are already baffled. Who is this woman? Does she know this young man? Does he know her? Fucking rickshaws in Miami?

And you’re off and running, and not even five minutes in! 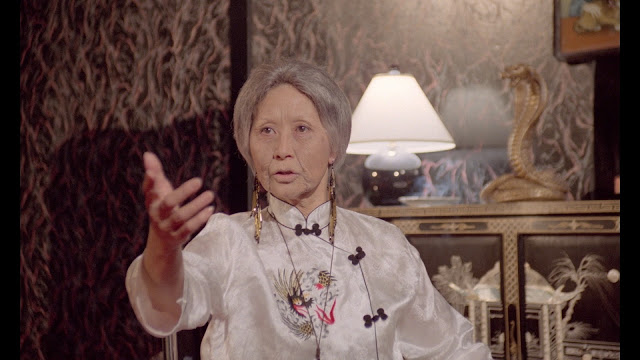 American Rickshaw is a complete and total mystery – not just from understanding the movie’s living-thing plot, but also trying to figure out how the hell this thing got made in the first place. Because of its try-anything kitchen-sink approach, American Rickshaw seems like ideal double-feature fodder alongside John Carpenter’s Big Trouble In Little China – not just because of the superficial Chinese connection, or that it’s a weird, weird twist on the Indiana Jones format, but because it’s a mishmash of half-a-dozen different genres with none of them taking centerstage and allowing a viewer to say, “Oh, well, it’s primarily X.” American Rickshaw has it all: horror, mystical fantasy, intrigue, action, noir, and lastly, unlike Big Trouble In Little China, not a single goddamn joke. And unlike Big Trouble In Little China, where you at least had recognizable faces like Kurt Russell, Kim Cattrall, and James Hong taking you by the hand and leading you down into the depths of a studio release, the only person you’ve ever heard of in American Rickshaw is, ironically, another Carpenter connection, Donald Pleasence…but, if you’ve seen a good portion of his output from the mid-‘80s and up until his death in 1995, that doesn’t necessarily mean you’re safe.

At this point in his career, even though the Halloween series was proving to be his mainstream bread and butter, Pleasence said yes to everything that came his way. In American Rickshaw, he plays another Sam – this one a television evangelist doing his usual amount of spitting, proselytizing, and money grubbing. It somewhat recalls his role as The President in Escape From New York, only this time Pleasence really goes for it, embracing the curiosities of playing a villainous caricature falsely championing the word of God to enhance his personal worth. He relishes in playing a scumbag, and he’s very good. 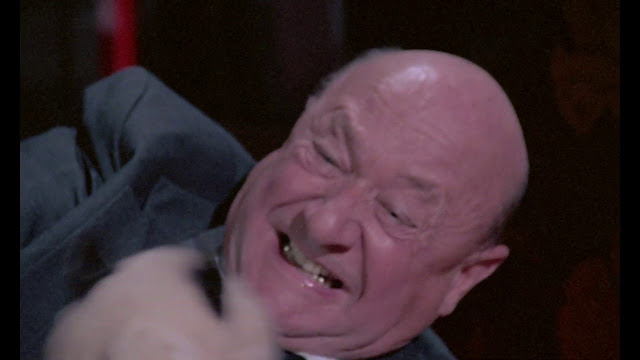 Native Italian productions have their own feel, but so do Italian productions that are filmed in America using American crews. The aloofness and clumsiness of the Italian sensibility is still present, only it’s been filtered through the American aesthetic, presenting the final product as glossy, bright, and very Hollywoody. Umberto Lenzi’s Welcome To Spring Break aka Nightmare Beach, a slasher also set and filmed in Florida, is a perfect example. Italian films play by their own rules, the biggest being: it doesn’t matter if the story is illogical. The story might not even make sense to the filmmakers, and as Dario Argento himself has said in the past, it’s less about the story making sense and more about your immersion in the story itself, and the collection of scenes and images that connect them all together. There’s a beginning, a middle, and an end; there’s a hero, a villain, and a conflict; there’s danger, terror, violence, and sexytime. To quote Pleasence’s Dr. Sam Loomis, what more do you need?

American Rickshaw and Luciano Onetti’s Abrakadabra, the third in a kinda-trilogy of very stylish and faithfully rendered giallomages that began with Sonno Profondo and Francesca, are the debut releases from Cauldron Films. They are a good sign of things to come from the label; I know for sure I’m eager to see what comes next. 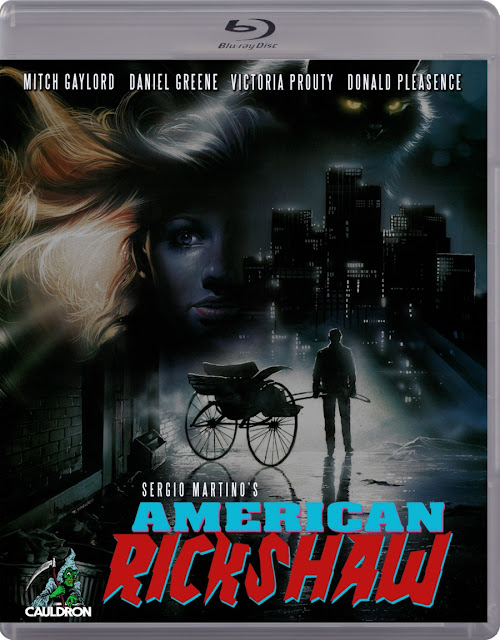 American Rickshaw and Abrakadabra are now available through Diabolik DVD.
Posted by TEOS at 1:42 PM No comments: