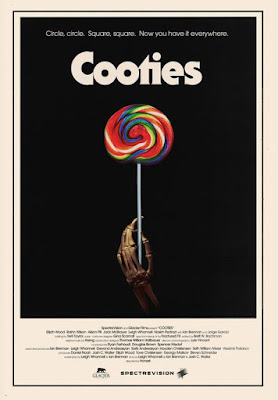 Cooties is one of those films that, as you're watching it, you almost start to dislike just because you want it to be better than it is. And that's not to say Cooties isn't good, or very funny, because it is, but it's because the film was nearly there - immortal status - that it starts to suffer for it. The cast have remarkable chemistry, each providing a dose of their own real personalities (the reason they were cast in the first place), with Rainn Wilson's Wade playing an even more exaggerated version of Dwight from The Office, while Elijah Wood gets to show off his rarely seen comedic chops beyond Wilfred, where he generally plays the straight man, anyway. (Him telling his students to read pages from his unpublished manuscript as he sits down, closes his eyes, and places his hands over his smiling mouth, as if he wants to take it all in and bask in the inevitable appreciation of his elementary school students, is unexpectedly hilarious.)

Much like any horror-comedy, or any comedy in general, some jokes land and some don't, but the ones that do are frequently funny. Co-writer Leigh Whannell (screenwriter for the Saw and Insidious series) absolutely steals the show as Doug, the socially awkward and possibly serial-killing biology teacher who rattles off all the film's best lines (especially during the Breakfast Club-ish confessional scene). 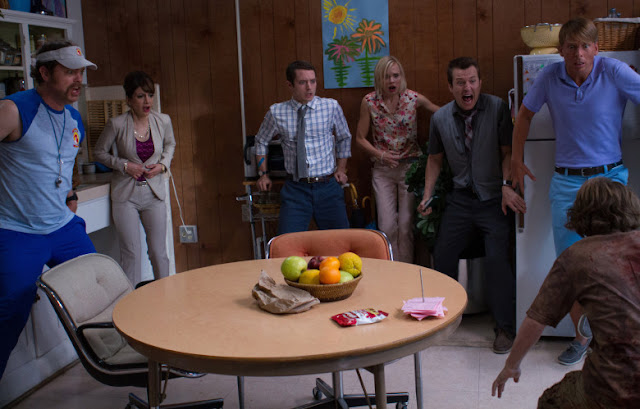 Directors Jonathan Milott and Cary Murnion, in the midst of all the carnage, manage to show off some pretty striking directorial flare, most notably in the slow-motion sequence somewhat reminiscent of another zombie opus, World War Z, in which the audience gets a ground-zero look at how quickly the zombie virus can spread, when a zombified student tears across the playground scratching deep wounds into the arms of other students. The surreal but savage and brutal construction of this sequence, despite it taking place in a cheeky black comedy, wouldn't feel out of place in a more traditional horror film. The tremendous musical score by Bulgarian composer Kreng marries bits of John Carpenter to traditional orchestra and sounds fantastic.

Where the film fumbles is with its use of Jorge Garcia as an acid-dropping crossing guard who spends most of the film isolated in a van hallucinating from the drugs he's taken. While this does mostly come off as entertaining, it also feels like it belongs entirely to its own story; it could have been fully excised without affecting the film, even improving its pace. Cooties also falls victim to a Return of the King-ish too many endings. Once the film embarks on a change of location during the third act (and following a dispatching of a certain character), Cooties feels like it's just around the corner from ending, but when it insists on continuing, it starts to feel dangerously close like overstaying its welcome. 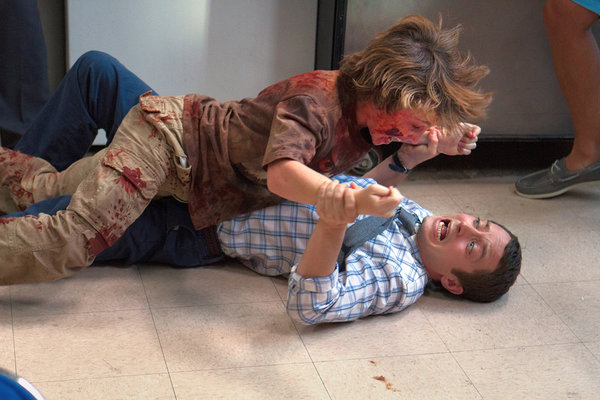 Not since Troma's terrible Beware: Children at Play has a film so unashamedly both put children in danger and made them the adversaries, and thankfully Cooties, despite its very recognizable cast and mainstream release, doesn't relent when it comes to bloodletting and bodily carnage. The nice thing about Cooties is that, unlike Beware: Children at Play (or anything from Troma), you get all the mayhem with none of the desire to take an immediate shower.

Though the zombie comedy thing has been done to death, Cooties proves that there's still life in the concept yet. It boasts an engaging and amusing story, more good jokes than bad, and a cast whose chemistry is infectious makes Cooties worth catching. 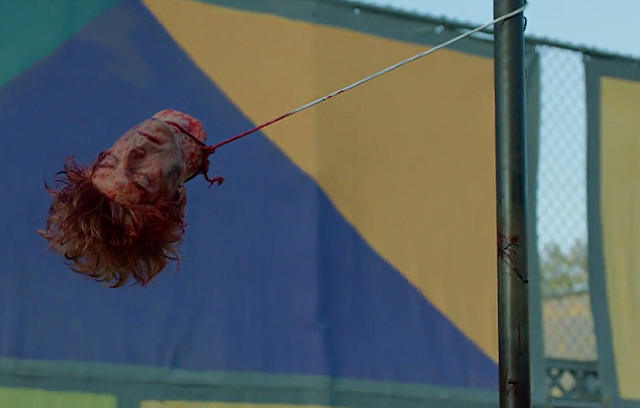 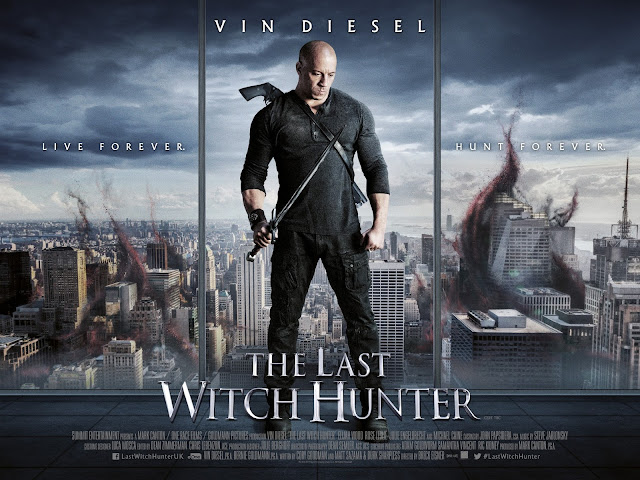 If nothing else, give The Last Witch Hunter credit for one thing: it doesn't attempt, yet again, to concoct a period horror piece draped in drippy surroundings, Viking beards, and really heavy-handed themes about God and faith (which were a lot more relevant back then, being that there were only about thirty people on the entire planet, and 28 of them believed in God). Filmmaker Christopher Smith has already had the first and ultimate word on the subject with his excellent and criminally overlooked Black Death, but then a major studio felt we needed a cheap imitation, and so they made their own version with Nicolas Cage. (It was Season of the Witch. It sucked.) Though The Last Witch Hunter may lack in most areas, at least the writers and director Breck Eisner had the idea to fast-forward the plot after its plague-era opening into modern times. It's a silly concept, made sillier by seeing how it actually plays out, but if a film is going to be mediocre, at least it can do so in the streets of New York and not slimy caves or muddy swamps where the audience has no choice but to be depressed and underwhelmed.

The Last Witch Hunter plays out in a very post-Supernatural world, making sure to include small batches of people working toward the cause of eradicating a supernatural threat (in this case, witches), along with the idea that witches just kind of hang out with each other in dusty New York lofts, so taking them out in large chunks at a time is pretty easy. Runes, sigils, finely dressed monster hunters, and a horde of CGI is on-hand to invoke the endless debacle of the Winchester Brothers, only this time it's not a decade-running horror series that actually started off excellently and then began running out of ideas halfway through, but a bloated feature film that pretty much didn't know what to do right from the start. In a film called The Last Witch Hunter, the titular hero hunts exactly one witch...twice. He may be the last, but he certainly ain't the best. 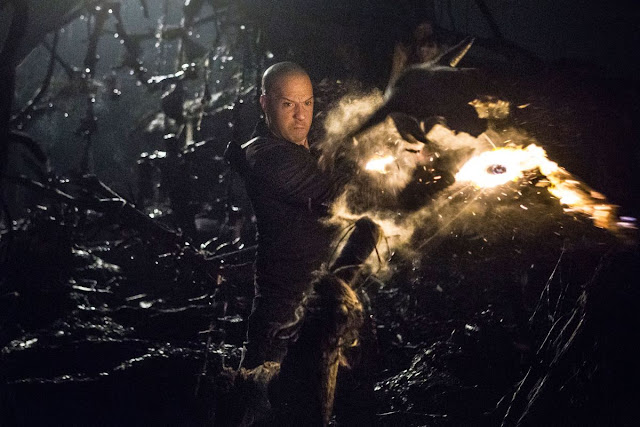 Vin Diesel isn't an actor so much as he is a performer. He is frequently cast because studios and/or directors want their audience to just know what kind of experience to anticipate before they ever see a single trailer or production still. Diesel, who hasn't given anything resembling a performance since 2006's Find Me Guilty, has skirted by all this time on his admittedly physically intimidating appearance despite the fact that he kinda/sorta looks like a giant cartoon baby -- a giant cartoon baby that, for sure, could rip my head off and throw it behind his over-sized crib. But intimidation can only get you so far. Predictable and similar critiques have been thrown at guys like Schwarzenegger and Van Damme over the years, but at least they had the foresight to embrace the why of their popularity and show signs of life every so often. Lack of acting abilities could be reasonably counteracted by charisma. Vin Diesel has not gotten this memo. He recites his dialogue like an idling engine, and if his face moves, that means he's trying to emote. He's infinitely more interested in twirling his head-smashing weapons behind him as they make that whoosh sound so his prey knows he's really, really good at head-smashing. Fill the screen with all the bodily mayhem and CGI you want, but if your hero is boring, then your movie is boring. That's movie science.

The supporting cast of Michael Caine (I'm still trying to figure out that one), Elijah Wood (Maniac), and the beautiful Rose Leslie (Game of Thrones; last night's dreams) threaten to offer much needed variety to the plot, but everyone's roles unfold with such telegraphed predictability that there's nothing left for them to do besides go through the motions: Caine looks sad and old, and says things sadly and oldly; Wood looks wide-eyed, precocious, and dorky; and Rose Leslie, well... The Last Witch Hunter's running time would've been better spent with her reading aloud from the script while every so often pushing a stray hair behind her ear and looking directly into the camera -- all while knowing she was looking only at me. 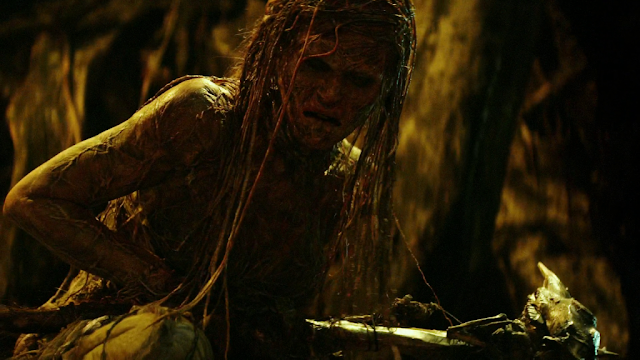 Director Breck Eisner hasn't exactly hit any of his films out of the park, as he's released one slice of studio tentpole escapism after another that have resulted neither in critical favoring nor box office success (although I unashamedly enjoy his redux of The Crazies). While he is capable of some decent directorial flare (again, I'm talking about The Crazies), The Last Witch Hunter drowns in so much CGI that it's hard to see what's going on around it. The buzzing flies and the smoky vapors and the screaming witch faces and the fire and the oh my lord it's all just so exhausting. The combination of Vin Diesel, Breck Eisner, and PG-13 monster violence was likely never going to result in a modern classic, but it could've at least made for 100 minutes of reasonable entertainment that, when it was over, didn't make you think, "I don't even remember what happened." Maybe it was black magic.