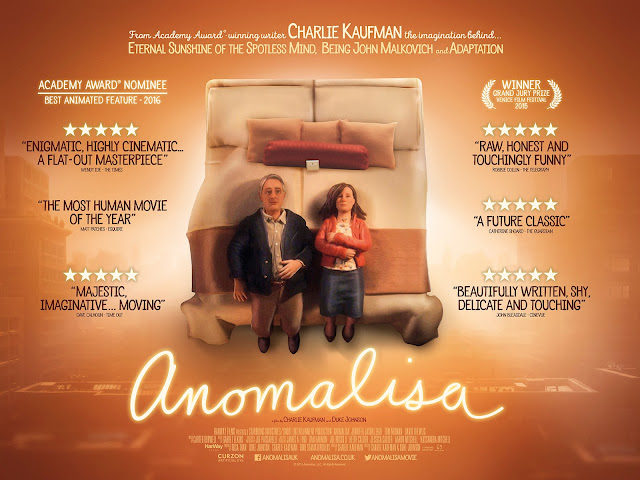 Every single film so far in writer/director Charlie Kaufman's oeuvre has been about the longing between human beings, and the inevitable heartache and/or failure to which it leads. Anomalisa may have ditched those same humans in favor of an array of handmade puppets, but the humanity of the piece is still hugely present. Puppets aside, and to parrot some of the more on-the-nose critical notices that Anomalisa has received, this really is the most human of Kaufman's films so far.

Written and co-directed alongside Duke Johnson, Anomalisa is impressive on every single imaginable level--from the immediately obvious technical to the poignancy that slowly accumulates as we witness our lead character, Michael Stone, encounter a sea of sameness: the same faces, the same voices, the same disconnect. That these characters are brought to life with swappable faces isn't just some gimmick--it's essential to the story both thematically as well as logistically. Originally a "sound" play performed live for audiences during an extremely rare two-night event, that Anomalisa has been reimagined utilizing stop-motion animation and handmade puppets sounds like something doomed for failure. But as Kaufman has proven with his intimidating imagination time and time again, he's taken the most absurd of concepts and turned it into something oddly compelling and surprisingly emotional.

Perhaps Kaufman could have fashioned a live-action screenplay and used actual human actors on screen. Perhaps Tom Noonan's face could have been super-imposed on every single secondary character, and his voice dubbed over every single secondary line of dialogue. And as strange as it sounds, Kaufman could have pulled this off--with the same amount of sincerity balanced with absurdity. (If he did it with puppets, than anything is possible.) But it also would have been a page out of his Being John Malkovich (also about puppets, in a sense), and Kaufman doesn't like to do the same thing twice in the same way he doesn't like to make the same film twice, common themes notwithstanding.

As impressive as the puppetry is, what brings them to life is the phenomenal (and extremely limited) voice cast. David Thewlis presents Michael as sad and alone right off the bat, even when he speaks on the phone with his oppressed wife and indifferent son. Jennifer Jason Leigh (a refreshing reminder of her talents following her agonizing turn in Tarantino's insufferable western The Hateful Eight) plays coy and shy remarkably well, imbuing Lisa with believable mental scars as well as physical ones. But the performance of the hour belongs to Tom Noonan, whose calm, monotone voice is somehow simultaneously anonymous and instantly recognizable. It was an utter stroke of genius to cast him as "Everyone Else," being that his voice, with little manipulation on his part, easily suits the array of characters--male and female, young and old--that Michael encounters during his stay at the Fregoli Hotel. (Wikipedia describes "Fregoli syndrome" as "the delusional belief that different people are in fact a single person who is in disguise.") Noonan reads most of his lines with utter calm, easily garnering laughs during the more ridiculous dialogue, but also achieves laughs just as worthy during, say, the scene where Michael overhears a bickering newly wed couple swapping profanities that he passes in the hotel halls. Captured in the ideal way, all three voice actors recorded their lines during a reading of the script, each existing in the other's space to feed off the energy from their performances. This wasn't a case of their lines being recorded separately and pasted together later, and this helps to convey the relationships being established--or destroyed--during Anomalisa's running time.

It's easy to see that many potential viewers will write off Anomalisa before seeing a single frame of it simply because of the way it was made. But those potential viewers with small minds don't deserve to experience something so beautiful. Let it remain a secret for those who want and desire something far more emotional and significant than what can be found right now at the local multiplex. Anomalisa is a gorgeous film with a heartbreaking message at its core and just might be Charlie Kaufman's most personal and revealing film yet.

If you're even a casual fan of Charlie Kaufman (if such a thing exists--you either love him or hate him), Anomalisa is the next step forward and upward for the acclaimed writer/director. It's a revealing look at the humankind disconnect, our at-times frustrating inability to communicate who we really are, brought to life by things that have the look of man, but not the soulfulness. For its ingenuity, innovation, and humanity, Anomalisa gets the highest recommendation.