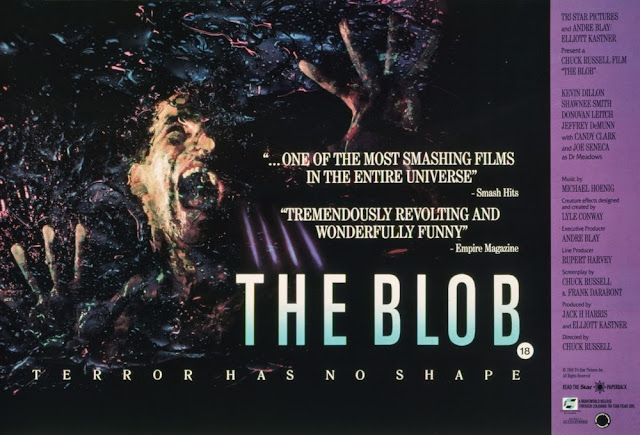 Ah, The Blob. A film that harkens back to that magical time in horror history when films were remade because someone had a good idea and a good approach, instead of saying, "Well, it's been five years. Let's remake it again."

Long a childhood favorite of mine, for not only terrifying me to death and keeping me away from all kinds of drains for days, but also for introducing me to my first ever horror crush, Shawnee Smith, The Blob works as well now as it did then. Normally the things that would hold back a lesser picture, including the dated (but still perfectly acceptable) special effects and the hilarious fashions, The Blob has always been good enough to surpass those shortcomings caused by the passing of time and still present a fun, nasty, gooey, and ultimately harmless good time. 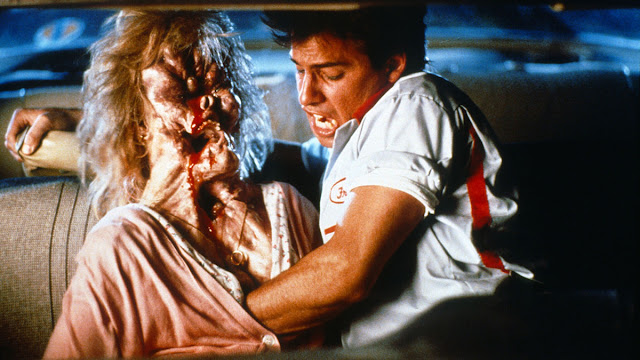 You all know this one: a meteor carrying a strange jell-o substance from space (or was it?) crash lands on Planet Earth and begins gooing up its inhabitants. Only one man it seems can stop them, even though dozens try. That man is the hilariously-haired Kevin Dillon and the still-adorable Shawnee Smith (call me!).

Because of the time in which it was made, The Blob relies solely on practical and in-camera effects, only resorting to opticals for a couple scenes. (They've been trying to get a new version of The Blob off the ground for years, and once it arrives, I can only imagine the absurd amount of CGI that will be sliming across silver screens everywhere.) To tell someone who's never seen it that a space-foreign (or is it???) slime begins to suck people into itself, where it strips flesh from their bones and causes the blob to increase in size and oh by the way it's actually scary at times—the end of that conversation doesn't bode well. Because of its concept, and because it’s an ‘80s flick, it’s easy to think that The Blob is a light, silly, and inconsequential good time, but it actually has a lot in common with John Carpenter’s The Thing, in that it goes for the throat in unexpected ways and highlights some pretty grisly practical effects. The Blob not only manages to work just with its concept, but in spite of it; it also has no qualms in breaking some serious horror-film taboos. It eats a kid! A kid! Take that, kid! 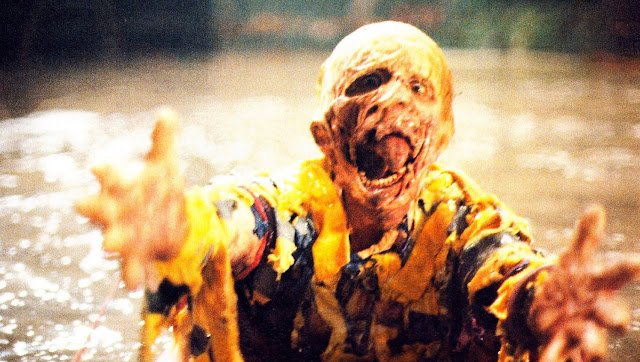 A wonderful cast of character actors fill the background, including a regular of Frank Darabont (co-writer on The Blob) named Jeffrey DeMunn, who appeared in both The Shawshank Redemption as the lawyer who sends Andy Dufresne to his fate, and one of the guards in The Green Mile. Oh, he also played Dale in The Walking Dead. Perhaps you've heard of it. And perhaps you knew he'd been acting for thirty years before he played a filthy man in a bucket hat for which he'll now always be known (on Twitter). (Bitter hipster fan-boy rant over.)

The Blob is a classic. It's rare to say that a remake of something is a classic, and also bests the original. But this edition of The Blob is, and has.