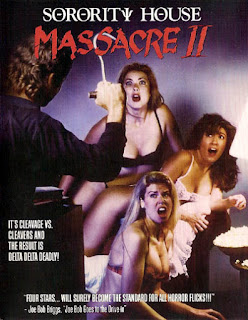 Directed by the esteemed Jim Wynorski (Chopping Mall, The Devil Wears Nada), Sorority House Massacre 2 is filled with all the breasts, blood, and big hair that the late 80s had to offer.

Stop me if you’ve heard this one before: a group of raunchy teen girls settle into an old, abandoned house, despite the murderous events that took place there in the past. One by one, the girls begin to die off in painful ways. In between, there is a lot of giggling, drinking, and random undressing.

Wynorski at this point already knew what kind of movie he was making. Though this was Sorority House Massacre 2, it was, in essence, Slumber Party Massacre 5. The tropes for these films were already so set in stone that while Wynorski may have placed an obvious joke here and there, for the most part he played it very straight. It was a wise choice that adds to the movie’s charm. “We know this is bad, but we’re pretending it’s not,” etc. Additionally, while its title clearly indicates it is a direct sequel to the ho-hum Sorority House Massacre, it’s more of a ret-conned sequel to The Slumber Party Massacre. You see, footage from the last act of Slumber Party is shown, but all of its characters are redefined not as high school friends and their random basketball coach, but rather two teen sisters and their mother—all of whom are inexplicably murdered by their father/husband, Clive Hockstatter (the first movie’s driller killer).

I’ve seen footage from a previous film used in its sequel to fill in the gaps.

I’ve even seen a plethora of this footage used to pad out its sequel’s running time.

But I can honestly say I’ve never seen footage from a movie that was entirely retconned by onscreen narration. This is like making a sequel to Ferris Buehler’s Day Off, but showing footage from Batman, as someone off screen says, “And then Ferris punched the Joker off a building, and the Joker’s laughing bag laughed at Pat Hingle.”

It doesn’t matter, really. Let’s just move on and meet our girls.

Linda: She’s British and kind of a scaredy-cat, and is the closest thing we have to a final girl.

Jessica: She wears skimpy outfits, but really shouldn’t, as every inch of her could be described as plentiful. Extra skin leaks out from between her midriff top and high jean shorts. She has a boyfriend who looks like her father.

Janey: She’s hot in that Betty Page sort of way and I’m pretty sure she’s the one who causes all this trouble in the first place with that stupid Ouija Board.

Suzie: She has big hair and even bigger panties, but in general she is quite short. Watch as our characters talk down to her throughout the movie…literally!

Kimmy: Whichever girl is the last one I haven’t mentioned yet. She’s mousy and kind of forgettable. She looks like Suzie, but is taller. She may or may not exist.

The girls meet outside the house they have bought—it’s to be the new headquarters of whatever sorority they’re in.

“When are the movers coming?” someone asks.

“6 a.m. in the morning,” Jessica answers, repeating and reiterating herself.

While unpacking, they meet Orville Ketchum, their new next-door neighbor. He is the most unsightly man anyone has ever seen, and the movie goes far out of its way to make you think he is the killer. At this point, I honestly can’t say if it was purposely over the top or accidentally so, but it doesn’t matter, because either way is fine with me.

He goes on to explain that he’s been keeping an eye on the place for all the time it’s been abandoned—sort of a glorified landlord.

“So all you girls are going to be living here? Guess you’ll be needing this,” he says and reaches directly inside his pants and fumbles around his cock area. As much as I don’t want to encourage the movie, I laugh anyway.

Instead of his fat man cock, he removes a key. “For the basement,” he says, grinning.

The minute he leaves the girls begin to undress, one at a time, and we see pretty much every pair of potential breasts—even the main girl. (Thanks Jim.) Once the clothes come off and the nighties go on, the Ouija Board makes its appearance.

“Put your fingers on the divider,” someone orders.

“No one puts their finger in MY divider,” someone says back, which is weird, because all of these girls are clearly whores.

Suddenly the Ouija Board flies across the room!

The girls are suitably creeped by this until someone suggests that it was static electricity. I guess they believe it, because one of the girls begins to give another a massage. (Thanks Jim.) It doesn’t last, however, as they begin to fight over a boy. The girls separate as really bad music you’d hear in a Halloween store – the one with the robotic voices impossibly changing octaves – fills the screen with trademarked terror.

Janey grabs a bottle of tequila, sucks on the spout, and is then killed by a sloth hook. And in the lower right hand corner of the screen, check out the obvious hand that squeezes a bottle of fake blood all over the wall. (Thanks Jim.)

The girls split up to try to find Janey within the apparent labyrinth of their new home.

Susie goes up to the attic and steps into a bear trap (?) before being sloth-hooked.

Oh no, what will happen next?

Tits, that’s what. I guess we’ve spent too much time without some tits, so we cut immediately to a strip club to take a gander at a few. Look, there’s some. Oh, there’s some more. (Thanks Jim.)

Our two cops I forgot to introduce – Lt. Block and Sgt. Shawlee – sit at a booth and literally clap after one of the dancers finishes her act, which I'm pretty sure is not usual strip club decorum. (Also, Sgt. Shawlee is a she.) As the next stripper begins her act, Lt. Block looks pleased to be exactly where he’s at.

A stripper comes over to their table and sits down. She is Candace Hockstatter, one of the sisters who survived her father’s random and denim-jacketed massacre. She tells the police that their old neighbor, Orville Ketchum, always gave the family the creeps, and she believed he had something to do with the original murders.

No time for any more exposition, though, because we’re back at the sorority house as more girls get murdered. As someone gets a metal point shoved into her person, Linda screams for way too long, most likely waiting for the prop guy to shoot a load of fake blood into her mouth.

“Oh my god, our clothes!” screams one of the girls. “They’re still upstairs!”

Deciding that living > clothes, the girls fling open the door and run outside just long enough to get nice and wet, making all of their clothes see-through. (Thanks Jim.) Then they see Orville Ketchum standing outside in the street, so they run back inside.

“I knew he wasn’t firing on all his cylinders!” someone shouts, not quite getting the expression right.


The girls run up the stairs to the attic and the camera makes it a point to linger on each of their asses as they do so. (Thanks Jim.)

Eventually Linda finds herself in the basement with Jessica, who it turns out IS the killer because she had gotten possessed by the spirit of Clive Hockstatter while the girls fucked around with that darn Ouija Board.

Linda screams and runs from the room, her breasts swaying hypnotically through her thin t-shirt.

Linda looks terrified as I grin.

Though he has knives sticking out of his body, he lunges into the room and fights Jessica, but he gets stabbed AGAIN and thrown to the opposite wall. Linda takes this time to stab Jessica in her thick body, thus ending the terror.

The cops rush in just in time to be useless, as one of them asks, “Wasn’t this the old Hockstatter place?”

Linda looks all googley-eyed and creepy, since I guess she’s possessed now, and then Orville Ketchum wakes up from death and steals a gun to blow her to smithereens. Then the cops unload all their bullets into the fat hero, who STILL survives.

This was a fun movie. My favorite part was all the shameless nudity and killing.