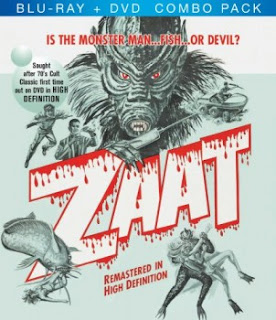 One day, a man named Kurt said "fuck humans" and turned himself into a giant, moss-covered fish monster. After doing so, he proceeded to swim around the Florida Everglades, murder, chase cute blonde girls in teeny bikinis, and be an all-around pain-in-the-fish. A special arm of law enforcement called INPIT (Inter-Nation Phenomena Investigation Team) is dispatched to the area to investigate the multiple slayings-by-fish that have occurred. This team consists of Agent Walker Stevens (the dude) and Agent Martha Walsh (the chick). The chick likes the dude, but the dude's obsession AND his near-brushes with death caused by said obsession cause the two non-lovers certain levels of stress. See, the chick loves the dude, and the dude just may love the chick, but the fish man of Florida often gets in the way of the two beginning a romantic courtship. (Somewhere, Chris Carter, creator of the ever-enduring "X-Files," is sweating this new DVD/Bluray release of ZAAT.) When Fish Monster isn't killing, or the agents aren't necking, there's a random dude – a prototype for the original hippie – singing entire acoustic tunes directly at the camera. It all, in the end, doesn't amount to much, and I'm sure in some alternate universe, my copy of ZAAT is still playing.
We'll just get quickly to the point: ZAAT is a pretty terrible movie. There's a reason that it's not only been mocked by our favorite human/robot team combination on an episode of "Mystery Science Theater 3000," but also enjoys a current user rating of 1.7 out of 10 on IMDB. The movie is just atrocious, and anyone who has visited this blog in more than just passing knows that I love a good train wreck—the more incompetent, the better. All a bad movie needs for me to like it is this: take your premise seriously, even if your audience doesn't, and do not be boring. That's it. ZAAT, while taking its premise seriously (and vetting a serious cause), was mercilessly boring. That I even made it through the thing without falling unconscious is some kind of half-miracle, being that I once famously fell asleep in theaters during the plane crash scene in Castway—a scene filled with nonstop carnage and jarring noise in a movie that I truly loved. 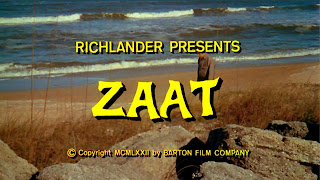 But the tedium of ZAAT is not the reason I chose to forgo putting this review under my Shitty Flicks banner. No, I am choosing to highlight this movie on its own because of one important element: this completely undeserved, and frankly, pretty damn good little home video release.
ZAAT's history of home video releases is spotty at best. There are claims that ZAAT was released once prior to DVD in various titles, and not just in the aforementioned MST3K's Volume 17 in which the film was duly ripped apart. However, a quick search for "ZAAT" does not turn up any prior video releases of the film, not even on VHS. Whether this is accurate or not is not the point; no, my point is that this new release of ZAAT is just remarkable. Even without watching a brief side-by-side comparison of the film both pre-and post-remastering (one of the special features), you can easily see that a picture of this budget, reputation, and from this era, should not look as good at is does.
In a world where some movies with more prestige, talent, and critical acclaim (in comparison, anyway) have not yet enjoyed even a DVD release (William Friedkin's Rampage, for one), I have to ask: Who on earth puts this much effort info fucking ZAAT?
The fine folks at Film Chest, Cultra, and HD Cinema Classics, that's who. Not only was the picture remastered, but an audio commentary consisting of director Don Barton, co-writer Ron Kivett, actor Paul Galloway, as well as a film historian, is also provided. In addition, there is an audio interview with the film's monster (Wade Popwell), a theatrical trailer, and even a friggin' postcard! 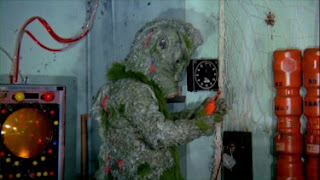 ZAAT gets points for making a film, albeit one as misguided and unintentionally hilarious as it may be, that tried to highlight the dangers of pollution that was occurring during the late 1960s/early 1970s in America. Recollections of ZAAT tend to lump it into the paranoia-fueled monster movies of the 1950s, which were all mostly reactions to "the bomb" and the dangers of radiation that could ensue should that bomb ever be dropped. Even today, innocent films like The Lorax are witch-hunted as liberal propaganda whose sole purpose is to brainwash the minds of children. Like the black-and-whites of the 50s, ZAAT, too, was a reaction to the current landscape of that time. And while anti-pollution movements and going-green initiatives are finally coming to prominence, know that efforts were made as far back as forty years ago to show you the threat was real. As goofy and dull as it may be, it was trying to do a hell of a lot more than most of the movies coming out today. Because of that, I'll give ZAAT all the credit in the world.
Go green.