ARE YOU AFRAID OF THE DARK? 1X4: THE TALE OF THE TWISTED CLAW 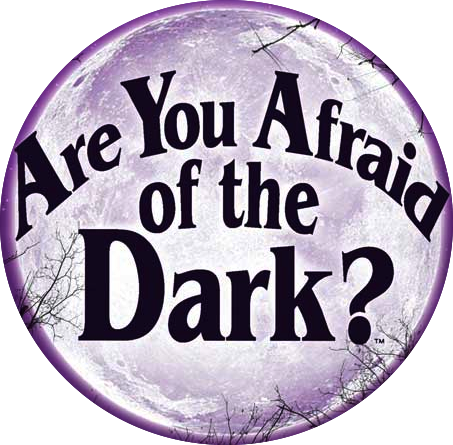 The Tale Submitted For Approval:

"The Tale of the Twisted Claw" 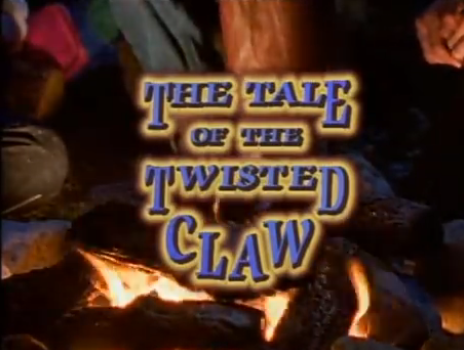 It's Halloween (yay!), or rather, the night before: Mischief Night. Two boy chums, Kevin and Dougie, are out on the town, putting their cream all over cars. Kevin, the bigger adrenaline junkie of the two, decides it would be a really good idea to pull a prank on Miss Clove, this one particular old lady that lives in town and whom all the neighborhood kids call "the witch." Because the boys are mental defectives, they accidentally spray shaving cream all over Miss Clove's face, when all they had intended to do was leave a fine lather across her front door. The boys run off, terrified, because have you ever accidentally sprayed shaving cream on an old Canadian woman? Say goodbye to your cock and balls.

The next night, Kevin and Dougie go back to the witch's house, "disguised" in their mask-less Halloween costumes, all so they can brag about it the next day at school (even though they could have just lied about it, since that's what kids do: lie). Miss Clove is delighted to have trick-or-treaters knock on her door, so she invites them in and makes Kevin, Dougie, me, and everyone on Planet Earth pretty uncomfortable with her eccentric old woman behavior. She vanishes for a spell (pun!), promising to come back with a special treat. And that she does.

"I've got something special for two very special boys!" she says, and then out from under her dress she reveals her old, gnarled, ancient box. (And in that box is a claw.)

The boys are right to be fucking disappointed, since they instead wanted one of those gigantic half-pound Reese's cups, or at the very least a plastic paratrooper. But then she explains that the claw, from that of a vulture, will grant three wishes to each of the boys, so they decide to take it, anyway.

While back on the street, Dougie absentmindedly wishes they could be done with trick-or-treating and go home. The claw "moves," tinkles some green dust, and he drops it. Kevin waves off Dougie's claim of the claw's weird non-dead-claw-like capabilities, but then the two come across a group of masked bullies, who steal Kevin's bag of candy. The boys flee in terror and then decide to call it a night.

OMG, DON'T YOU SEE? THE WISH THING IS REAL.

Following that, the boys begin to use the claw to make a series of wishes, each of which comes true, but only after the most evil and random of events happen that make it so. For instance, Kevin wishes to win the foot race against the reigning foot-race champ (dream big, Kevin), and he does...only after a mysterious black dog runs in front of the champ, causing him to tumble and break his leg.

As you can imagine, since there are precocious boys involved, everyone dies bloody. (Just kidding, although things get pretty spooky!)

Once Midnight Society member Eric totally shits the bed with not having a completed story to tell, David pipes in and offers to tell one instead. "You haven't told a story in a while!" says Kristen, which is total bullshit, because he literally told the meeting's previous story. What is this, the David Society? Fucking bitterness over this whole David thing, I swear.

Also, I brought this up when I recounted "The Tale of Laughing in the Dark," but I swear this particular tale was another non-Dark episode that was originally created as a one-off Halloween special, and was not attached to any one particular Nickelodeon show. I'M NOT CRAZY, I REMEMBER THIS.

I rather liked this episode, much like I did the aforementioned "Laughing in the Dark" – and for the same reason. The terror experienced by the kids in this episode are all off-screen and psychological. The ramifications of the kids concocting these wishes on impulse and selfishness rather than by particular design makes them their own worst enemy. Everything that results from their wishes sucks hardcore and makes their lives hell, and it's pretty much all their fault – well, that and the shit-starting claw.

The final act really ups the ante insofar as how crazy the episode is willing to go. A young boys' parents? Whatever, kill 'em off! A dead grandfather outside on the front porch? Let's do it!

Director D.J. MacHale does a good job wringing scares out of tension and mood, keeping in mind his young target audience. He's limited to using suggestion over image, which I'll credit to his imagination and not the show's low budget and censored level of fear for his thirteen-year-old demo. (MacHale has directed most of the show's episodes in general, but also most of the better ones.)

It's not visually scary, but thematically, this is kind of a fucked-up episode of what's essentially a show for children. Even though all the bad karma gets wished away before episode's end, still...Dougie's parents die. BOTH of them.

Also, the last "stupid" wish made of the claw before both kids wise up is Dougie's unthinking comment about he wished his grandfather were there, as he would know what to do. Uh oh, but Grandfather's dead! So who's that walking up the porch steps?

It easily could have been, but it's not.

Not really. It is based after all on "The Monkey's Paw," a story whose concept has been aped in all kinds of different ways for the last hundred years. (So far, "The Simpsons" have done it best.)

Not bad at all. Miss Clove kinda hams it up a little, but she was likely ordered to. (Subtlety is not the name of the game here in the land of "AYAOTD.") The kids hold their own with their performances – they're nothing to write home about, but they also could have been easily tepid.

This one's a slippery slope. They were kinda dicks for being out on Mischief Night and creaming car windshields and doors, but they didn't mean to actually spray anything on Miss Clove directly. But then again, they were all gung-ho about going back to her house on Halloween night simply to brag about it later.

Yeah, fuck these kids. They totally deserve it.

He doesn't, trust me. It's all in your head.

Only minor allusions to the Canadian double-O sound to offend the ear; nothing really worth mentioning.

After the episode, the Midnight Society has a David Parade, where David is carried on a throne all through the woods while the girls lay palms in his path and the men look on in awe at this magical specimen that is David.

"Thanks for saving the night!" Kristen said, while flashing Eric her finger in the middle.

Hopefully David will be modest enough to let another Midnight Society member have the floor for their next story session.

I Award "The Tale of the Twisted Claw..."