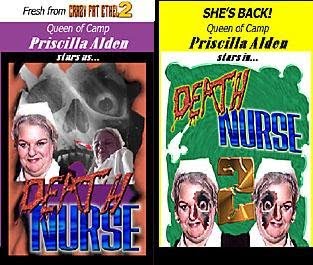 Say what you will about Nick Millard; he remains faithful to the series that shat out his legitimate (read: non-porn) career. Most likely on the exact day that Crazy Fat Ethel 2 (the sequel to his truly divine Criminally Insane) wrapped principle photography, he announced that he "kinda had an idea” to keep going with this premise of an obese woman killer, because frankly, he had absolutely nothing else to do. Luckily, he was able to coerce frequent go-to-"actress" Priscilla Alden's hand out of a large honey jar and bring her along for the ride. And thus, Death Nurse, a departure of sorts (only not at all) for the directing/acting duo came to fruition.

Death Nurse, originally conceived as Look, It's Fat-Ass Fucking Pig Ethel! Let's Watch Her Fat Around For A Third Time!, was a movie Nick Millard had pitched to the same half-assed company that actually released the first two Crazy Fat Ethel films. Embarrassed of their business relationship with this turd, they demanded that Millard come up with a new concept to explore. Suddenly, an actress dressed as a nurse walked by in the hallway.

The film executive, who had seen the same nurse, shook his head, mortified he worked with such douche bags. But he greenlit the movie anyway, because he's a film exec, and films execs majored in Communications, which means they don't know any better.

Edith Mortley, a fat nurse, runs some half-assed rest home/clinic called Shady Palms with her freakishly emotionless brother, Gordon (the fly-soup man from Crazy Fat Ethel 2). Together, they kill whatever poor old schmucks end up on their doorstep in need of some assisted living, merely to collect their pensions, which apparently is perfectly legal, unsuspicious, and untraceable, so long as you are 300 pounds and have access to a primitive nine-digit adding machine.

And oh boy, does Edith add up pensions. Watch as she does it six times during the movie, while you wait in vain for something the least bit interesting to happen.

While not murdering men, Gordon performs haphazard surgery on people, using a dishtowel as a face mask and keeping it in place with rubber bands. And when I say surgery, I mean he hovers a fake scalpel over someone’s chest and sprays much-too-goopy blood all over the place, which he then wipes away with a sponge, revealing the non-wound. Then he grabs a tray of steak knives and forcibly inserts them into the patient’s chest, all while Edith smiles and looks fondly down at the new corpse.

Gordon then digs a hole and fixes himself some ice cream, all shot in pain-staking real time.

When there's a knock at the door, I wonder if it's my soul, who will beg me to turn off this radiation and go outside.

Edith rolls down the stairs and sees a social worker hand over a man who coughs a lot. Edith smiles, shifts her belly to the right side of her knee, and leads the man to his bedroom.

Later that day, she smothers him with a pillow. When his death doesn’t come as quick as anyone watching this film would wish, she lays her fat fucking old body on top of his face until he eventually stops quivering.

I picture that’s pretty much how God is going to end the world when it’s our time: via fat nurse.

A patient at Shady Palms, who is also quite an avid drinker, flirts disgustingly with Gordon until the two go for an incredibly disturbing and unattractive roll in the sack. Wishing death to infants doesn’t even come close to how much pain and unfocused anger a person will experience while watching this scene.

The social worker drops off another patient to the Mortleys, and while you might think this would result in an immediate murder, instead we get to see footage of Ethel holding her fat arms around her fat body pacing around a room as Gordon digs another hole in the backyard.

Edith beaches herself on the couch and dreams footage from Criminally Insane, a movie which is so far removed from where we currently find ourselves that I am actually yearning for it. Then she gets up and helps her brother saw a man. And THEN they chase a cat around the kitchen table for five fucking minutes like a bunch of jerk-offs. After that, Edith feeds tiny pieces of the sawed man to a bunch of rats that live in their basement.

The social worker comes to the clinic but commits herself, wanting to lie in bed and eat tepid food. I couldn’t tell you why, because at this point the TV is muted and I am counting the ceiling tiles above me.

Edith kills the social worker in her typically awkward and incredibly unrealistic way (why on earth does this movie continue to be?), and she then goes after the drunk who witnessed the whole thing, brandishing a turkey baster that we are supposed to think is a large syringe, and stabs her a lot.

Then she takes another fucking nap and dreams of the first fucking movie fucking again.

A cop comes to the door to see about some missing people. Edith fats her way out of it and shuts the door, smiling and dreaming of cheese fries. The cop, however, spots something suspicious and investigates.

The movie ends with Edith and Gordon sitting on the couch with not-so-bright looks on their faces as a cop discovers the garage of horrors and rats.

And just when you thought the terror was over, you were wrong. The following year, one of the most auspicious sequels ever to be released took the world by storm, and while that film sure as hell wasn't Death Nurse 2, that came out, too.

Nick Millard sat in the back of the theater, hiding himself from the audience that was screening his film Death Nurse. He relished the moment when the audience jumped to their feet and booed the conclusion of the film and bitched about the money they had wasted to witness this travesty. No one ever told Nick Millard that "booooo!" was a bad thing, so he quickly began planning the final installment of this demented, pointless franchise that no one ever wanted to see.

Nick descended to the nearest Taco Bell, treated himself to a luxurious meal and, while eating on the hood of his car, wrote the script for Death Nurse 2 in the hand not holding a chalupa.

And here we are...at the end of our journey...with Death Nurse 2.

Nick Millard desperately wanted to resolve what happened to the Mortleys at the end of the first Death Nurse, having mistaken the audience's mix of laughter and befuddlement with a genuine, insurmountable desire to see this story through to the end.

Are the Mortleys arrested and tried in a court of law?

Are they killed dramatically in a struggle between good and evil?

Does Edith eat an entire carton of moon pies?

Well, the sequel picks up where the previous film left off, and we see the cop wander over to the front door after perusing through the garage of horror and rats and is stabbed once or twice by Edith, and most likely falls.

And once again, this film utilizes footage from all preceding films. Cuz why not? Someone would buy it, and Nick knew this, so why not just make a terrible film and literally laugh at the people handing you money?

Edith and Gordon get back to business, having killed the cop and I guess easily getting away with it.

We meet Brownie, played by the drunk woman in the first Death Nurse. She is homeless and likes to hunt through dumpsters. She also has a large butcher knife, which she randomly brandishes whenever she feels threatened.

Brownie gets picked up by another social worker and is dropped off at the clinic. Edith goes to take Brownie’s paper bag of goodies, causing Brownie to whip out her large knife and very slowly chase Edith around the couch four fucking times times.

In fact, this scene is so ridiculous that you need to see it for yourself.

The action starts at 4:10. Please don't watch more than you have to. The film causes immediate retardation.

Edith finally stops running - her fat loose skin heaving with each musty exhale - and she smiles, calms the woman, and poisons her. She then takes another nap and again dreams of Criminally Insane, and of random buildings we’ve never seen before, and won't again.

Brownie wakes up in a stupor, obviously not dead, and stabs Gordon with her trusty knife. Edith enters, kills Brownie, and fixes Gordon’s wound.

Say, I have a question: Why on earth did anyone ever feel the passion and the drive to make this fucking thing?

Gordon, still hurt from his Brownie confrontation, lies in bed and looks as lifeless as I feel watching this movie. At several points throughout the film, when Edith addresses a question to him, we’re greeted with repeated footage of him not responding, and turning his face slightly away from the camera.

Then Edith kills another patient, slamming a large cleaver into his neck repeatedly.

You’ll never guess what she does then.

Perhaps run a marathon and then tell me I am allowed to shut off this movie?

Hmm...I bet it's take a nap and dream of the first film again.

Later, an old woman shows up who was a twin sister of one of the characters killed in the last film (same actress, obviously). She screams, or something, and is killed by a tinfoil knife.

Alright, you know what? Show’s over, people. I give up. I was doing this for you, but I just can’t continue on with this movie any further. I am literally stopping without finishing that sentence.

I'll have to speculate as to how this movie ends. Maybe Edith kills her brother and is eaten by a bear. Maybe she farts a hole in the ground and falls into Hell. I’ll never know.

It doesn't matter, though, in the big scheme of things, now does it?

So there we have it: a quadrilogy of terror and suspense two decades in the making. We, the audience, have laughed and cried with Ethel Janowski/Edith Mortley. We've witnessed her at her most vulnerable and relished her final metamorphosis from the antagonizer to the sympathizee.

And Nick Millard is still alive and kicking, so maybe one day he'll reward our patience with Crazy Fat Ethel 5, or Death Nurse 3, or Watch A Fat Woman Farmer Kill Farmhands And Then Eat Farm Food Like Bacon For An Hour Part 1 of 7.