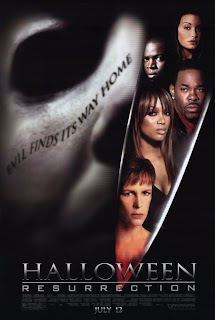 "I met him fifteen years ago. I was told there was nothing left. No reason, no conscience, no understanding; even the most rudimentary sense of life or death, good or evil, right or wrong. I met this six-year-old child, with this blank, pale, emotionless face and, the blackest eyes... the devil's eyes! I spent eight years trying to reach him, and then another seven trying to keep him locked up because I realized what was living behind that boy's eyes was purely and simply... evil..."
– Great

To chart the regression of the Halloween series, one must compare it to a symbolic reversing of human civilization in its entirety. We must demote the human race from technologically advanced, intelligent, and mostly rational beings to hairy, misshapen, farting gorilla-men who smash bananas all over their straw beds and/or gorilla-wives.

If the original Halloween was to be personified as a valedictorian of his senior class in Yale who effortlessly scores with hot chicks, tells witty jokes to large laughing crowds, and manages to cure cancer all while singing a Latin aria, then Halloween: Resurrection would be the slow fat kid with thick glasses and a lazy eye who randomly shits himself and licks the window.

The series has had its ups (Halloween 2 [written by a drunk John Carpenter for shit's sake], 4, H20), its downs (5 and 6), and its black sheeps (Season of the Witch), but never has any franchise delivered such a hard, collective kick in the proverbial balls to its beloved fan base than Halloween: Resurrection. (The less said about Rob Zombie's abominations, the better.) Whoever thought this concept was a good idea should have their head and asshole joined in perpetuity until that fateful day when the waves rise and demolish the entire planet.


The movie immediately opens with narration from Jamie Lee Curtis, talking about “the tunnel” (aka death). The words are chilling, and warm thoughts of the surprisingly good Halloween: H20 dance like sugar plums in our heads, so we falsely think we’re in for another thrilling ride with Michael Myers at the helm.

We’d be wrong, though, as we so often are.

Two nurses in an insane asylum discuss the plight of Laurie Strode, who has been committed ever since beheading the man she believed to be her brother. See, because during the climax of H20, Michael Myers apparently decided to stop trying to kill his sister and instead think far enough ahead to capture some random dude, crush his larynx, and put his mask on him, all because his telepathic powers told him Laurie would believe that poor man was her brother and kill the fuck. This kind of cunning coming from the guy who walks through glass doors instead of opening them.

It’s bad enough when a sequel is shitty. It’s even worse when that sequel rewrites the ending of the previous film. But when your shitty sequel entirely retcons the last 20 minutes of that previous film, rendering the most exiting act as completely inconsequential, well that just fucking sucks. That’s like a sequel to Teenage Mutant Nina Turtles intimating that they were actually bears.

Even though we’re all here watching a movie essentially called Halloween 8, and should know what the deal is by now, Short Old Black Nurse annoyingly dictates the events of the past movie to Plain Young White Nurse anyway, providing exposition for the kind of audience who came to see a horror movie starring an obnoxious rapper and the kid from Rookie of the Year: people with awful taste and nothing better to do.

Jamie Lee Curtis, former godmother of the series, was contractually obligated to appear in this installment, a previous stipulation of making H20, and boy is it obvious, because she's only on screen for about five minutes before she is unceremoniously killed off. After the last stab that Michael's blade would ever inflict upon her person, her body slowly tumbles down through the foliage of the autumn trees (spoiler), as does the quality of this movie, only much quicker.

We then meet our Laurie Strode replacement, Sara (Bianca Kajlichcihchci), as she wistfully rides her ridiculous Vespa through her community college campus, which is the most development her character will receive: she has a Vespa.

She hooks up with her blond stereotype, Jen (Katee Sackhoff of "Battlestar Gallactica"), who mugs for the camera and embodies the type of girl you jerked off to in high school, but never considered marrying.

They go and meet Rudy (Sean Patrick Thomas). He's chopping veggies because he wants to be a chef. He'll reference food nonstop throughout the movie.

The kids all provide additional exposition by discussing the "contest" they have entered – that of spending a night in Michael Myers's former home, now an abandoned house – for a grand prize of an anonymous sum of money.

Sara goes back to her dorm and chats with her online "mate," Deckard, a fifteen-year-old boy pretending to be older. Deckard's friend, who remains one of the most annoying actors I have ever seen in film, continues to over-enunciate every last syllable of his dialogue, spastically freak out over Deckard's lack of attention to him, and fail to keep his Parkinson's in check. All at once!

We finally meet Freddie (Busta Rhymes, in a performance so terrible that shitted-up toilets were offered their own web series). Freddie owns Dangertainment, some sort of entertainment company that the filmmakers don't even bother to explain.

He lives in a motel and watches royalty-free karate films.

He smiles pretty much constantly.

We then meet the rest of the cast, who I won't even bother describing because they're all as vapid as the would-be love child of Kim Kardashian and a dick-shaped can of beans. I will, however, briefly detail Rookie of the Year's character: he's constantly thinking about boobs, and sex, and is supposed to come off as a jovial horn ball, but actually comes across as the creepy sex offender your mother warned you about. He'll spend the entire movie licking his lips and staring at skirts.

Deckard and his giant ball of nerves he calls his friend attend a Halloween party. Deckard, being the nerd that he is, immediately finds a private room with a ginormous computer monitor and tunes in for the Myers House online broadcast. Soon, the room is full of curious party-goers, all who would rather watch stupid kids wander around in the dark than drink, fuck, and listen to hip hop (and this takes place in America!).

So they all enter Michael's house, but…unsurprising twist…so does the homeowner. While the gang is exploring the house and "discovering" planted bullshit, Michael takes his good old time, dispatching each victim one by one.

By the way, what's with this musical score? This simple, brainless plucking of guitar strings that sounds like it should be complementing footage of old cowboys sitting around a fire and bitching about life?

Michael pops up and whacks off (LOL) Jen’s head, and as it bounces down the steps, I wonder when this series descended into nothingness.


The talentless get stabbed, their heads get crushed, and their perfect bodies get impaled on rusty gates. Soon only Sara and Freddie remain (trapped inside by some apparently inescapable twenty-year-old boards nailed over the windows).

Michael pops up to fool the audience into thinking this movie is the least bit frightening, but Busta karates him right out the window and he gets hung in some power lines.

But he comes back, though, you know. Because of that whole “three times” thing.

Though Sara attacks Michael with a chainsaw, she manages to barely hurt him. And because Sara doesn’t look quite stupid enough, with each saw swipe she blurts out, "This is for Rudy! This is for Jen! This is for all of them!" Then she falls, and heavy Foley board equipment falls on top her.

Surely this is the end of Sara and the movie...or this is the part where Busta pops in and really tries to act like a hero, but all he does is make a sour face. He swats at Michael with a shovel, and instead of beating his head with the metal part, he figures he'll just slap Michael's shoulder with the wooden part. Way to go, hero.

After doing "karate," Freddie is stabbed once and thrown aside. Why only once? Because idiotic 16-year-olds from the Bronx who test-screened this mofo wanted Busta to live.

Halloween: Resurrection goes down the list of ways Michael hadn't yet been killed, picks the most ridiculous one, and utilizes it: electrocution of his dingle-thing.


After Michael's temporary demise, Busta realizes he has seen the error of his ways. Upon being asked by some reporters about his encounter with Michael Myers, Busta nobly responds, "Michael Myers is not a sound byte...Michael Myers is a killer shark in baggy ass overalls who gets his kicks from killing everyone and everything he comes across."

But hey, it's finally over.

Well, since nearly every single Halloween flick has ended with promises of a sequel (except the previous one, which unfortunately led to this sequel anyway), why should this one be any different?

Yes, much like the ignorance of test screen audiences, the Halloween franchise will never die. Had the filmmakers book ended this film with Jamie Lee, still not giving her much to do during the bulk of the film, yet having her inexplicably show up at the end to kill Michael – and fine, die in the process – it would have made this film feel less unnecessary. Fans would have been happier and Jamie still could have honored her required 30 seconds of on-screen presence. The creators of Hypercube and The Birds 2 felt otherwise. And thus ends a series that started off brilliantly and ended with the cock-whip of a travesty called Halloween: Resurrection…

…until Rob Zombie came along. But that’s for another time.