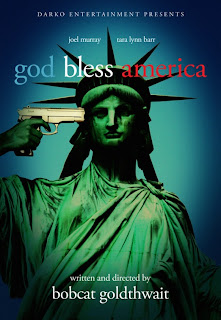 "My name is Frank. But that's not important. The important question is, 'Who are you?' America has become a cruel and vicious place. We reward the shallowest, the dumbest, the meanest, and the loudest. We no longer have any common sense or decency. No sense of shame. There is no right and wrong. The worst qualities in people are looked up to and celebrated. Lying and spreading fear are fine, as long as you make money doing it. We've become a nation of slogan-saying, bile-spewing hate-mongers. We've lost our kindness. We've lost our soul."

Between his feature film debut, World’s Greatest Dad, and now with this, Bobcat Goldthwait just might be the angriest man alive.
Luckily he’s got a sense of humor about it.
Frank (Joel Murray, “Mad Men”) has had enough. After being unceremoniously fired from his job for harmlessly sending flowers to the receptionist, and after being told by his extremely snotty daughter that she refuses to come visit because he’s boring, and after being told by his moon roof-loving doctor that he has an irreparable brain tumor growing inside him, Frank gives up. And after catching glimpse after glimpse on his television of how ugly and rotten American culture has become, he decides to take down as many rotten and spoiled motherfuckers as he can before eating his final bullet.
Sounds all kinds of bleak and depressing, doesn’t it? Well, it’s not. It’s actually kind of hilarious.
Along the way, Frank meets Roxy (Tara Lynn Bar, star of copious Disney programming), who is equally disgusted with the state of American culture. After witnessing Frank kill Chloe, who is meant to be a riff on the starlets of MTV’S "My Super Sweet 16," Roxy joins Frank on his crusade to exterminate the vapid and the offensive. It brings them literally across the country, laying waste to those they feel are harming every day citizens, as well as punishing the rude and mean when necessary. Their relationship is very similar to the one shared between Rainn Wilson and Ellen Page from last year's Super. 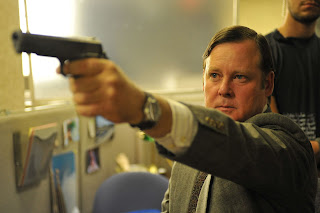 God Bless America is a concept that I’m sure many of us have been writing in our heads over the last five to ten years. I know I have. It is an absolute crucifixion of the American culture, a term I really use loosely. Because America has no culture. As the Republican Party attempts to cut funding to National Public Radio, a harmless little radio station that only wants to play classical and jazz, present live readings of literature, and transmit audio documentaries, "Jersey Shore," meanwhile, is greenlit for a fourth or fifth or whatever-the-fuckth-season. As arts programs in public schools shrink smaller and smaller, every single fucking kid in the world inexplicably has an iPhone or an iPad. And as schools struggle to have at least one computer in each classroom, those that do are used to log onto Youtube and watch people die, or hurt themselves, or hurt others.
Think of God Bless America as an angrier and darker Idiocracy.
I’m sure many of us have had enough. Filmmaker Bobcat Goldthwait definitely has. The movie isn’t just a condemnation of American culture, but a warning as to what so many of us are very possibly thinking. For how much longer will Bill O’Riley or Rush Limbaugh get away with imposing their personal and vitriolic political opinions but calling them facts before some of us finally go mad and do a bit of house-cleaning ourselves? How many of us would take a baseball bat to Snooki’s knees if we ever came across her in a dark alley? How much longer will we all be able to stand seeing multiple television shows capturing every waking moment of the Kardashians, or Paris Hilton, or every single person who is famous simply because they were born into money, but are actually terrible and cruel people? 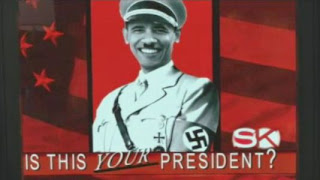 Interestingly, Frank’s anger is directed at “American Superstar,” very much an “American Idol” parody that re-imagines the William Hung fiasco with a mentally challenged singer named Steven Carter. I say interestingly because while it becomes the focal point of Frank’s rage, the show is actually depicted as the least harmful and least obnoxious of all his other targets. I suppose that could have been the point—that the most harmful parts of our culture are those that aren’t on-the-surface evil until we began to really break them down and realize just how much they are infecting our unconsciousness and turning us into an army of insensitive assholes.
And that scene in the movie theater…tell me with a straight face that you’ve never fantasized about blowing off the faces of the assholes sitting a few rows behind you who frequently answer their phone and talk way too loud.
Watching God Bless America, you might be shocked, and you will definitely laugh, but as the credits roll on the film, that indifference and angst you might have momentarily put away will come flooding back. Because this movie is just that: a movie. When you go out your front door, people are still going to be rude, and hurtful, and completely self-absorbed. When you turn on that television, people who have never worked a day in their lives are going to act like fat, nasty cows while you count the few miserable waking hours you have before retiring to bed to prepare for another nine hours in your too-hot, cubicle-shaped prison cell. 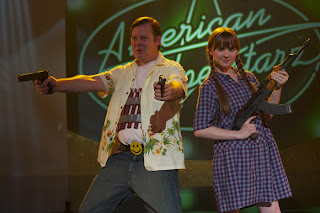 G.B.A. just might be something I revisit on a regular basis to live vicariously through Frank and Roxy’s actions, and hope that one day someone actually picks up where they left off…but this time for real.