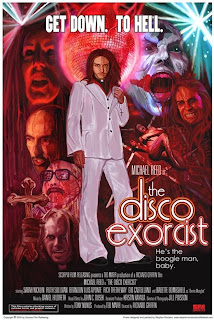 The other day I received a screener for The Disco Exorcist in the mail. I took one look at the synopsis...and I groaned. And after I watched the trailer, out of curiosity...I groaned even louder. But, because I vowed to review every single piece of material sent my way, I bit my lip and hit play.
I gotta tell ya...I laughed quite a bit. And not ironically. I found much of it to be legitimately funny.
As is all the rage these days, The Disco Exorcist is shot to look like a '70s film - more specifically, a satanic thriller...but with a lot of sex. Think Boogie Nights, when Jack Horner wants nothing more than to make a legitimate cheesy action film that happens to feature a lot of sex. Bad wigs, bad disco, horrendous acting: that is The Disco Exorcist in a nutshell, but on purpose. 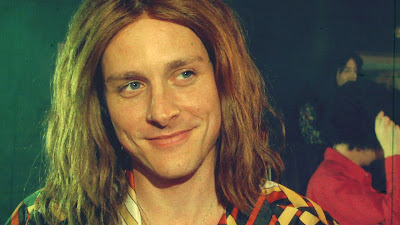 As the opening title sequence declares, Michael Reed is Rex Romanski: The Disco Exorcist. From what I can garner, he has no job whatsoever, but because he is a wicked disco dancer, he manages to bed pretty much every single woman who catches even a mere glimpse of his ludicrous wig. One day Rex beds and dismisses the wrong girl - a fellow discoer named Rita Marie - who happens to not only be completely insane, but also a bewitching practicer of the dark arts. Once Rita Marie is scorned, she turns her devilish attention to Amoreena Jones, Rex's new main squeeze as well as a porn star. Murderous manipulation ensues. Black-eyed possession becomes commonplace. And it is up to Rex Romanski to save the day, vanquish evil, and receive, like, fifty blowjobs during the course of the adventure.
The Disco Exorcist is exactly the kind of movie Troma would make, only it actually manages to be funny. And it also has a lot more penises. While not all of the intended humor works (and to be fair, not even your favorite comedy is flawless in this regard), I have to say the screenplay was not only very funny at parts, but in some ways reminiscent of Woody Allen's late '70s career, where he took more chances and seemed both angrier and more absurd. Props especially must be given to Rich Threteway as Angel, whose every line gave me one laugh bigger than the last. His poorly performed and faux Italian accent made each of his ridiculous lines all the more amusing.

Though for films like this the temptation to be self-aware may be overpowering, there are no cheap jokes in regards to The Exorcist, The Evil Dead, or the like. (Although I'll be damned if I didn't hear an, "Oh, Hi, Mark!" crammed somewhere in there.)
The filmmakers did a great job in post of making the film look every bit as old as it's supposed to be. Unlike Tarantino's Death Proof, his half of Grindhouse, they actually bothered to maintain the weathered look from beginning to end, and it lent a touch of novelty to the movie's bizarre events.

Even better, The Disco Exorcist is actually smarter than you would think. What appears to be, on the surface, nothing more than a c-grade skin flick is actually a morality tale about misogyny, monogamy, and women empowerment. These were common themes in the horror genre during the '70s, perhaps best exemplified by Meir Zarchi's Day of the Woman (aka I Spit on Your Grave). Not bad for a movie that rips off a man's penis and throws it across the room (for laughs). 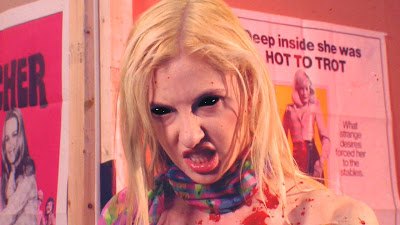 The Disco Exorcist opens with sex, closes with sex, and crams a whole lot of sex into the middle portion, known as "the rest of the movie." And though the ironically-titled green band trailer (which wasn't "green" at all) should have prepared me for all the sex, I was still taken aback. And before you shout at me, possible fan of the film, I understand that the horror genre has long included, even since the 1960s, this sub-genre of c-grade to z-grade exploitation films featuring very shoddy film making, even shoddier acting, and very mangy nudity. Some of the stuff is often outright porn, with some tedious set pieces in between the hardcore scenes serving as pathetic tools to keep the action moving forward. This isn't a sub-genre I particularly seek out, not for any reason other than it's just not my bag. I know some people out there are into this, and that's cool. Perhaps me complaining about the amount of sex is like saying there are too many dream sequences in A Nightmare on Elm Street. I'm sure one of the points of the film was to fill it with campy and over-the-top sex scenes, as that's exactly what the filmmakers were going for. It's a tough call to make, but for me personally, crude humor was used as a crutch far too often. Were it not for all the debauchery involved, I would happily recommend The Disco Exorcist to more of my like-minded friends, for if I did that now, they'd look at me as if I were some kind of pervert.
I guess The Disco Exorcist will have to remain my dirty little secret.

Definitely NSFW Trailer.
Posted by TEOS at 1:27 AM