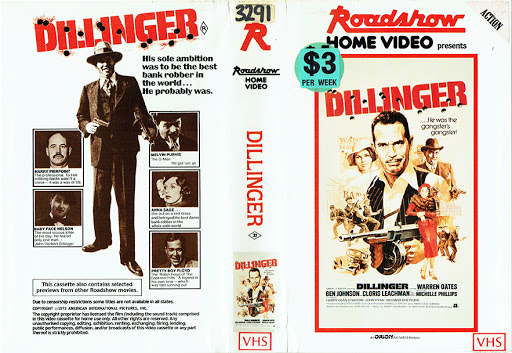 In 2009, Michael Mann had hoped to tell the definitive story of the most famous bank robber ever—Public Enemies. With Johnny Depp as the John Dillinger, Marion Cotillard as his love, and Christian Bale as “G-Man” Melvin Purvis, the potential was there for not just another solid crime thriller from the director of Heat and Collateral, but for a new classic to stand alongside the great period crime films like The Untouchables, Road To Perdition, and more. Unfortunately, Public Enemies proved to be, er...the nice way of putting it would be an underwhelming disappointment, when taking into account the pedigree involved in bringing it to the screen.  It’s hard to gauge how much of Public Enemies’ audience was aware that the story of the John Dillinger Gang had already been told nearly forty years prior, written and directed by John Millius. It’s also hard to gauge how many people realize just how much better Dillinger is. The film opens with a sequence which sees this version of John Dillinger, played by Warren Oates, ordering a bank teller to make with the cash, even though he’s at this moment breaking the fourth wall and directly addressing the audience. “Nobody get nervous, you ain’t got nothing to fear,” he tells us. “You’re being robbed by the John Dillinger Gang—the best there is!” This opening scene alone is better than the best parts of Public Enemies.

Back-to-back viewings of Dillinger and Public Enemies will tell a pretty similar story, though in different ways, and utilizing a different timeline of events. Like Public Enemies, however, Dillinger presents its title “character” as a charming, lively, no-nonsense bank robber more interested in stealing from the federal government than from the pockets of the individual. Oates’ take on Dillinger might be a bit more true to life, presenting him as someone who takes what he wants—including women—by force. The start of the union between himself and Billie Frechette (Michelle Phillips) ain’t exactly romantic, as it’s more akin to a kidnapping, and the black eye she later sports is dismissed as a “marital disagreement,” The usual suspects are there: Homer Van Meter (Harry Dean Stanton), Harry Pierpont (Geoffrey Lewis), Pretty Boy Floyd (Steve Kanaly), Baby Face Nelson (an irascible Richard Dreyfuss), with Melvin Purvis (Ben Johnson) pursuing them all. 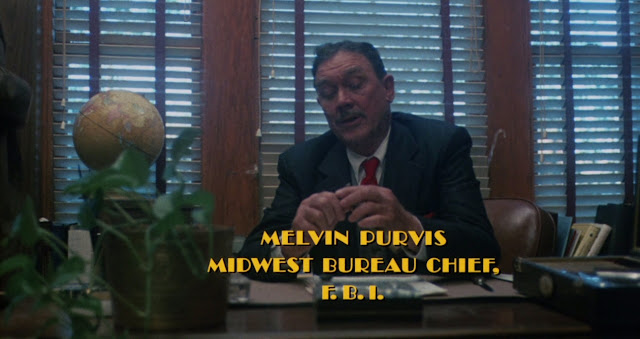 Dillinger unfolds in a docudrama fashion similar to Roger Corman’s period Chicago gangster flick The St. Valentine’s Day Massacre, relying on voice-over to provide fact-based narration that propels the narrative forward (supplied by Johnson’s Purvis). Being that more time is spent with the gang than with the FBI agents hunting them down (very little time is spent on investigatory techniques; mostly these confrontational scenes begin with the agents already at the scene), it’s easy to determine that Millius was infatuated with these criminals and less so with “the law.”

Ben Johnson offers a gruff performance as Purvis—one punctuated with glee each time he takes the life of a criminal and lights a cigar in celebration. In fact, one of his final scenes has him promising the woman who ultimately gives up Dillinger's location that “no harm” will come to him, with Pruvis stating he wants to take him in peacefully. Whether this is something the real Purvis had promised and subsequently defaulted on, or was a cinematic creation to heighten Millius’ seeming skewering of the FBI of that time period, that moment pushes Johnson’s Purvis from a relentless law agent to an Ahab-like figure pursuing a personal vendetta. (Historically, Purvis does not fire the fatal shot.) (Also, interesting, two historical accounts slightly differ in Dillinger’s final moments—some claim he realized the agents were there and attempted to pull a gun from his coat pocket; another claims he did successfully retrieve his gun and ran into a dark alley, intent on shooting his way out of the situation. Both Dillinger and Public Enemies have him being shot down in the street with no attempts to take him alive. This, likely, leans closer to history than what “history” claims.) 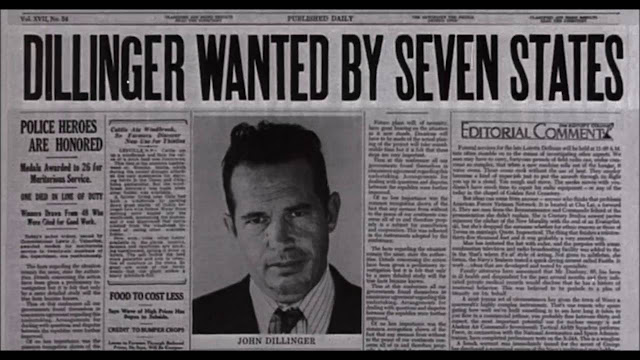 Dillinger’s post-Little Bohemia shootout finale takes a bit more time to draw to a conclusion, as we see each of the Dillinger Gang’s surviving members disperse and attempt to elude authorities, and it slows the film’s pace somewhat, but the before mentioned theater assassination punctuates the film and allows it to end on a somewhat somber (and violent) note. (The whole film, in fact, boasts much more violence than Public Enemies—with no cheap CGI blood to offend the eye.)

The John Dillinger Gang story has been told numerous times already, and it’s safe to assume Public Enemies won’t be the final word on the subject, all the Depps and Bales notwithstanding. Dillinger, however and so far, is the best attempt. Historical inaccuracies and somewhat broad character archetypes aside, it’s a captivating, violent, well-made, and mostly accurate account on the John Dillinger Gang—the best there is.