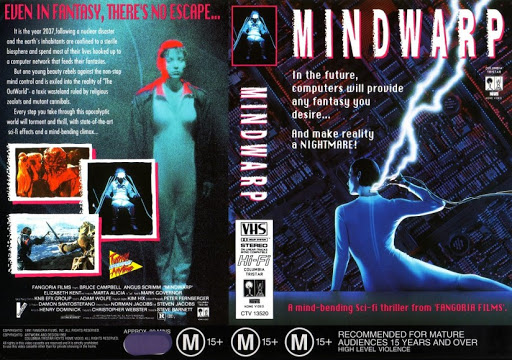 Filmmakers, especially horror ones, were sort of obsessed with the idea of computers and artificial intelligence during the 1990s. Lawnmower Man comes to mind, as does Ghost in the Machine and Brainscan. None of these films are of any particular merit, but it's not really the fault of the horror genre per se. For fun, we can throw The Net into the mix for proof that big-budget Hollywood projects could be equally ludicrous. Hell, perhaps you remember the sexually charged Disclosure from 1995, a serviceable thriller starring Michael Douglas and Demi Moore that features, by today's standards, a frankly hilarious virtual reality third-act climax whose special effects were on par with South Park. No one was really making any pro-computer films because they were still considered a new technology (at least at the consumer level), and, as with all "new" things, people didn't know enough about them, and hence were terrified of them.

Mindwarp, released in other parts of the world with the higher-stakes title of Brain Slasher, is something of a different beast. It has more in common with 2001 than any of the above films, and also includes a dash of Mad Max and Total Recall. It presents on a philosophical level the danger not of computers in general but of our dependence on them. On this wasteland formerly Earth following nuclear fallout, human civilization was divided into two groups of people: The first group consisted of those who escaped the blast into a permanent indoor environment where they can plug into computers all day and pretend to be anyone, anywhere, at any time in history. (These plugs go into the back of the neck, by the way, so suck it, The Matrix. Mindwarp was here first.) 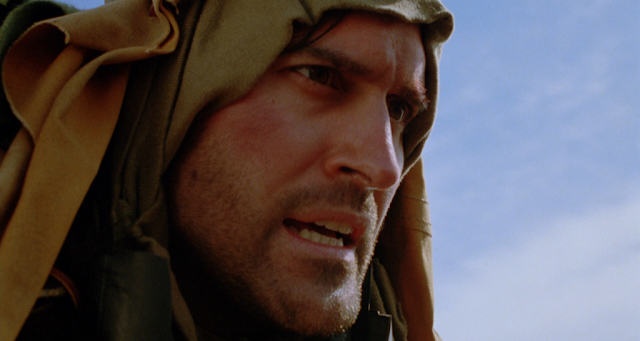 One of these hiders is a young woman named Judy, confined alongside her mother, who has grown tired of the artificiality of it all and demands to SysOp (the Systems Operator) to free her and allow her entry to the outside world so that she may see for herself what the "real" world is like. Well, its exactly there where Judy meets the other group of people: scavengers destined to hunting rodents to survive, covering themselves head to toe in furs and burlap to shield themselves from the sun (and those who don't turn into drippy gooey mutants). As you can imagine, some of these outsiders are really really mean and it causes all sorts of havoc. Along the way, Judy meets Bruce Campbell, one of these scavengers just trying to survive. Things go fairly well, and each begins to learn about how the other half lives, but then things go badly pretty quickly and Judy is kidnapped by these mutants where she meets Lord of the Mutants, Angus Scrimm. Only one person will save the day - guess who!

Fucking Mindwarp. What a quirky, well-meaning film. At times both philosophical and entirely stupid, well made and...not so well made, it's the kind of harmless Blockbuster horror shelf fodder that I frankly miss. Regardless of the success that Mindwarp obtained, it's easy to tell that everyone involved in this - from director Steve Barnett, co-writer John D. Brancato (hey, he wrote The Net!) to its cast of Campbell, Scrimm, and Marta Martin - believed in the film they were making, because it shows. Everyone's on board, even for the silliest of aspects, so for that alone Mindwarp deserves at the very least a round of mutant applause.

Mindwarp is goofy, corny, and was destined for late-night Sci Fi Channel. But there's also an undeniable charm about the whole thing. A film with a rather pessimistic view of the future that features philosophical conversations about God, love, "what is real?" mixed with mutant cannibals, swords and leather, scary women with green gooey syringes. Take Bruce Campbell, add some Angus Scrimm, remember that this film is "presented" by Fangoria, and just enjoy it for what it is: an early '90s cheese plate. 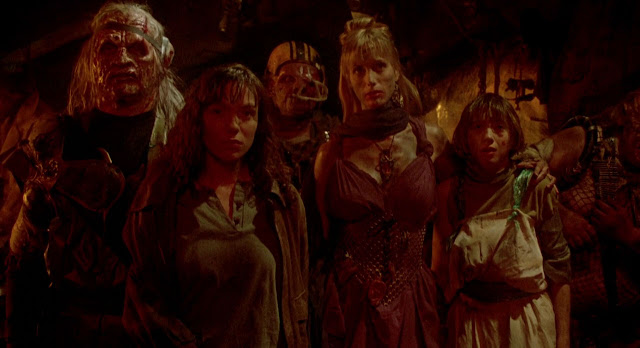