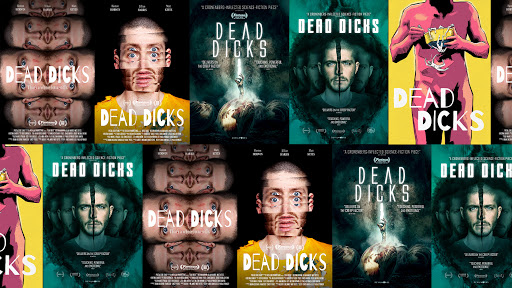 If David Cronenberg had a sense of humor, he would’ve made something like Dead Dicks. Pushing aside, of course, the obvious connection that Dead Dicks is a Canadian genre production, I’m actually focusing more on the large, otherworldly, interdimensional vagina that’s growing out of the apartment wall modeled after the opening that protrudes from James Woods in Cronenberg’s Videodrome, but which acts like Phantasm’s space gate. In the same way that the Tall Man sees his comeuppance throughout the Phantasm series and a fresh copy of the Tall Man re-enters the world through said space gate, removes his corpse, and takes over for him from there, Richard (Heston Horwin) is caught in a never-ending cycle where he’s desperate to end his own life inside his cramped apartment, but each time he does, a fresh copy of him is borne from this giant vaginal opening in his bedroom.

Written and directed by first-time feature directors Chris Bavota and Lee Paula Springer, Dead Dicks is a wild way to break onto the scene, and that it’s being distributed by Philadelphia label Artsploitation Films is both a minor victory for the filmmakers and a way of labeling Dead Dicks as certainly outside the norm. In case you’re unfamiliar with the label (and you should really dive deep into their catalog if you are), Artsploitation Films releases uncompromising international titles that defy genre conventions and will never be caught dead screening at your local multiplex. While some of their titles veer way outside normality at the expense of the story being told, their most successful titles are those that play with strange and wild ideas while infusing their stories with real, relatable, emotional backbones that make such wild ideas wholly approachable. Germany’s Der Samurai, a previous acquisition from the label, is a perfect example of this balance (and, honestly, is a favorite of my own), and Dead Dicks eagerly follows in its footsteps. A little bit horror, science fiction, comedy, and drama, Dead Dicks is obviously hard to categorize. What it very much is, however, is about something – in this case, mental illness, depression, suicide, and how those things can affect a family that’s not prepared to deal with it. Bearing the brunt of Richie’s burden is his sister, Becca (Jillian Harris), who has spent her adult life trying to offer support to her sullen brother but feels her patience running out and wanting nothing more than to, for the first time, focus on her own life. The giant vagina and an apartment filled with copies of Richie’s dead body certainly puts the kibosh on that.

Based on the collection of genres that it bandies about, it shouldn’t come as a surprise that Dead Dicks’ tone gets a little schizophrenic at times, exacerbated by inconsistencies with how “serious” the characters are taking the very surreal events of the story during certain times. Through a weakness in the writing or a strange choice to convey Becca’s initial ambivalence over Richie’s shocking reveal, it’s hard to tell, and harder still, whether or not to determine if this was intentional to maintain the film’s point about a family’s failure to notice the warning signs about suicidal behavior, but once we move beyond this initial point, the amount of seriousness over the siblings’ surreal new reality begin to take centerstage, which allows for moments of perfect humor to balance out the story’s darker themes. Indeed, unlike most genre films, Dead Dicks’ second act is the most effective in the film, allowing the audience to settle into the film’s surreal concept and also allowing them to find humor in the situation. (There’s a pretty great moment when Richie looks down at one of his own dead bodies and laughs immaturely at how it looks – you’ll have to see the film to understand why.)

Horwin and Harris are capable leads, with Horwin having to do much of the emotional work. He proves himself highly capable of carrying such heaviness in his performance even in the midst of the R-rated cartoon his life has become, while Harris struggles at times to offer a consistent performance. I wouldn’t ever describe her role as being poorly presented, but she seems more comfortable with the smaller moments than the ones dependent on dramatic bravado. (Her comedic timing, however, is perfect.) Still, being that we’re dealing with low budget filmmaking, the ensemble is up to the task in ways you might not expect from reading the plot synopsis, and that goes for every performer. In keeping with the wackiness, the last few moments of Dead Dicks are, to be honest, befuddling, and I’m not sure how the ending will land with most viewers (I’m still working it around in my head), but one thing is for sure: if the out-there breakdown of Dead Dicks’ plot appeals to the part of you that’s become bored with mainstream genre filmmaking, then you’re already the intended audience and likely more willing to put the extra work into determining what it all means. If you can and do, be sure to drop me a line and tell me because I’m still in the dark.

Dead Dicks is now on Blu-ray and DVD from Artsploitation Films.