It's an undated 18th-century Austria, and two witch-hunters - Lord Cumberland (Henry Lom) and his apprentice, Count Christian von Meruh (Udo Kier), have come to a small village to root out its witchy influence. Already in attendance is Albino (pronounced Al-bee-no, and played by Reggie Nalder), the acting witch-hunter and all-around misogynist, who accuses any woman of witchcraft if she does not submit to his sexual demands. At first, Lord Cumberland seems to be rational, punishing Albino for his behavior and removing him from his service, but Cumberland soon lets the power go to his head and acts on his sexual desires much in the same way. His young apprentice has no choice to rebel, and that may have more than a little to do with the fact that he's begun falling in love with the beautiful and sultry Vanessa Benedikt (Olivera Katarina). Things soon spiral out of control as Lord Cumberland and his peons begin accusing the most random of people as being in league with the devil; the biggest offense, it would seem, is causing impotence in men.

Talk about a limp reason! (Terrible.) 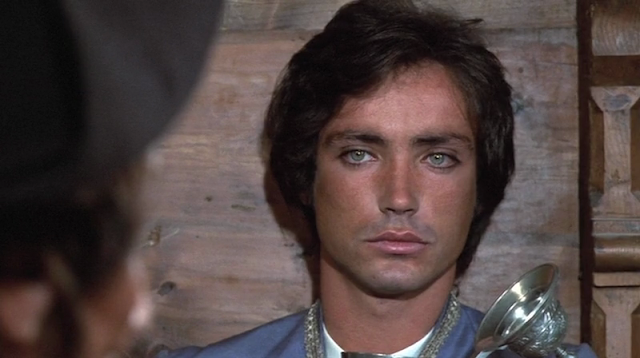 Goddamn, Udo Kier was handsome in his youth, wasn't he? What a handsome man! Look at those eyes! Why was he never cast as a James Bond villain? He's the perfect amount of handsome and miscellaneous European. They should have cast him in “A Man Too Handsome,” and James Bond would’ve fought how handsome he was. (This would have been one of the Timothy Dalton ones.) Man, I wish he'd come save me from Henry Lom!

Uh oh, I've really gotten off track here. I better get back to the film.

It goes without saying that Mark of the Devil, more than anything, is about men forcing their dominion over women, threatening them with torture and death should they not submit to their sexual whims. The majority of the men in the film are either villainous, or spineless and weak. Count von Meruh is the only decent male and ultimately ends up paying the price for it. Take that, add a few scenes of bodily torment, and what you have is an exploitation film masquerading as European gothic, but despite those specific tropes, Mark of the Devil did well enough financially that a sequel was commissioned, which maintains a religious vibe, retains Reggie Nalder in a different (and again villainous role), and tosses out the rest.

Mark of the Devil was a reactionary film based mostly off the success of 1968's Witchfinder General starring Vincent Price. Though the two films share a similar plot (that of witch-finding/destroying), Mark of the Devil is fine existing in shadow of the former so long as it gets to inflict all kinds of pain against its characters as well as revulsion against its audience.

Upon the film's premiere, sick bags were handed out to theatergoers who were there to see what was being marketed as "positively the most horrifying film ever made," which had been rated "V for violence." What that means in modern speak, by which time films that include a man's penis being bitten off and eaten by piranha have the potential to go theatrical, is that forty years later, it all plays rather tamely. Despite the tongues being ripped out and the bodies being stretched on the rack and the bed of nails poking all the butts, it doesn't quite retain the same amount of shock and horror as it did then. Normally that wouldn't be a big deal, since that's not the reason one should go see a film - regardless of it being horror – but that's really all Mark of the Devil had to which it could lay claim at that time. If we're being fair, it was an unoriginal plot conceived by piggy-backing off another infamous horror film (that underwent its own cuts to avoid getting a "V for violence" rating [just kidding, that doesn't exist]), but after all these years, the shock of the "violence" has worn off. Because of that, there’s not much else to carry the film beyond the array of very interesting and memorable performances (the best probably being the absolutely slimy role of Albino by Reggie Nalder).

Obviously, films have no choice, regardless of when they take place, but to reflect the zeitgeist of the times, and Mark of the Devil is no exception. While it was the brutality that drove audiences to see the film after word-of-mouth had begun spreading, it undoubtedly played much differently back then compared to how it plays today. Thankfully, though time has counteracted the appeal it once had, enough was left in place to justify first-timers to give it a chance. Of all the films made during this era, it's more that Mark of the Devil is one of the more infamous rather than the one of the better made, but that's okay. Sometimes that's reason enough. 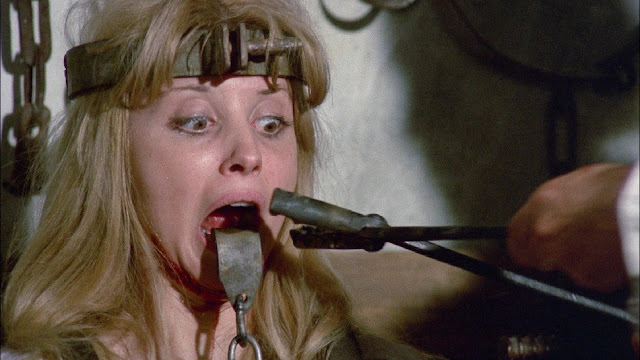